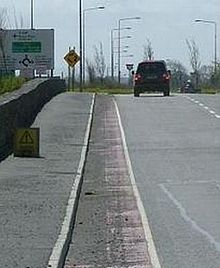 Debris in a cycle lane

Road debris, a form of road hazard, is debris on or off a road. Road debris includes substances, materials, and objects that are foreign to the normal roadway environment. Debris may be produced by vehicular or nonvehicular sources, but in all cases it is considered litter.[1]

Road spray (or just spray)[2] or tire kickup is road debris (usually liquid water) that has been kicked up, pushed out, or sprayed out from a tire.

Examples of road debris include:

Road debris is a hazard[5] that can cause fishtailing and damage like a flat tire or even a traffic accident with injury[6] or death.[7][1] In 2004, a AAA Foundation for Traffic Safety study revealed that vehicle-related road debris caused 25,000 accidents--and nearly 100 deaths--each year.[7][1] At highway speeds, even small debris can be deadly.[1] On June 16, 1925, in the United States, a passenger train carrying German and American tourists from Chicago, Illinois to Hoboken, New Jersey struck debris washed into a road crossing and derailed during a heavy thunderstorm.[8] More recently, in 2002, Washington State had 350 car accidents involving litter or road debris.[9] Collision with road debris resulted in a solar vehicle accident at the World Solar Challenge 2007 in Australia.

[Road] debris, for the most part, tends to collect in areas where two-track vehicles such as cars and buses do not drive. In urban areas, this tends to be on the edges [shoulder] and on the crown of the road and frequently collects around traffic islands and junctions. In rural areas, this tends to be in the middle of the lane and on the outside of corners and bends.[10] Road debris can be especially dangerous to bicyclists, who may have to travel outside the cycle lane and into traffic, to avoid debris. Flooding can occur if storm drains are not kept clear of road debris. In motorsport racing, road debris can cause loss of traction and subsequent crashes. Usually, the yellow caution flag will be used to indicates some a track hazard and the pace/safety car will come out.

Road debris can also cause other more specific problems and damage to vehicles. Rocks can hit the catalytic converter and cause the internal mat to break and clog the converter.[11] Several recalls have occurred due to road debris. The 2005 Scion TC's wind deflector was recalled because of potential shatter from road debris impact.[12] The 2004 Mitsubishi Endeavor was recalled in February 2010 due to possible mixture of road salt and road debris (mud) being trapped between a reinforcing bracket and the fuel filler pipe, potentially causing corrosion.[13] The 2001 Chevrolet C/K chassis cab truck was also recalled due to a possible road debris impact problem with its pressure relief valves.[14]

Road spray can cause reduced visibility and dramatically reduce the safety of motorists.[15] Over time, road spray and gunk from [a bicycle's] brake pads coat the rim, which interferes with stopping power.[16]

Large vehicles may throw up a lot of [road] spray when the roads are wet, which will make it difficult to see ahead. Dropping back further will move the driver away from the spray and allow better and greater visibility. Dropping back will also increase the following/separation distance between the spraying vehicle and the driver's vehicle. Using headlights (or fog lights) helps increase the driver's visibility too. Don't follow the vehicle in front too closely (or tailgate).[2]

A car bra can help reduce damage from minor road debris. Road spray is lessened on stone mastic asphalt and open-graded asphalt[15] and can be further reduced with a fender[17] (more so on a bicycle since most motor vehicles tend to already have fenders) and/or a mud flap. Street sweepers and winter service vehicles get rid of most road debris and the Adopt a Highway program also helps. Road signs and variable-message signs warn drivers of road debris.

Ocean Colour Scene, an English Britpop band, made a song about Birmingham, England called "Debris Road" (reputed to be about the road running past the band's recording studios in Ladywood) on their Marchin' Already 1997 album.[18]

Some video games (particularly racing games) include road debris that will damage the vehicles or obstruct their vision.[19] Spy Hunter (1983) features slippery icy roads and puddles, oil slicks, and smokescreen. MotorStorm (2007) has mud that flies around and gets painted accurately onto the body of each vehicle in real-time. Players can use this airborne grime to their advantage: a chunk of debris might knock an opponent clean off their motorcycle, or a mud spatter on their wind-shield might temporarily blind them.[19] Fuel (2009) features "crazy windstorms that kick up leaves and debris".[20]