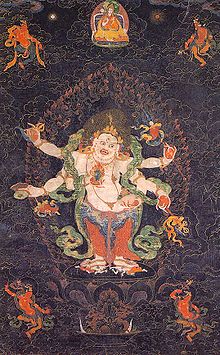 Mahākāla (Sanskrit) is a Dharmapala ("protector of dharma") in Vajrayana Buddhism, and a deity in Chinese and Japanese Buddhism, particularly in the Vajrayana school. He is known as Daheitian (大黑天) in Chinese and Daikokuten (大黒天) in Japanese. Mahākāla belongs to the fourth hierarchy of deities.

In Hinduism, Mahakala is a name of Shiva (as, for example, at the Shiva temple in Ujjain that is more than once mentioned by Kālidāsa), but it is also a name of one of his principal attendants (Sanskrit: gaṇa): along with Nandi, which is one of Shiva's watchmen, and so is often represented outside the main doorway of early North Indian temples.

Mahākāla is a Sanskrit bahuvrihi of mahā (महत्; "great") and kāla (कल; "Black"). The literal Tibetan translation is "Nagpo Chenpo" (Wylie: nag po chen po) though, when referring to this deity, Tibetans usually use the word "Gonpo" (mgon po) [the translation of the Sanskrit word Nāth meaning "lord" or "protector"] instead.

Mahākāla is relied upon in all schools of Tibetan Buddhism. However, he is depicted in a number of variations, each with distinctly different qualities and aspects. He is also regarded as the emanation of different beings in different cases, namely Avalokiteshvara (Tib: spyan ras gzigs) or Chakrasamvara (Tib: Korlo Demchog, Wylie: ’khor lo bde mchog).

Mahākāla is typically black in color. Just as all colors are absorbed and dissolved into black, all names and forms are said to melt into those of Mahakala, symbolizing his all-embracing, comprehensive nature. Black can also represent the total absence of color, and again in this case it signifies the nature of Mahakala as ultimate or absolute reality. This principle is known in Sanskrit as "nirguna", beyond all quality and form, and it is typified by both interpretations.

Mahākāla is almost always depicted with a crown of five skulls, which represent the transmutation of the five kleshas (negative afflictions) into the five wisdoms.

The most notable variation in Mahākāla's manifestations and depictions is in the number of arms, but other details can vary as well. For instance, in some cases there are Mahakalas in white, with multiple heads, without genitals, standing on varying numbers of various things, holding various implements, with alternative adornments, and so on. 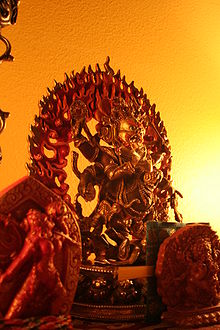 a rupa of a six-arm Mahakala

Nyingshuk came from Khyungpo Naljor, the founder of the Shangpa Kagyu, and spread to all the lineages—Sakya, Nyingma, and Geluk, as well as various Kagyu lineages. There are also Terma lineages of various forms of Six Armed Mahākāla. Nyinghsuk, though derived from the Shangpa, is not the major Shangpa one—it's in a dancing posture, rather than standing straight up, and is a very advanced Mahakala practice.

Various Four-armed Mahākālas (Skt. Chatur-bhuja Mahākāla, Tib. Wylie: mGon po phyag bzhi pa) are the primary protectors of the Karma Kagyu, Drikung Kagyu and the Drukpa Lineage of Tibetan Buddhism. A four-armed Mahākāla is also found in the Nyingma school, although the primary protector of the Great Perfection (Skt: Mahasandhi, Tib. Dzogchen) teachings which are the pinnacle of the Nyingma system is Ekajati. 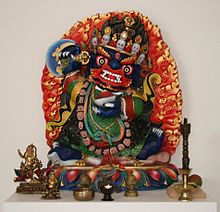 The two-armed Mahākāla called Bernakchen (Black Coat) is a protector of the Karma Kagyu school, although he derives from Nyingma terma and was adopted by the Karma Kagyu during the time of 2nd Karmapa, Karma Pakshi. He is often depicted with his consort Rangjung Gyalmo. (He is often thought to be the primary protector, but he is actually the main protector of the Karmapas specifically. Mahākāla Chakshipa, a four-armed mahakala, is technically the primary protector. Chakdrupa, a six-armed mahakala, is also common in the Kagyu.)

Panjaranatha Mahākāla, 'Lord of Charms" or "Lord of the Pavilion", an emanation of Manjushri is a protector of the Sakya order. 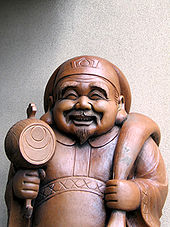 Mahākāla (known as Daikokuten 大黑天) enjoys an exalted position as a household deity in Japan, as he is one of the Seven Lucky Gods in Japanese folklore. Mahākāla's association with wealth and prosperity gave rise to a strange custom known as Fuku-nusubi. This custom started with the belief that one who stole divine figures (gods and goddesses) was assured of good fortune, if not caught in the act of stealing. In the course of time stealing of divine images became so common a practice in Japan that the Toshi-no-ichi or the ‘year-end-market’ held in the Asakusa Kannon temple became the main venue of the sale and disposal of such images by the fortune-seekers. Many small stalls were opened where articles including images of Mahakala were sold on the eve of New Year celebrations.

The Japanese also use the symbol of Mahākāla as a monogram. The traditional pilgrims climbing the holy Mount Ontake wear tenugui on white Japanese scarves with the Sanskrit seed syllable of Mahākāla.

In Japan, this deity is variously considered to be the god of wealth, or of the household, particularly the kitchen. He is recognised by his wide face, smile, and a flat black hat, in stark contrast to the fierce imagery portrayed in Tibetan Buddhist art. He is often portrayed holding a golden mallet, otherwise known as a magic money mallet, and is seen seated on bales of rice, with mice nearby (mice signify plentiful food).