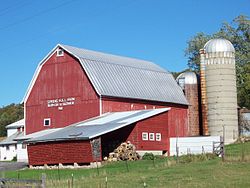 A family farm is a farm owned and operated by a family,[1] and often passed down from generation to generation. It is the basic unit of the mostly agricultural economy of much of human history and continues to be so in developing nations. Alternatives to family farms include those run by agribusiness, colloquially known as factory farms, or by collective farming.

As defined by USDA regulations to farm loan programs (e.g. those administered by the Farm Service Agency), a family farm is a farm that

Perceptions of the family farm

In developed countries the family farm is viewed sentimentally, as a lifestyle to be preserved for tradition's sake, or as a birthright. It is in these nations very often a political rallying cry against change in agricultural policy, most commonly in France, Japan, and the United States, where rural lifestyles are often regarded as desirable. In these countries, strange bedfellows can often be found arguing for similar measures despite otherwise vast differences in political ideology. For example, Patrick Buchanan and Ralph Nader, both candidates for the office of President of the United States, held rural rallies together and spoke for measures to preserve the so-called family farm. On other economic matters they were seen as generally opposed, but found common ground on this one.

The social roles of family farms are much changed today. Until recently, staying in line with traditional and conservative sociology, the heads of the household were usually the oldest man followed closely by his oldest sons. The wife generally took care of the housework, child rearing, and financial matters pertaining to the farm. However, agricultural activities have taken on many forms and change over time. Agronomy, horticulture, aquaculture, silviculture, and apiculture, along with traditional plants and animals, all make up aspects of today's family farm. Farm wives often need to find work away from the farm to supplement farm income and children sometimes have no interest in farming as their chosen field of work.

Bolder promoters argue that as agriculture has become more efficient with the application of modern management and new technologies in each generation, the idealized classic family farm is now simply obsolete, or more often, unable to compete without the economies of scale available to larger and more modern farms. Advocates argue that family farms in all nations need to be protected, as the basis of rural society and social stability.

Viability of the family farm 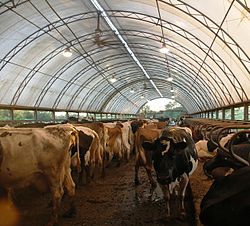 Depending on the type and size of independently owned operation, some limiting factors are:

Over the last century, the people of developed nations have collectively taken most of the steps down the path to this situation. Individual farmers opted for successive waves of new technology, happily "trading in their horses for a tractor", increasing their debt and their production capacity. This in turn required larger, more distant markets, and heavier and more complex financing. The public willingly purchased increasingly commoditized, processed, shipped and relatively inexpensive food. The availability of an increasingly diverse supply of fresh, uncured, unpreserved produce and meat in all seasons of the year (oranges in January, freshly killed steers in July, fresh pork rather than salted, smoked, or potassium-impregnated ham) opened an entirely new cuisine and an unprecedented healthy diet to millions of consumers who had never enjoyed such produce before. These abilities also brought to market an unprecedented variety of processed foods, such as corn syrup and bleached flour. For the family farm this new technology and increasingly complex marketing strategy has presented new and unprecedented challenges, and not all family farmers have been able to effectively cope with the changing market conditions.

Family farms in the 21st century 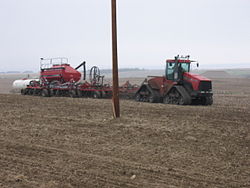 It is arguable whether any sort of "idyllic" life existed for most of the millions of family farms that have disappeared in recent decades. At the beginning of 20th century, an average farm in North America produced much less food per acre than it does nowadays. A likely conclusion is that for a time in the middle decades of the last century, a large number of farms achieved a temporarily comfortable position by capitalizing on rapidly emerging new technologies, markets, and growth-oriented philosophies. As growth and "production efficiency" kept increasing, this position began to reverse noticeably, at least by the 1970s. The number of farms, and of farm families living on the land, has dropped every decade in the United States since 1920. In part this was a function of economies of scale and competitive pressures. In part it may be perceived as an indication that "family farming", in its raw, realistic form, is just plain hard work, with limited social and cultural opportunities, and competes poorly as an occupation and a "lifestyle" with urban and suburban opportunities.

In the current situation, for the independent "family farmer" to regain any sort of practical economic independence, it would seem necessary that the entire food industry be restructured. Furthermore, given the extreme number of defunct family farms, it is not so much a matter of saving or preserving the family farm (whatever it was, it is effectively already gone), but of using the remaining knowledge, expertise and farms as the framework for the "new family farm." A serious question, however, is whether the entire food system should be "restructured" in order to preserve a failed or perhaps mythological ideal, or whether the population of the world, now approaching 7 billion people, will be sustained by a return to labor-intensive farming and local mom and pop marketing practices. The answer, however, can hardly be considered immediately obvious, especially since many of these 7 billion people might find they prefer growing food to current urban lower-class options such as data entry, food service, and telemarketing. 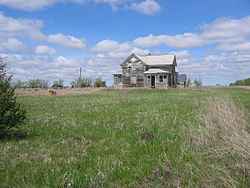 As an example of the evolution of the "family farm", the history of North Dakota is illuminating. Although originally developed as enormous "bonanza farms" in the 1870s, these were broken up and sold off into smaller holdings and other parts of the state were homesteaded in quarter section (160-acre (0.65 km2)) farms. The state was predominantly farmed by individuals and families by the 1920s and 1930s. The state enjoyed a populist boom in the early 20th century, as farmer-controlled legislatures seized control of the marketing and sale of agricultrual products and placed it in state-sponsored "cooperatives" to enable smaller producers to escape the grip of the railroads and the industrialized food merchants. These retrograde polices have long since been abandoned as unrealistic and unsustainable. In 2007, most farmland in North Dakota remains owned by individuals. Corporate ownership of farmland has been illegal since a statewide voter initiative in 1933. The scale of agriculture in North Dakota, however, is a far cry from the idyllic conception of an intimate hands-on family operation of mixed agriculture. The typical dry-land wheat farm in North Dakota consists of several thousand acres with equipment on a scale to match. The produce of these farms is assembled on 120-car trains and shipped to distant markets as part of the international stream of commerce. 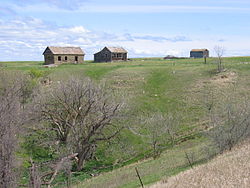 Farms such as this typically are aggregations of fifteen, twenty or more homesteaded quarter sections of land (160 acres (0.65 km2)) which at one time contained "family farms", as witnessed by the numerous abandoned farmsteads, ghost towns, and abandoned country churches and cemeteries memorializing a much larger rural population that is long since disappeared forever. The countryside is depopulated, as the 160-acre (65 ha) homesteads of settlers from the 1890s to 1920s were uneconomic and their inhabitants misled or misguided into believing they were viable.

The thousands of abandoned or obliterated farmsteads and other evidence of rural depopulation in North Dakota, including many now-vacant and deteriorated homesteads which were thriving family farms into the 1970s, are a counterpoint to romantic notions of "family farming" in the 21st century.

Local food and the organic movement

In the last few decades there has been a resurgence of interest in organic and free range foods. A percentage of consumers have begun to question the viability of industrial agriculture practices and have turned to organic groceries that sell products produced on family farms including not only meat and produce but also such things as wheat germ breads and natural lye soaps (as opposed to bleached white breads and petroleum based detergent bars). Others buy these products direct from family farms. The "new family farm" provides an alternative market in some localities with an array of traditionally and naturally produced products.

Such "organic" and "free-range" farming is attainable where a significant number of affluent urban and suburban consumers willingly pay a premium for the ideals of "locally produced produce" and "humane treatment of animals". Sometimes, these farms are hobby or part-time ventures, or supported by wealth from other sources. Viable farms on a scale sufficient to support modern families at an income level commensurate with urban and suburban upper middle class families are often large scale operations, both in area and capital requirements. These farms, family owned and operated in a technologically and economically conventional manner, produce crops and animal products oriented to national and international markets, rather than to local markets. In assessing this complex economic situation, it is important to consider all sources of income available to these farms; for instance, the millions of dollars in farm subsidies which the United States government offers each year. As fuel prices rise, foods shipped to national and international markets are already rising in price.