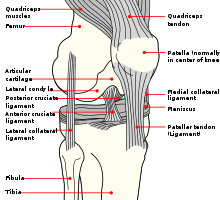 Illustration of the ligaments of the knee, including the anterior and posterior cruciate ligaments

Cruciate ligaments (also cruciform ligaments) are pairs of ligaments arranged like a letter X.[1] They occur in several joints of the body, such as the knee. In a fashion similar to the cords in a toy Jacob's ladder, the crossed ligaments stabilize the joint while allowing a very large range of motion.

The adjective cruciate is from the Latin crux, crucis, meaning "cross".

In Classical Latin, the verb cruciare means "to torture". By the time in the Late Latin period when Latin medical terminology was being established, this old meaning of cruciare seems to have fallen out of use in common speech, and the word was re-invented with the meaning "arrange in cross shape". Use of "cruciat-" to refer to torture is now obsolete in English, but this old usage is shown in the common English word excruciating, and in the "Cruciatus" curse in the Harry Potter fictional scenario.

Cruciate ligaments occur in the knee of humans and other bipedal animals and the corresponding stifle of quadrupedal animals, and in the neck, fingers, and foot.

Rupture of the cranial cruciate ligament is one of the "most frequent acquired diseases of the stifle joint"[5] in humans, dogs, and cats; direct trauma to the joint is relatively uncommon and age appears to a major factor.[5]

Cruciate ligament injuries are common in animals, and in 2005 a study estimated that $1.32 billion was spent in the United States in treating the cranial cruciate ligament of dogs.[6]