Continental Motors, Inc. is an aircraft engine manufacturer located in Mobile, Alabama. Originally spun off from Continental Motors Company in 1929 and owned by Teledyne Technologies until December 2010, the company is part of AVIC International, which is owned by the government of the People's Republic of China.[1][2]

Although Continental is most well known for its engines for light aircraft, it was also contracted to produce the air-cooled V-12 AV-1790-5B gasoline engine for the U.S. Army's M47 Patton tank and the diesel AVDS-1790-2A and its derivatives for the M48, M60 Patton and Merkava main battle tanks. The company also produced engines for various independent manufacturers of automobiles, tractors, and stationary equipment (pumps, generators and machinery drives) from the 1920s to the 1960s. 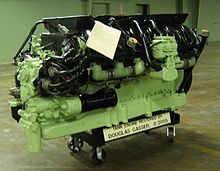 In 1929 the company introduced its first aircraft engine, a seven-cylinder radial designated as the A-70, with a displacement of 543.91 cu in (8.91L) that produced 170 hp (127 kW). In August 1929, the Continental Motors Company formed the Continental Aircraft Engine Company as a subsidiary to develop and produce its aircraft engines.[3]

As the Great Depression unwound, 1930 saw the company introduce the 37 hp (28 kW) A-40 four-cylinder engine. A follow-on design, the 50 hp (37 kW) A-50 was introduced in 1938 and was used to power the Taylor Cub and derivative Piper Cub. As the Second World War started in 1939 Continental commenced building aircraft engines for use in British and American tanks. Continental formed Continental Aviation and Engineering (CAE) in 1940 to develop and produce aircraft engines of over 500 hp (373 kW)[3]

In 1969, Teledyne Incorporated acquired Continental Motors, which became Teledyne Continental Motors (TCM).[4] That same year, the Continental Tiara series of high output engines were introduced, although they were dropped from the line after 1978. The company brought the TSIO-520-BE for the Piper PA-46 to market in 1984 and it set new efficiency standards for light aircraft piston engines. Powered by a liquid-cooled version of the IO-240, the Rutan Voyager was the first piston-powered aircraft to circumnavigate the world without refueling in 1986.

NASA selected Continental to develop and produce GAP in 1997, a new 200 hp (150 kW) piston engine to operate on Jet-A fuel. This was in response to 100-octane aviation gasoline becoming less available as a result of decreased demand, due to smaller turboprop engines becoming more prevalent. 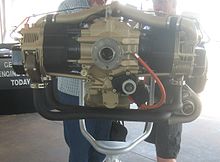 In 2008, Teledyne Continental's new president, Rhett Ross announced that the company was very concerned about future availability of 100LL avgas and as a result would develop a diesel engine in the 300 hp (220 kW) range for certification in 2009 or 2010.[5] By the fall of 2009 the company was feeling the effects of the economic situation and the resulting reduced demand for aircraft engines. The company announced that it would close its plant for two one-week periods in October 2009 and January 2010. Salaried employees would move to a four-day work week with one week vacations for Thanksgiving and Christmas, with the aim "to protect as much of our valuable employee base as possible".[6]

On December 14, 2010, Continental's parent Teledyne announced that Teledyne Continental Motors, Teledyne Mattituck Services and its general aviation piston engine business would be sold to Technify Motor (USA) Ltd, a subsidiary of AVIC International, for US$186 million in cash. AVIC is owned by the Chinese government. In May 2011, the transaction was reported as complete and the company renamed Continental Motors, Inc.[1][2][7] 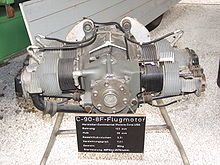