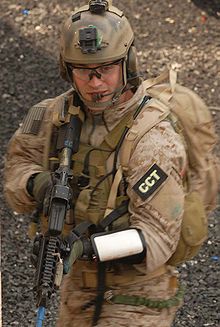 Air Force Combat Controller Staff Sergeant Zachary J Rhyner on patrol with an Army Special Forces team in Afghanistan. SSgt Rhyner was awarded the Air Force Cross for his actions on 6 April 2008 in the Shok Valley of Afghanistan.

CCT Motto: "First There," reaffirms the Combat Controller's commitment to undertaking the most dangerous missions behind enemy lines by leading the way for other forces to follow.

Combat controllers are among the most highly trained personnel in the US military. They maintain air traffic controller qualification skills throughout their career in addition to other special operations skills. Many qualify and maintain currency in joint terminal attack control procedures. Their 35-week initial training and unique mission skills earn them the right to wear the scarlet beret. From that point they attend a 12-15 month advanced skill training course to obtain a 5 skill level.

This course teaches techniques for survival in remote areas. Instruction includes principles, procedures, equipment and techniques that enable individuals to survive, regardless of climatic conditions or unfriendly environments, and return home.[2]

United States Army pathfinders originated in 1943 out of need for accurate airdrops during airborne campaigns of World War II. These pathfinders preceded main assault forces into objective areas to provide weather information and visual guidance to inbound aircraft through the use of high-powered lights, flares and smoke pots.

When the Air Force became a separate service, Air Force pathfinders, later called combat control teams, were activated in 1953 to provide navigational aids and air traffic control for a growing Air Force. In the Vietnam War, combat controllers helped assure mission safety and expedited air traffic flow during countless airlifts. Combat controllers also flew as forward air guides in support of indigenous forces in Laos and Cambodia. It has been reported that Combat Controllers conducted covert forward air control for U.S. and allied aircraft performing interdiction missions against Communist troops and supplies on the Ho Chi Minh trail. Combat controllers were also present during the earthquakes in Haiti where they set up and coordinated airplanes to land and take off at airfields that had been heavily damaged in the quake.