Citizen Holdings Co., Ltd. (シチズンホールディングス株式会社, Shichizun Hōrudingusu Kabushiki-gaisha?) (TYO: 7762) is the core company of a Japanese global corporate group based in Tokyo, Japan. The company was originally founded as Shokosha Watch Research Institute in 1918 and is currently known as the manufacturer of CINCOM precision lathe machine tools as well as CITIZEN watches. The trade name originated from a pocket watch CITIZEN sold in 1924. It is one of the world's largest producers of watches. 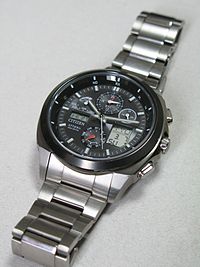 Eco-Drive watches use a battery recharged by a solar panel hidden under the watch face. In the rare and discontinued Eco-Drive Duo series, the solar power was supplemented by an automatic quartz power source. There was also an Eco-Drive Thermo model that exploited temperature differentials between the wearer's skin temperature and ambient temperature to recharge the battery. However, the only Eco-Drive system currently described on the Citizen Watch Official Web Site is the one depending solely on light to recharge. The Eco-Drive feature is similar to the Tough Solar battery charging system used in G-Shock watches by Casio. All Citizen Eco-Drive models are made in Japan but may also be assembled in China.

The Skyhawk A-T line of watches features Radio Controlled Timekeeping. The watches can synchronize with radio clocks in Japan, North America, and Europe and will automatically select the correct frequency for doing so based upon location of home time zone. The watch actually tracks two time zones--home and world—but synchronizes to the 'home' zone. When traveling, the user may swap the 'home' and 'world' zones—thereby enabling proper time signal reception on a different continent while retaining the other time. The day, date, and Daylight Saving Time settings are also set automatically when the watch is synchronized. These features are comparable to the synchronization with atomic clocks found in Casio Wave Ceptor watches.

Citizen also manufactures watches for collectors. For example, a watch bearing the colors and logo of the Blue Angels. This watch is part of the Skyhawk A-T line, which utilizes Eco-Drive as its primary power source and features Atomic Timekeeping. The bezel of the watch includes a slide rule useful for calculating time, distance, speed, conversions, and other computations useful for pilots. The Blue Angels use blue and gold as their trademark colors and the watch bears this color scheme. In the UK, a version of the same watch bears the colours and logo of the Red Arrows, the Royal Air Force's world-famous acrobatic display team.

The Deployment Clasp with a Push Button (DCP) is a clasp available for many Citizen watch bracelet bands. The clasp, as with the Calibre 8700, is also used with leather bands as if they were metal bracelet-style watchbands; however, when the clasp is fastened, the band appears to be a normal eye-hole and link pin leather watchband.

Apart from watches, Citizen also manufactures calculators and small electronic organizers. Some non-watch devices such as handheld televisions and computer printers, have been marketed under the Citizen brand name.

In the early-mid 1990s, Citizen partnered with Compaq Computer Corporation to build notebook computers in Japan for the Japan and Far Eastern market to be sold under the Compaq name. 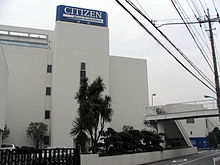 Head office of the Citizen Watch holding company in Tokyo