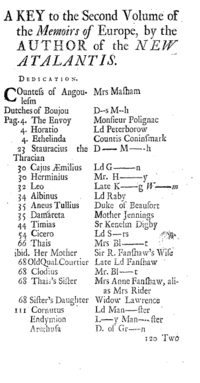 Roman à clef or roman à clé (French pronunciation: [ʁɔmɑ̃n‿a kle]), French for "novel with a key", is a phrase used to describe a novel about real life, overlaid with a façade of fiction.[1] The fictitious names in the novel represent real people, and the "key" is the relationship between the nonfiction and the fiction.[2] This "key" may be produced separately by the author, or inferred through the use of epigraphs or other literary devices.[3]

Created by Madeleine de Scudery in the 17th century to provide a forum for her thinly veiled fiction featuring political and public figures,[4] roman à clef has since been used by writers as diverse as Victor Hugo, Phillip K. Dick, and Salman Rushdie.

The reasons an author might choose the roman à clef format include satire; writing about controversial topics and/or reporting inside information on scandals without giving rise to charges of libel; the opportunity to turn the tale the way the author would like it to have gone; the opportunity to portray personal, autobiographical experiences without having to expose the author as the subject; avoiding self-incrimination or incrimination of others that could be used as evidence in civil, criminal, or disciplinary proceedings; and the settling of scores.