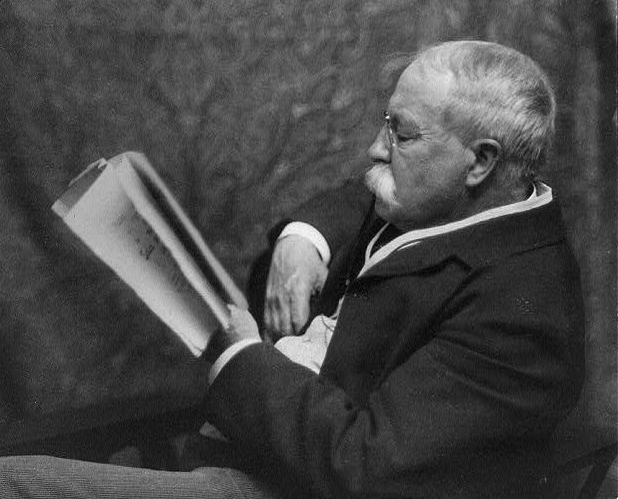 Born in , originally Martinsville, to William Cooper and Mary Dean Howells, Howells was the second of eight children. His father was a newspaper editor and printer, and moved frequently around . Howells began to help his father with typesetting and printing work at an early age. In 1852, his father arranged to have one of Howells' poems published in the "Ohio State Journal" without telling him.

In 1856, Howells was elected as a Clerk in the State House of Representatives. In 1858, he began to work at the "Ohio State Journal" where he wrote poetry, short stories, and also translated pieces from French, Spanish, and German. He avidly studied German and other languages and was greatly interested in . In 1860, he visited Boston and met with American writers , , Oliver Wendell Holmes, , , and .

Said to be rewarded for a biography of used during the election of 1860, he gained a consulship in . On Christmas Eve 1862, he married Elinor Mead at the American embassy in . Upon returning to the U.S., he wrote for various magazines, including "" and "". From 1866, he became an assistant editor for the "Atlantic Monthly" and was made editor in 1871, remaining in the position until 1881. In 1869, he first met , which sparked a longtime friendship, although the friendship went sour over a disagreement about Twain's incessant cigar smoking. Howells was strongly against the use of tobacco and even appeared before Congress in 1883 to urge that its use be outlawed. Twain took offense and the friendship chilled for a decade. They reconciled in 1894 when Twain asked Howells to contribute to the Confederate Veteran's Fund he had organized to help one of his Civil War comrades pay for a new prosthetic limb. Even more important for the development of his literary style--his advocacy of Realism--was his relationship with the journalist , who in the 1870s wrote a series of articles for the "Atlantic Monthly" on the lives of ordinary Americans (Fryckstedt 1958).

He wrote his first novel, "", in 1872, but his literary reputation took off with the realist novel "", published in 1882, which described the decay of a marriage. His 1885 novel "" is perhaps his best known, describing the rise and fall of an American entrepreneur in the paint business. His social views were also strongly reflected in the novels "" (1888) and "" (1890). He was particularly outraged by the trials resulting from the .

Though Howells is known primarily as a novelist, his short story "Editha" (1905) appears in many anthologies of American literature.

Howells also wrote plays, criticism, and essays about contemporary literary figures such as , , , , and, especially, , which helped establish their reputations in the United States. He also wrote critically in support of American writers , , , , , , , , and . It is perhaps in this role that he had his greatest influence. In his "Editor's Study" column at the "Atlantic Monthly" and, later, at "Harper's", he formulated and disseminated his theories of "realism" in literature.

In 1904, he was one of the first seven chosen for membership in the , of which he became president. In 1928, eight years after Howells' death, his daughter published his correspondence as a biography of his literary years.

He was the father of the architect .

In defense of the real, as opposed to the ideal, Howells is quoted as saying, "I hope the time is coming when not only the artist, but thecommon, average man, who always 'has the standard of the arts in hispower,' will have also the courage to apply it, and will reject the idealgrasshopper wherever he finds it, in science, in literature, in art,because it is not 'simple, natural, and honest,' because it is not like areal grasshopper. But I will own that I think the time is yet far off,and that the people who have been brought up on the ideal grasshopper,the heroic grasshopper, the impassioned grasshopper, the self-devoted,adventureful, good old romantic card-board grasshopper, must die outbefore the simple, honest, and natural grasshopper can have a fair field." [ [http://www.fullbooks.com/Criticism-and-Fiction.html Criticism and Fiction] ," by William Dean Howells, accessed]