Michael Colin Cowdrey, Baron Cowdrey of Tonbridge, CBE (24 December 1932 – 4 December 2000), better known as Colin Cowdrey, was the Captain of Oxford University, Kent County Cricket Club and the England cricket team in a career that lasted from 1950 to 1976. He was the first cricketer to play in 100 Test matches and held the records for the most runs by a batsman and most catches by a fielder in Test cricket. His 22 Test centuries is an England record shared with Wally Hammond and Geoff Boycott and he toured Australia a record six times between 1954-55 and 1974-75. At Edgbaston in 1957 he added 411 against the West Indies with Peter May, the highest stand for England in Tests. Cowdrey's highest first class score was 307 against South Australia in 1962-63, a record for the MCC and for any tourist in Australia. He was made a Commander of the Order of the British Empire in 1972, a Knight in 1992, a Life Peer by the cricket-loving Prime Minister John Major in 1997 and was posthumously inducted into the ICC Cricket Hall of Fame on 24 June 2009.[1] As a batsman he was noted for his classical technique and sweet timing of the ball, the Australian reporter Johnny Moyes writing

His cover-drive was still his chief glory, but other shots were scarcely inferior: the glory of the moon and stars as opposed to the rich glory of the sun. There seemed to be no effort about his work. With a short back-swing he persuaded the ball through the gaps, guiding it with an iron hand inside the velvet glove which disguised his power and purpose.[2]

Colin Cowdrey was born in Bangalore, British India. His father named him Michael Colin Cowdrey, to give him the same initials as cricket's most famous club the Marylebone Cricket Club. He was educated at the Bishop Cotton Boys' School, Bangalore, Homefield Preparatory School, Sutton, Tonbridge School and Brasenose College, Oxford, which he left without taking a degree. He became the youngest player ever to appear in a match at Lord's when, at the age of 13, in July 1946 he played for Tonbridge against Clifton. He scored 75 and 44 and took eight wickets in the match. Four years later he made his first-class debut for Kent County Cricket Club, where he would remain a player until his retirement in 1976. He played for Oxford University in 1952-1954. He was appointed captain of Kent in 1956 and in 1970 he led Kent to their first County Championship since 1913.

In 1963, facing the West Indies in a Lord's Test match, he came in to bat with a broken wrist in plaster (fortunately he did not have to face a ball; if it had been necessary, he said he would have done so holding the bat with one hand). Had he not batted, England would have lost, but his appearance caused the match to be drawn.

At the beginning of the 1973 English season Cowdrey headed the list of the then all time highest aggregate Test match run scorers with 7700 runs. He ended his career after playing his final Test against Australia in 1974-75. He was called up for this series in the middle of the winter when England batsman had been ruled out due to injury after the 1st Test.[5] Although some in the Australian press ridiculed his recall at 41 (he had been preferred over younger batsmen thanks to good form in the previous season and experience of Australian conditions, although he had not played in Tests for 3½ years), he was given a warm reception when walking out to bat in the 2nd Test of that series at Perth and reported to have shown guts and good technique against the fast bowling of Dennis Lillee and Jeff Thomson, despite having not played cricket since the English summer and having only 3 days to prepare himself for the Test after a long, delay-stricken journey to Australia.[6][7][8] In making this tour he became only the second English player to tour Australia six times.[9] He had some success in the 2nd Test (his first match), making 22 and 41, but he struggled thereafter, ending the series with only 165 runs at 18.33.

In the Reliance ICC Test Player Batting Rankings [10], he was:

Following his retirement in 1976, Colin Cowdrey worked closely behind the scenes at Kent, became President of the MCC in 1986 and was Chairman of the International Cricket Council from 1989-1993. He was President of Kent County Cricket Club in 2000.

Cowdrey won a rackets blue in his first term at Oxford. He was also a useful golfer playing off a six handicap. He won a prestigious Pro-Am tournament at Turnberry with Brian Huggett. In 1970 he had a hole in one at the 195-yard first hole playing for the Cavaliers against Caymanus Golf Club in Kingston Jamaica.

Cowdrey was made a Commander of the Order of the British Empire (CBE) in 1972, received a knighthood in 1992, and became a life peer as Baron Cowdrey of Tonbridge, of Tonbridge in the County of Kent in 1997, on the recommendation of outgoing Prime Minister John Major, to whom he had become a personal friend and confidant. Cowdrey was one of only two cricketers to be given a life peerage for their services to the game (the other being Learie Constantine).

In 1997 a cricket club in Cowdrey's hometown Tonbridge was renamed in his honour; Cowdrey Cricket Club (formerly Tonbridge Printers CC) plays in the Readers Kent Feeder League West, and can be found here: [1]

Colin Cowdrey made 22 Test Centuries to match Wally Hammond's England record, subsequently equalled again by Geoffrey Boycott. England suffered only one defeat in the 65 Tests in which Hammond, Cowdrey or Boycott made a hundred (when Cowdrey made 105 against South Africa at Trent Bridge in 1965, but England lost by 94 runs). Of the 22 Tests in which Cowdrey made a hundred they won 10, drew 11 and lost 1 and Cowdrey scored a Test century against all the Test teams he played both home and away. 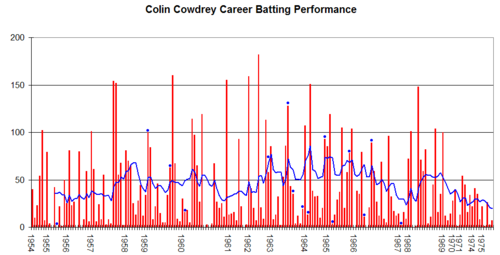 Red lines are Cowdrey's individual Test innings scores (blue dot indicates finished not out). Blue line is the average of the past ten innings

He was the first cricketer to play 100 Test matches. 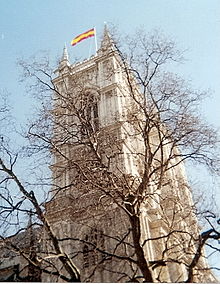 Lord Cowdrey died of a heart attack on 4 December 2000, aged 67, having suffered a stroke earlier that year. His memorial service at Westminster Abbey on 30 March 2001 was attended by many luminaries of the cricket world and the tribute was given by John Major. Major said:

"He left us too soon, but it was a gem of an innings. He lived life with a clear eye, a straight bat and a cover drive from heaven. He was a true Corinthian."

Colin, The Lord Cowdrey of Tonbridge, CBE, is buried in the churchyard of the tiny Pre-Conquest church of St Nicholas in Poling, West Sussex, the church that he attended regularly. The epitaph on his simple headstone was written by John Woodcock and reads...

"...some journey, some life, some coverdrive, some friend."

The MCC Spirit of Cricket Cowdrey Lecture was inaugurated in 2001 in memory of the late Lord Cowdrey of Tonbridge, a past President of MCC, who - together with another former Club President, Ted Dexter  was instrumental in the Spirit of Cricket being included as the Preamble to the 2000 Code of the Laws of Cricket. Famous cricket personalities share their own experience for the Spirit Of Cricket. Among other cricketers and renowned dignitaries who have delivered the lectures in the past, include Geoffrey Boycott, Imran Khan and Archbishop Desmond Tutu. In the year 2009, Adam Gilchrist gave the famous speech. The 11th MCC Spirit of Cricket Cowdrey Lecture was given by the Sri Lanka cricket captain Kumar Sangakkara at Lord's on July 4 2011. It was an hour-long speech for which he received a standing ovation.