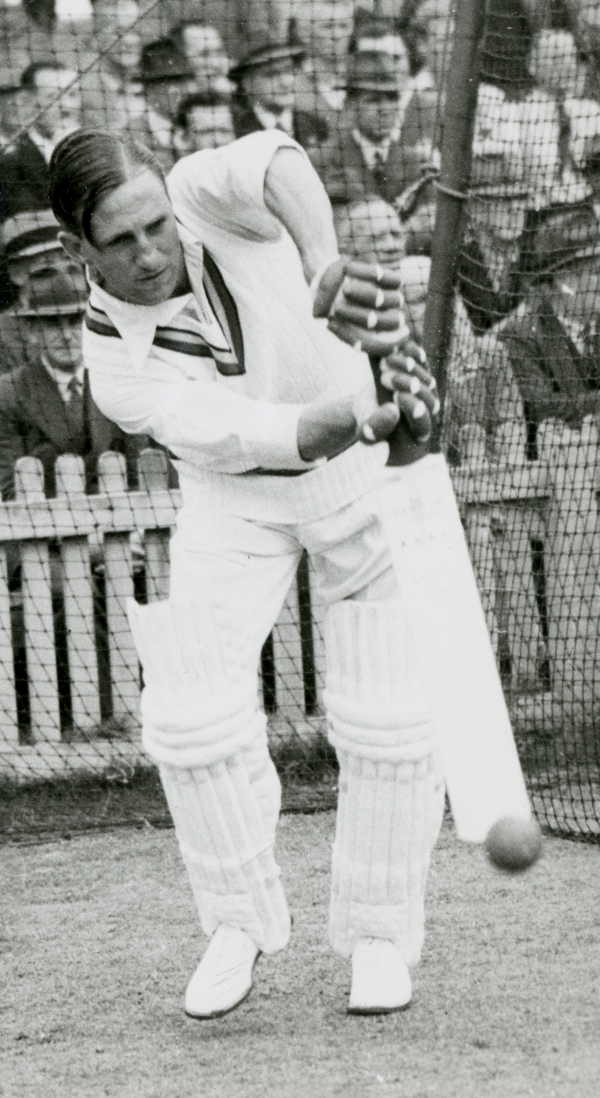 Sir Leonard Hutton (born , in Fulneck near , , died , in , ) was an English er, who dominated the national and international cricket scene for the decade after the and was honoured with the England team captaincy, breaking an age-old tradition (see ) that the position could be held only by an amateur.

He was born into a keen cricketing family. From an early age the young Leonard immersed himself in cricket and became an avid student of the art of batting. , the Yorkshire and England , said he could not teach him anything about batting when Hutton was fourteen. Hutton learned from players such as , , , and .

He made his first-class debut for Yorkshire in 1934 at the age of 17; in 14 championship matches that season he scored five fifties and his maiden first-class century. From an early age his batting was skilful and showed ability to deal with all types of pitches&mdash;these were the days of uncovered wickets.

Hutton made his Test-match debut against New Zealand in 1937 and hit his first Test century at Old Trafford in only his second Test. A year later he was to break 's record for the highest individual score in Test matches with 364, which remains the highest Test innings by an Englishman. This innings was at in 1938, against Australia, and took 13 hours 20 minutes, a stupendous feat of concentration for a 22-year-old. The following year, he thrilled the crowds with his attacking play in scoring 196 against the West Indian attack in the Lord's Test (the last 96 runs coming in 95 minutes). He finished the series on a high with 165 not out at The Oval.

saw Hutton serve as a sergeant in the regiment of the as a physical training instructor where he badly broke his left arm in a gymnasium accident. He had to have bone grafts to repair the damage and, after eight months in hospital, had a left arm two inches shorter than his right.

Although this injury seemed not to affect his subsequent career (his Test average was higher after the war than before), it must have played on his mind, knowing a blow on his left forearm could have ended his career. Perhaps this injury increased his innate sense of caution&mdash;Hutton could be a wonderful attacking batsman when in the mood and could play every stroke in the book. But more often than not the burden of carrying England’s batting saw him adopt a much more circumspect approach: he was a hard-headed, practical man who described himself as being a "roundhead" in contrast to Compton’s cavalier. But all are agreed that when he let himself go he could be a glorious batsman, his innings of 37 out of 49 at the Sydney Test of 1946/47 was scintillating and had older members of the crowd recalling the legendary .

The first post-war series against Australia in 1946/47 was a difficult one for England, perhaps it came too soon after the war and English cricket had not returned to its pre-war standard. The squad was too old and the younger players such as Evans and Bedser were not yet established. Hutton, however, showed he could still do the business with a century in the last Test.

1948 saw him dropped for the only time in his Test career&mdash;against Bradman's legendary Australian team. His omission was controversial and Hutton was restored to the side for the next Test. He scored steadily over the rest of the series, with three half centuries and a 30 which was the top score in England's innings of 52 at The Oval.

The early 1950s saw Hutton establish himself as England's batting rock. He alone mastered the West Indian spin duo of Ramadhin and Valentine, scoring 202 not out in the 1950 Oval Test. (England made 344; this is the one of the lowest Test totals to include a double century.

In 1952 he was appointed as England's first professional captain for 65 years. Many people in cricket's establishment were against this break with tradition but Hutton simply got on with the job. Victory against India in 1952 was followed by regaining in 1953 against 's Australians. On the other hand, his county, Yorkshire, continued to appoint only an amateur as captain.

He registered a notable achievement in the 1953/54 series in the West Indies; England began 2-0 down in the Test series, provoking much rancour and criticism. With customary determination and resolve, Hutton led England to victory in two Tests, drawing the series 2-2.

1954/55 saw Hutton lead England on tour to Australia. After putting the home side into bat and suffering a heavy defeat in the first Test at Brisbane, he led his side to victory in three of the remaining four Tests and a 3-1 series win. England was also well served by fast bowlers and , and by young batsmen Peter May and but the greatest credit attached to Hutton for his skill as a batsman and determination as captain.

He was knighted in 1956 for his services to cricket.

Hutton was appointed as one of the England Test team's selectors in 1975. He relinquished the role after the 1976 season.

He married Dorothy Dennis on 3 September 1939 and they had two sons, Richard and John. Their elder son became a successful cricketer for Repton, Cambridge University, Yorkshire and England. Richard's elder son captained Middlesex between 2005 and 2006.

He died from a ruptured aorta in , Norbiton, Surrey in September, 1990, aged 74, and was cremated at Putney Vale Crematorium.