Record of Lodoss War (ロードス島戦記, Rōdosu-tō Senki?) is a franchise of fantasy novels by Ryo Mizuno based around the work he originally created for a world called Forcelia for role-playing games (RPGs). There have since been multiple manga, anime and computer game adaptations, several of which have been translated into English. The plots generally follow the conventions and structure of the RPG systems including Dungeons & Dragons and Sword World RPG, being based around a party of several characters of distinct types undertaking a specific quest.

Record of Lodoss War was created in 1986 by Group SNE as a Dungeons & Dragons "replay" serialized in the Japanese magazine Comptiq. Replays are not novels, but transcripts of RPG sessions, meant to both hold the interest of readers and convey the events that took place. They have proven to be popular, even to those who do not play role-playing games but are fans of fiction (including fantasy fiction). Similar to light novels, many characters and parties in replays have become popular as characters of anime. An example of such a character is the female elf Deedlit in Record of Lodoss War, who was played by science fiction novelist Hiroshi Yamamoto during the RPG sessions.

The popularity of the Record of Lodoss War replays was such that the Dungeon Master Ryo Mizuno started to adapt the story into some of the earliest Japanese-language domestic high fantasy novels in 1988.

When the replay series went on to become a trilogy, Group SNE had to abandon the Dungeons & Dragons rules and create their own game, dubbed Record of Lodoss War Companion and released in 1989. All three parts of the replay series were eventually published as paperbacks by Kadokawa Shoten from 1989 to 1991:

The last volume of Mizuno's novelization was published by Kadokawa Shoten in 1993, and followed by two collections of short stories in 1995:

The manga (and its anime derivative) Record of Lodoss War centers around the adventures of a youth by the name of Parn, the son of a dishonored knight. Part of his motivation for adventuring is to find out what happened to his father, and to restore his family's honor. Despite his inexperience, Parn is considered the leader, who is accompanied by his childhood best friend Etoh, his friend and sometimes advisor Slayn (and later on Slayn's lover Leylia), and his newfound mentor Ghim. They are accompanied by Parn's romantic interest, the high elf Deedlit, who comes from the Forest of No Return seeking an answer to her people's isolationism and an end to what she sees as a slow march to extinction and a thief named Woodchuck. Throughout the series, Parn comes into contact with friends and foes alike. His allies include King Kashue, King Fahn, Shiris, and Orson; his enemies include Emperor Beld, Ashram, and the evil necromancer Wagnard.

The manga and its anime derivative Chronicles of the Heroic Knight continues the adventures of Parn for the first eight episodes, but then centers around Spark and his adventures to complete a quest tasked onto him to protect Neese, the daughter of Slayn and Leylia. He is accompanied by his own cast of friends in the form of Leaf, Garrack, Greevus, Aldo, and Ryna. The television series shares similarities with the plot of the OVA, such as Wagnard seeking to kidnap Neese in order to use her as a reagent for the resurrection of Naneel, a priestess and the Avatar of Kardis who was slain by Leylia's mother, the high priestess Neese a short time after the battle with the demonic god. Leylia was the reincarnation of Naneel, but when she lost her virginity she was no longer capable of being the doorway or reagent needed to unseal Naneel.

The third series, Legend of Crystania, places the former villain Ashram into the seat of a would-be hero who is placed under a spell by a "god beast" of Crystania. The series then centers around Pirotess, his dark elven lover, as she tries to find a way to free him from the clutches of the spell and to restore him back to his living self.

The following is a timeline of the events as they take place in the original events surrounding Record of Lodoss War, and is derived from the replays and manga. All events are measured on the "NRC" (New Royal Calendar) as used on the continent of Alecrast.

It has been confirmed via the Media Blasters Twitter page and several other sources that Central Park Media News reported that during a visit to the Media Blasters store, he was told that Media Blasters had rescued the Record of Lodoss War OVA and TV series and would be releasing them as one set[1] and that a Blu-Ray release was likely.

The Japanese online game company GameOn announced that it acquired the global license to make an online game for computers and mobile phones based on the Record of Lodoss War fantasy franchise from Kadokawa Production and Slowcurve. Ryo Mizuno, the novelist and co-creator of the franchise, will serve as a supervisor on the development of the online game. GameOn plans to release the game outside of Japan. GameOn also said that the new game will not be browser-based.[2] 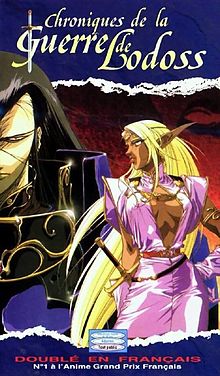