The Girl Who Leapt Through Time

The Girl Who Leapt Through Time

is the official international title adopted in 2006 for the release of a Japanese animated film which is an adaptation of a Japanese novel written by in 1965, soon become a youth classic story previously adapted many times in Japan under its original title "Toki o Kakeru Shōjo". A short TV series first aired in 1972 under the title "Time Traveler" starring Atsuko Shimada (aka Mayumi Asano), soon followed by a sequel, "Zoku Time Traveler". A live-action film starring was produced in 1983, with a popular theme song which has been covered several times. A TV film was produced in 1985 starring idol in her first leading role. A new TV series aired in 1994 starring . Another live-action film was produced in 1997 starring . In 2002, it was one of the three segments of the TV film "Shinshun! LOVE stories", starring then- idol . A series illustrated by was produced in 2004 in two volumes, and a second manga was produced in 2006 in one volume as a prologue to the animated film produced that year, a sequel to the original story.

;StoryKazuko Yoshiyama a third-year junior high school student is cleaning the school science lab with her classmates Kazuo Fukamachi and Gorō Asakura, when she smells a lavender-like scent and faints. After three days, strange events transpire around Kazuko, including the burning of Gorō's house after an earthquake. The next morning, at the exact moment of a car accident, Kazuko is transported 24 hours into the past.

She relives the day and relates her strange experience to Kazuo and Gorō. They don't believe her at first, but they are convinced when she accurately predicts the earthquake and ensuing fire. Fukushima, their science teacher, explains Kazuko's new ability is called "teleportation" and "time-leap", and to solve the riddle of her power she must leap back four days.

Finally, Kazuko's determination enables her to make the leap. Back in the science room she meets a mysterious man who has assumed her friend Kazuo's identity. He is really "Ken Sogoru", a time-traveler from AD 2660. His intersection with the girl's life is the accidental effect of a 'time-leaping' drug. Ken remains for a month and Kazuko falls in love with him. When he leaves, he erases all memories of himself from everyone he's met, including Kazuko. As the book ends Kazuko has the faint memory of somebody promising to meet her again every time she smells lavender.clear 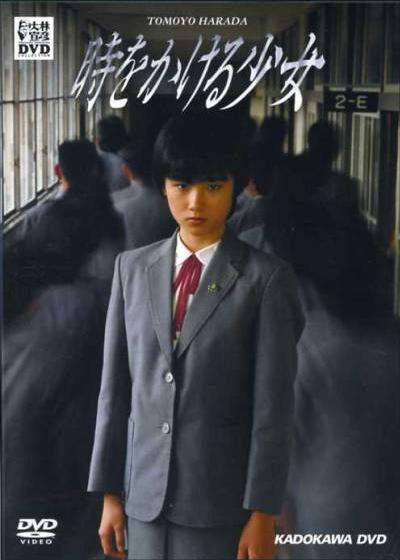 The Japanese film Nihongo|"Toki o Kakeru Shōjo"|時をかける少女 [citeweb|url= http://www.generalworks.com/databank/movie/title4/tokio.html|title=TokiKake 1983 film on the SF Movie Data Bank|language=Japanese] is a direct adaptation of the novel, released on July the 16th 1983 in Japan by Toei, directed by Nobuhiko Obayashi, with a screenplay by Wataru Kenmotsu, and starring idol in her first film. It's been since released internationally on DVD, with English sub-titles, under several unofficial English titles ("The Little Girl Who Conquered Time", "Girl Of Time", "The Girl Who Cut Time", among others).

;Matsutoya versions
, original author of the song, self-covered it the same year on the B-side of her single Nihongo|"Dandelion"|ダンデライオン and on her album "Voyager" in 1983. [citeweb|url= http://www.emimusic.jp/yuming/disco/15/index_j.htm|title=Yumi Matsutoya's "Voyager" album tracks list on EMI official site|language=Japanese] She later rewrote it and renamed it as Nihongo|"Toki no Canzone"|時のカンツォーネ|Toki no Kantsōne to be the theme song for the new 1997 "Toki o Kakeru Shōjo" film, along with another of her songs: "Nihongo|Yume no Naka de|夢の中で~We are not alone, forever~", both released on the original soundtrack album for the film (TOCT-9940) and on her album Nihongo|"Suyua no Nami"|スユアの波 in 1997. [citeweb|url= http://www.emimusic.jp/yuming/disco/29/index_j.htm|title=Yumi Matsutoya's "Suyua no Nami" album tracks list on EMI official site|language=Japanese]

;Other versionsThe original song was adapted in a commercial for noodles with then-beginning idol parodying the 1983 movie shortly after its release. Voice actress also covered the song as the B-side of her first single "Angel Fish" in 2003 (KICM-1077).clear

size = 200px
caption = 1997 film DVD cover ()
imdb_id = 0133235
writer =
starring =
director =
producer =
distributor =
released =
runtime =
language = Japanese
budget = A second Japanese film Nihongo|"Toki o Kakeru Shōjo"|時をかける少女 [citeweb|url= http://www.generalworks.com/databank/movie/title4/tok97.html|title=TokiKake 1997 film on the SF Movie Data Bank|language=Japanese] was released in Japan on , directed by , with a screenplay by Ryôji Itō, Chiho Katsura and Haruki Kadokawa, starring beginner in the main role. The film is narrated by the previous 1983 film's lead-actress , and is set in 1965, when the novel was published for the first time. The film poster was used as the new cover for the 1997 edition of the novel.

;Theme songs"Yume no Naka de ~We are not alone, forever~" and "Toki no Canzone", a remake of the 1983 film's theme song, written and sung by .clear

;First part:The first story of the film is "Izu no Odoriko", adapted from the 1926 novel "" by , and is starring band members along with and .

;Second part:The second story is "", adapted from the series by , and is starring band members along with , , , , and .

;Third part:The third story of the film is "Toki o Kakeru Shōjo", directed by Kazuhiro Onohara, screenplay by Toshio Terada, and is starring band members as Kazuko Yoshiyama, as her friend, as her sister, and actors and . clear

Infobox animanga/Header
name = The Girl Who Leapt Through Time

On , announced that the anime film will be released as a region 1 DVD in the United States for the first time. The scheduled release date will be . Bandai released it theatrically in on . [citeweb|url=http://www.rottentomatoes.com/m/girl_who_leapt_through_time/|title="The Girl Who Leapt Through Time" (2008)|publisher=|accessdate=2008-06-15]

's novel is used as the basis of the film, but it is not a direct adaptation. Instead, the film is set as a continuation of the book in the same setting some twenty years later. Tsutsui Yasutaka praised the film as being "a true second-generation" of his book at the on . [citeweb|url=http://plusd.itmedia.co.jp/games/articles/0606/20/news060.html|title=Tsutsui Yasutaka talks about "Toki o Kakeru Shōjo"|accessdate=2007-05-05|language=Japanese]

Makoto Konno (/), a girl attending high school in Tokyo's , realises she has the power to go back in time and re-do things (called a "time-leap") when she impossibly avoids a fatal accident at a train crossing one day.

Bewildered, she consults with her aunt (/) throughout the film, who then implies that she is the protagonist (Kazuko Yoshiyama) from the original novel. At first, Makoto uses her power extravagantly to avoid being tardy and to get perfect grades on tests, and even relive a single karaoke session for about ten hours. However, things begin to turn bad as she discovers how her actions can adversely affect others.

Makoto ends up using up more of her leaps to recklessly prevent undesirable situations from happening, including an awkward confession of love from her best friend Chiaki Mamiya (/). Eventually she discovers a numbered tattoo on her arm which counts down with each leap. She determines that the tattoo indicates that she can only leap through time a limited number of times. With only a few time leaps left, she attempts to make things right for everyone, but impulsively uses her final leap to prevent a phone call from Chiaki asking if she knows about time-leaping. As a result, she is unable to prevent her friend Kōsuke Tsuda (/) and his girlfriend from being killed in the accident at the train crossing that Makoto was originally involved in. Devastated, time suddenly stops.

Chiaki reveals that he is a traveller from the future and leapt through time in order to see a painting being restored by Makoto's aunt, as it has been destroyed in the future. While walking in the frozen city, Chiaki hints that his original era occurs after a world wide catastrophe decimates mankind. He then reveals that he has used his final leap to prevent Kōsuke's accident and has stopped time only to explain to Makoto what the consequences will be. By revealing his origins and the source of the item that allowed Makoto to leap through time, and being unable to return to his time period, Chiaki must disappear. Makoto realizes too late that she loves him as well.

True to his words, Chiaki disappears when time begins again and Makoto is upset. As she tries to come to terms with losing him, she discovers that Chiaki's time-leap had inadvertently restored one time-leap to her - Chiaki had leapt back to before Makoto used her last leap. Makoto uses her last leap to the exact time she gained her powers and at which point Chiaki still has one reamining team-leap. She reveals everything that he told her in the future concerning who he is, the ability to leap through time, and his reasons for extending his stay in her time frame. Shortly before returning to his time period, Chiaki says he will wait for her in the future and Makoto replies that she will run towards it.

"TokiKake" was released to a small number of theaters in Japan, taking in approximately 300 million yen (US$~3 million). [citeweb|url=http://www.animenewsnetwork.com/news/2007-02-20/tokikake-wins-animation-of-the-year-at-japanese-academy-awards-follow-up|title=Tokikake Wins "Animation of the Year" at Japanese Academy Awards: Follow Up|publisher=|accessdate=2007-05-05] The film wasn't advertised as frequently as other animation features from 2006 (such as "Tales from Earthsea"), but word of mouth and glowing reviews [citeweb|url=http://www.animenewsnetwork.com/news/2006-07-26/gedo-senki-panned-by-online-critics|title=Gedo Senki Panned by Online Critics|publisher=|accessdate=2007-05-05] generated interest. At Theatre Shinjuku for days in a row, filmgoers would fill the theater, some even standing to watch the film. Following this, distribution company Kadokawa Herald Pictures took unprecedented measures to increase the number of theaters showing the film across Japan, and sent the film to several international festivals.

"TokiKake", translated as "The Girl Who Leapt Through Time", premiered in Canada on at the and went onto premiere in US on at the 2007 New York International Children's Film Festival. The movie received a limited theatrical run in the USA, being shown subtitled in Los Angeles in June, and in Seattle in September. Also a dubbed version was shown in New York City in July. Its Boston area showings in August were subtitled. The film has also premiered in the UK as part of the Leeds Young People Film Festival on . More US showings are planned in other cities.

Even though it was not a massive hit at the box office, the film did exceptionally well at the various festivals it was entered in. "TokiKake" took home the Gertie Award for the best animated feature film at the thirty-ninth Sitges International Film Festival of Catalonia. [citeweb|url=http://www.animenewsnetwork.com/news/2006-10-23/toki-wo-kakeru-shoujo-wins-at-catalonia|title=Toki wo Kakeru Shōjo Wins at Catalonia|publisher=|accessdate=2007-05-05] It won the Animation Grand Award, given to the year's most entertaining animated film, at the prestigious sixty-first Annual . It was also awarded the first annual Animation of the Year prize at the thirtieth Japan Academy Prize. [citeweb|url=http://www.animenewsnetwork.com/news/2007-02-19/tokio-kakeru-syoujyo-wins-japan-academy-prize|title=Toki o Kakeru Syoujyo Wins Japan Academy Prize|publisher=|accessdate=2007-05-05] It was nominated for, but did not win, the twenty-seventh . [citeweb|url=http://comipress.com/news/2006/11/23/1057|title="Toki wo Kakeru Shōjo" Nominated for the twenty-seventh Japan SF Grand Prize|accessdate=2007-05-05] It received the Grand Prize in the animation division at the 2006 . [citeweb|url=http://plaza.bunka.go.jp/english/festival/sakuhin/sakuhin/anime01.html|title="Toki wo Kakeru Shōjo" Japan Media Arts Plaza in 2006|accessdate=2007-05-05] At the sixth annual , which opened on , "TokiKake" was recognized as "Animation of the Year" and won several awards. [citeweb|url=http://www.animenewsnetwork.com/news/2007-03-19/results-anime-awards|title=Results of sixth Annual Tokyo Anime Awards Announced|publisher=|accessdate=2007-05-05] It won the Special Distinction for Feature Film at France's thirty-first on . It played to full-house theatres during a screening in August 2007 at the ninth Cinemanila International Film Festival in .