Fungiculture is the process of producing food, medicine, and other products by the cultivation of mushrooms and other fungi.

The word is also commonly used to refer to the practice of cultivating fungi by leafcutter ants, termites, ambrosia beetles, and marsh periwinkles.

Mushrooms are not plants, and require different conditions for optimal growth. Plants develop through photosynthesis, a process that converts atmospheric carbon dioxide into carbohydrates, especially cellulose. While sunlight provides an energy source for plants, mushrooms derive all of their energy and growth materials from their growth medium, through biochemical decomposition processes. This does not mean that light is an unnecessary requirement, since some fungi use light as a signal for fruiting.[1][2] However, all the materials for growth must already be present in the growth medium. Mushrooms grow well at relative humidity levels of around 95-100%, and substrate moisture levels of 50 to 75%.[1]

Instead of seeds, mushrooms reproduce sexually during underground growth, and asexually through spores. Either of these can be contaminated with airborne microorganisms, which will interfere with mushroom growth and prevent a healthy crop.

Mycelium, or actively growing mushroom culture, is placed on growth substrate to seed or introduce mushrooms to grow on a substrate. This is also known as inoculation, spawning or adding spawn. Its main advantages are to reduce chances of contamination while giving mushrooms a firm beginning. Spores are another inoculation option, but are less developed than established mycelium. Since they are also contaminated easily, they are only manipulated in laboratory conditions with laminar flow cabinet.

Due to its climate, the Pacific Northwest of the USA produces commercially valuable mushrooms. Valued species include:[3][4]

Mushroom gatherers have the fewest requirements to begin business. Gatherers only need to supply funds for possible park fees, knowledge for identifying mushrooms and gathering time.

There are significant disadvantages to relying on natural mushroom production. These sales may be unregulated, placing buyers at risk for buying toxic or inedible mushrooms. By honest error, harvests may include toxic or inedible species. No controls exist to regulate the quality or frequency of harvests, since gatherers rely on favorable natural conditions and weather to produce fruiting. Conflicts may arise between competing gatherers trying to harvest from the same location.

State parks in the Pacific Northwest or elsewhere may charge fees for mushroom gathering permits.[5][6] Appalachia also produces edible wild mushrooms, including chanterelles and morels.[7] Pickers may sell directly to distributors, restaurants, or sell their harvest through roadside stands wherever a natural supply of mushrooms is plentiful.

Harvesting wild mushrooms removes only fruiting bodies and their attached spores. However, the fruiting bodies (mushrooms) have likely dropped spores before harvest time, or will likely drop them en route to the harvester's destination, further expanding the fungi's habitat. Arguably, the practice of mushroom harvesting may actually help the species being harvested. While truffles also represent the fruiting body of a larger underground network, they are an exception, since they rely on animal spore dispersion.

Mushrooms can be grown on logs placed outdoors in stacks or piles, as has been done for hundreds of years.[8] Sterilization is not performed in this method. Since production may be unpredictable and seasonal, less than 5% of commercially sold mushrooms are produced this way.[9] Here, tree logs are inoculated with spawn, then allowed to grow as they would in wild conditions. Fruiting, or pinning, is triggered by seasonal changes, or by briefly soaking the logs in cool water.[8] Shiitake and oyster mushrooms have traditionally been produced using the outdoor log technique, although controlled techniques such as indoor tray growing or artificial logs made of compressed substrate have been substituted.[9][10][11]

According to Daniel Royse and Robert Beelman, "[Indoor] Mushroom farming consists of six steps, and although the divisions are somewhat arbitrary, these steps identify what is needed to form a production system. The six steps are phase I composting, phase II fertilizing, spawning, casing, pinning, and cropping."[13][14]

Complete sterilization is not always required or performed during composting. In some cases, a pasteurization step is not included to allow some beneficial microorganisms to remain in the growth substrate.[13]

Specific time spans and temperatures required during stages 3–6 will vary respective to species and variety. Substrate composition and the geometry of growth substrate will also affect the ideal times and temperatures.

Pinning is the trickiest part for a mushroom grower, since a combination of carbon dioxide (CO2) concentration, temperature, light, and humidity triggers mushrooms towards fruiting.[1][2][13] Up until the point when rhizomorphs or mushroom "pins" appear, the mycelium is an amorphous mass spread throughout the growth substrate, unrecognizable as a mushroom.

Carbon dioxide concentration becomes elevated during the vegetative growth phase, when mycelium is sealed in a gas-resistant plastic barrier or bag which traps gases produced by the growing mycelium. To induce pinning, this barrier is opened or ruptured. CO2 concentration then decreases from about 0.08% to 0.04%, the ambient atmospheric level.[13]

Mushrooms metabolize complex carbohydrates in their substrate into glucose, which is then transported through the mycelium as needed for growth and energy. While it is used as a main energy source, its concentration in the growth medium should not exceed 2%. For ideal fruiting, closer to 1% is ideal.[1]

Parasitic insects, bacteria and other fungi all pose risks to indoor production. The sciarid fly or phorid fly may lay eggs in growth medium, which hatch into worms and damage developing mushrooms during all growth stages. Bacterial blotch caused by Pseudomonas bacteria or patches of Trichoderma green mold also pose a risks during the fruiting stage. Pesticides and sanitizing agents are available to use against these infestations.[12][18] Biological controls for insect sciarid and phorid flies have also been proposed.[19]

A recent epidemic of Trichoderma green mold has significantly affected mushroom production: "From 1994-96, crop losses in Pennsylvania ranged from 30 to 100%".[20] 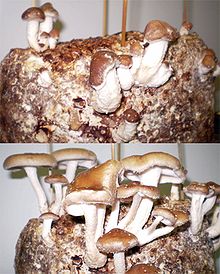 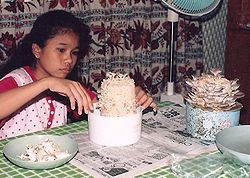 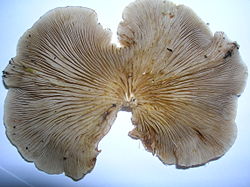 Details of the gill structure of the edible oyster mushroom Pleurotus ostreatus.[21]

Production regions in the United States

Pennsylvania is the top-producing mushroom state in the United States, and celebrates September as "Mushroom Month".[22]

The borough of Kennett Square is a historical and present leader in mushroom production. It currently leads production of Agaricus-type mushrooms,[23] followed by California, Florida and Michigan.[24]

Vancouver, British Columbia, also has a significant number of producers — about 60 as of 1998 — mostly located in the lower Fraser Valley.[26]