Plasmodium vivax is a protozoal parasite and a human pathogen. The most frequent and widely distributed cause of recurring (tertian) malaria, P. vivax is one of the four species of malarial parasite that commonly infect humans. It is less virulent than Plasmodium falciparum, which is the deadliest of the four, and is seldom fatal. P. vivax is carried by the female Anopheles mosquito, since it is the only sex of the species that bites.

P. vivax is found mainly in the United States, Latin America, and in some parts of Africa. P. vivax can cause death due to splenomegaly (a pathologically enlarged spleen), but more often it causes debilitating – but non-fatal – symptoms.[1][2] Overall it accounts for 65% of malaria cases in Asia and South America.

When chloroquine resistance is common or when chloroquine is contraindicated, then artesunate is the drug of choice, except in the U.S., where it is not approved for use.[5] Where an artemisinin-based combination therapy has been adopted as the first-line treatment for P. falciparum malaria, it may also be used for P. vivax malaria in combination with primaquine for radical cure.[3] An exception is artesunate plus sulfadoxine-pyrimethamine (AS+SP), which is not effective against P. vivax in many places.[3] Mefloquine is a good alternative and in some countries is more readily available.[6] Atovaquone-proguanil is an effective alternative in patients unable to tolerate chloroquine.[7] Quinine may be used to treat vivax malaria but is associated with inferior outcomes.

Thirty-two to 100% of patients will relapse following successful treatment of P. vivax infection if a radical cure (eradication of liver stages) is not given.[8][9][10] Eradication of the liver stages is achieved by giving primaquine, after checking the patients G6PD status to reduce the risk of haemolysis.[11] However, in severe G6PD deficiency, primaquine is contraindicated and should not be used.[3] Recently, this point has taken particular importance for the increased incidence of vivax malaria among travelers.[12] At least a 14-day course of primaquine is required for the radical treatment of P. vivax.[3]

P. vivax is the only indigenous malaria parasite on the Korean peninsula. In the years following the Korean War (1950–53), malaria-eradication campaigns successfully reduced the number of new cases of the disease in North Korea and South Korea. In 1979, World Health Organization declared the Korean peninsula vivax malaria-free, but the disease unexpectedly re-emerged in the late 1990s and still persists today. Several factors contributed to the re-emergence of the disease, including reduced emphasis on malaria control after 1979, floods and famine in North Korea, emergence of drug resistance and possibly global warming. Most cases are identified along the Korean Demilitarized Zone. As such, vivax malaria offers the two Koreas a unique opportunity to work together on an important health problem that affects both countries.[13][14]

P. vivax can reproduce both asexually and sexually, depending on its life cycle stage.

Sexual forms: Gametocytes: Round. The gametocytes of P. vivax are commonly found in the peripheral blood at about the end of the first week of parasitemia.

It has been suggested that P. vivax has horizontally acquired genetic material from humans. [15]

The incubation period for the infection usually ranges from ten to seventeen days and sometimes up to a year. Persistent liver stages allow relapse up to five years after elimination of red blood cell stages and clinical cure.

The infection of Plasmodium vivax takes place in human when an infected female anopheles mosquito sucks blood from a healthy person. During feeding, the mosquito injects saliva to prevent blood clotting and, along with the saliva, thousands of sporozoites are inoculated into human blood; within a half-hour the sporozoites reach the liver. There they enter hepatic cells, transform into the tropozoite form and feed on hepatic cells, and reproduce asexually. This process gives rise to thousands of merozoites (plasmodium daughter cells) in the circulatory system and the liver.

The P. vivax sporozoite enters a hepatocyte and begins its exoerythrocytic schizogony stage. This is characterized by multiple rounds of nuclear division without cellular segmentation. After a certain number of nuclear divisions, the parasite cell will segment and merozoites are formed.

There are situations where some of the sporozoites do not immediately start to grow and divide after entering the hepatocyte, but remain in a dormant, hypnozoite stage for weeks or months. The duration of latency is variable from one hypnozoite to another and the factors that will eventually trigger growth are not known; this explains how a single infection can be responsible for a series of waves of parasitaemia or "relapses".[16] Different strains of P. vivax have their own characteristic relapse pattern and timing.[17] The earlier stage is exo-erythrocytic generation. 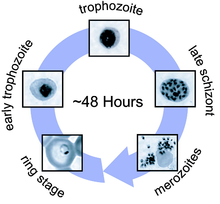 P. vivax preferentially penetrates young red blood cells (reticulocytes). In order to achieve this, merozoites have two proteins at their apical pole (PvRBP-1 and PvRBP-2). The parasite uses the Duffy blood group antigens (Fy6) to penetrate red blood cells. This antigen does not occur in the majority of humans in West Africa [phenotype Fy (a-b-)]. As a result P. vivax occurs less frequently in West Africa.[19]

The parasitised red blood cell is up to twice as large as a normal red cell and Schüffner's dots (also known as Schüffner's stippling or Schüffner's granules) is seen on the infected cell's surface, the spotted appearance of which varies in color from light pink, to red, to red-yellow, as coloured with Romanovsky stains. The parasite within it is often wildly irregular in shape (described as "amoeboid"). Schizonts of P. vivax have up to twenty merozoites within them. It is rare to see cells with more than one parasite within them. Merozoites will only attach to immature blood cell (reticulocytes) and therefore it is unusual to see more than 3% of all circulating erythrocytes parasitised.

the life cycle in mosquitoes include:

Development of gametes from gametocytes is known as gametogony. When a female Anopheles mosquito bites an infected person, gametocytes and other stages of the parasite are transferred to the stomach where further development occur.

The microgametocytes becomes very active and its nucleus undergoes fission to give 6-8 daughter nuclei which becomes arranged at the periphery. The cytoplasm develops long thin flagella like projections, then a nucleus enter into each one of these extensions. These cytoplasmic extensions later break off as mature male gametes (microgametes). This process of formation of flagella like microgametes or male gametes is known as exflagellation. Macrogametocytes show very little change. It develops a cone of reception at one side and becomes mature as female gamete / macrogameto cytes.

Male gametes move actively in the stomach of mosquito in search of female gamete. Male gamete then enters into female gamete through the cone of reception and the complete fusion of 2 gametes result in the formation of zygote. (synkaryon). Process of fusion of male and female gamete is called as syngamy. Fusion of 2 dissimilar gametes is known as anisogamy. The zygote remains inactive for sometime but it soon elongates, becomes vermiform (worm-like) and motile. It is now known as ookinete. The pointed ends of ookinete penetrate the wall of stomach and comes to lie below its outer epithelial layer. Here it becomes spherical and develops a cyst wall around itself. The cyst wall is derived partly from the stomach tissues and partly produced by the zygote itself. At this stage, it is known as the oocyst. The oocyst absorbs nourishment and grow in size. These oocyst protrude (bulge) from the surface of stomach giving it a kind of blistered appearance. In a highly infected mosquito, as many as 1000 oocyst may be seen.

The nucleus of oocyst divides repeatedly to form large number of daughter nuclei. At the same time, the cytoplasm develops large vacuoles and forms numerous cytoplasmic masses. These cytoplasmic masses then elongate and a daughter nuclei migrates into each one of them. The resulting sickle-shaped bodies is known as sporozoites. This phase of asexual multiplication is known as sporogony and is completed in about 10-21 days. The oocyst then burst and sporozoites are relaesed into the body cavity of mosquito from where they eventually reach the salivary glands of mosquito through blood. The mosquito now becomes infectiv . Salivary glands of a single infected mosquito may contain as many as 200,000 sporozoites. When the mosquito bites a healthy person, thousands of sporozoites are infected into the blood along with the saliva and the cycle starts again.

P. vivax and P. ovale that has been sitting in EDTA for more than half-an-hour before the blood film is made will look very similar in appearance to P. malariae, which is an important reason to warn the laboratory immediately when the blood sample is drawn so they can process the sample as soon as it arrives. Blood films are preferably made within half-an-hour of the blood being drawn and must certainly be made within an hour of the blood being drawn. Diagnosis can be done with the strip fast test of antibodies,

At present both types of P. vivax circulate in the Americas. The monkey parasite - Plasmodium simium - is related to the Old World strains rather than to the New World strains.

A specific name - Plasmodium collinsi - has been proposed for the New World strains but this suggestion has not been accepted to date.