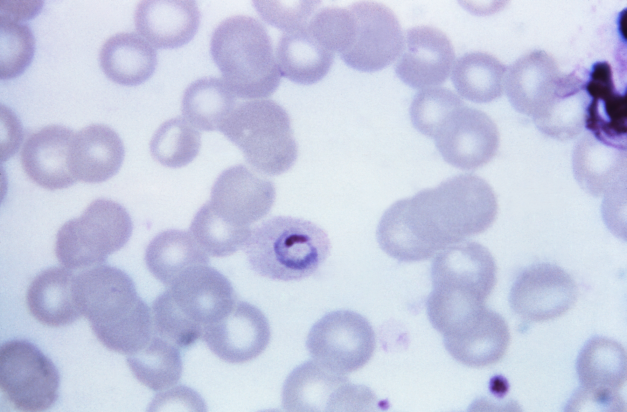 "Plasmodium ovale" is a species of parasitic that causes tertian in humans. It is closely related to "" and "", which are responsible for most malaria. It is rare compared to these two parasites, and substantially less dangerous than "P. falciparum".

The microscopic appearance of "P. ovale" is very similar to that of "P. vivax" and if there are only a small number of parasites seen, it may be impossible to distinguish the two species on morphological grounds alone. There is no difference between the medical treatment of "P. ovale" and "P. vivax", and therefore some laboratory diagnoses report "P. vivax/ovale", which is perfectly acceptable as treatment for the two are very similar. are seen on the surface of the parasitised , but these are larger and darker than in "P. vivax" and are sometimes called "James's dots". About twenty percent of the parasitized cells are oval in shape (hence the species name) and some of the oval cells also have fimbriated edges (the so-called "comet cell"). The mature of "P. ovale" never have more than twelve nuclei within them and this is the only reliable way of distinguishing between the two species.

"P. vivax" and "P. ovale" that has been sitting in for more than half-an-hour before the blood film is made will look very similar in appearance to "P. malariae", which is an important reason to warn the laboratory immediately when the blood sample is drawn so they can process the sample as soon as it arrives.

Standard treatment is concurrent treatment with and . The combination may be used in those patients who are unable to take for whatever reason. [cite journal|journal=Trans R Soc Trop Med Hyg|year=1996|volume=90|issue=6|pages=682|title=Atovaquone plus proguanil is an effective treatment for "Plasmodium ovale" and "P. malariae malaria"|author=Radloff PD, Philipps J, Hutchinson D, Kremsner PG|pmid=9015517|doi=10.1016/S0035-9203(96)90435-6]

The "P. ovale" sporozoite enters a hepatocyte and begins its exoerythrocytic schizogony stage. This is characterized by multiple rounds of nuclear division without cellular segmentation. After a certain number of nuclear divisions, the parasite cell will segment and are formed.

There are situations where some of the sporozoites do not immediately start to grow and divide after entering the hepatocyte, but remain in a dormant, stage for weeks or months. The duration of latency is variable from one hypnozoite to another and the factors that will eventually trigger growth are not known; this explains how a single infection can be responsible for a series of waves of parasitaemia or "relapses".

While similar to "P. vivax", "P. ovale" is able to infect individuals who are negative for the Duffy blood group, which is the case for many residents of sub Saharan Africa. This explains the greater prevalence of "P. ovale" (rather than "P. vivax") in most of Africa.