Bonfire
For other uses, see Bonfire (disambiguation).
Not to be confused with campfire.

A bonfire burns during a night event

A bonfire is a controlled outdoor fire used for informal disposal of burnable waste material or as part of a celebration. Celebratory bonfires are typically designed to burn quickly and may be very large. The name 'bonfire' is believed to be derived from the Celtic custom of burning the bones of the cattle which were slaughtered at this time of year - a 'bone fire'.

In many regions of continental Europe, bonfires are made traditionally on January 16[citation needed], the solemnity of John the Baptist, as well as on Saturday night before Easter.[citation needed] Bonfires are also a feature of Walpurgis Night in central and northern Europe, and the celebrations on the eve of St. John's Day in Spain.

Bonfire traditions of early spring, known as in German, lit on the Sunday following Ash Wednesday (Funkensonntag), are widespread throughout the Alemannic German speaking regions of Europe and in parts of France. The burning of "winter in effigy" at the Sechseläuten in Zürich (introduced in 1902) is inspired by this Alemannic tradition. In Austria "Osterfeuer" Easter Fire are widely usual, but also regulated in cities, districts and countries to hold down the effected annual high of PM10-dust immission; besides there are "Sonnwendfeuer" on the evening of 21. June.

Since 1988 "Feuer in den Alpen" (Fire in the Alps) are lit on a day in August on mountains to be seen from far and to appeal to sustainable development of the mountain region.[1]

In India, particularly in Punjab, people gather around a bonfire and eat peanuts and sweets during the festival of Lohri to commemorate the winning of good over evil. Families who have a new-born son usually build a bonfire outside their house as part of this celebration. The festival falls in the second week of January every year. In Assam in the northeastern part of India, a harvest festival called Bhogali Bihu is celebrated to mark the end of harvest season in mid-January. In southern parts of India, particularly in Andhra Pradesh, Tamil Nadu and Mumbai, the Bhogi festival is celebrated on the last day of the of 'Maarkali' which is also the first day of the farmer festival Pongal. People collect unwanted items from their houses and set it on fire in a bonfire to celebrate. During the ten days of Vijayadashami, Deities of Ravana, his brother Kumbhakarna and son Meghanad are erected and burnt by enthusiastic youths at sunset.Traditionally a bonfire on the day of Holi, marks the symbolic annihilation of Holika the demoness as described above.[2] 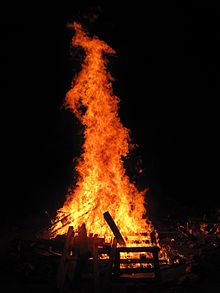 In Israel, on the eve of Lag BaOmer, bonfires are lit on to commemorate the Mishnaic sage Rabbi Shimon Bar Yochai who according to tradition died on Lag BaOmer. Rabbi Shimon Bar Yochai is accredited with having composed the Kabalistic work The Zohar (literally "The Shining" - hence the custom of lighting fire to commemorate him). The main celebration takes place at Rabbi Shimon's tomb on Mt. Meron in northern Israel, but all over the country bonfires are lit in open spaces. Linked by Modern Jewish tradition to the Bar Kokhba Revolt against the Roman Empire (132-135 CE), Lag BaOmer is very popularly observed and celebrated as a symbol for the fighting Jewish spirit. As Lag Ba'Omer draws near, children begin collecting material for the bonfire: wood boards and planks, old doors, and anything else made of wood. Building contractors employ extra night watchmen at their building sites to prevent eager youngsters from taking building materials.[4]. On the night itself, families and friends gather round the fires and youths will burn their bonfires till daybreak.

In Northern Italy, the celebration Panevin (in English "bread and wine") or Foghera or Pignarul is held on the Epiphany (6 January). A straw witch dressed with old clothes, is placed on a bonfire and burned to ash. The witch symbolizes the past and the direction of the smoke indicates whether the new year is going to be good or bad.

Every August 16, the ancient city of Kyoto holds the Gozan no Okuribi, a Buddhist, bonfire based spectacle, which marks the end of the *O-Bon season.

In Iceland, bonfires are traditional on New Year's Eve, and on January 6, which is the last day of the Icelandic Christmas season.[citation needed] In Norway and Denmark[citation needed], large bonfires are lit on June 23 to celebrate "Jonsok" or "St Hansaften" the evening before John the baptist's birthday. As many other traditions in Scandinavia, St. Hans is believed to have a pagan origin, the celebration of mid summer's eve. In Sweden Walpurgis Night is celebrated on April 30 which includes the burning of a bonfire. In Finland, Midsummer Eve is celebrated with large bonfires.[5]

In Serbia, bonfires are traditionally lit on the evening before May 1, commemorating Labour Day.[citation needed]

In the Czech Republic and Slovakia, bonfires are also held on the last night of April, called 'Phillip-Jakob's Night'. This event is called "Burning of the Witches".[citation needed]

In Russia, bonfires are traditionally burned on November 17.[citation needed]

In Poland, bonfires are traditionally and still enthusiastic burned during St. John Night or Noc Kupały on June 23/24.

In some Slavic countries a bonfire is referred to as a "bond fire" because of the bond developed between friends around the fire.

In Turkey bonfires lit on Hidirellez Day believed to be the awakening day of nature at the beginning of spring. Celebrated on 5th of May.

A bonfire at Dartmouth College

In Great Britain and some Commonwealth countries, bonfires are lit on Guy Fawkes Night[6] a yearly celebration held on the evening of 5 November to mark the failure of the Gunpowder Plot of 5 November 1605, in which a number of Catholic conspirators, including Guy Fawkes, attempted to destroy the House of Lords in London.

In Northern Ireland, bonfires are lit on Halloween, October 31.[7]

Each 11 July in Northern Ireland, bonfires are lit by many Protestant communities to celebrate the victory of Williamite forces at the Battle of the Boyne,[8] which took place on 12 July 1690. This is often called the "Eleventh night".

In New England, on the night before the Fourth of July, towns competed to build towering pyramids, assembled from hogsheads and barrels and casks. They were lit at nightfall, to usher in the celebration. The highest were in Salem, Massachusetts, composed of as many as forty tiers of barrels; these are the tallest bonfires ever recorded. The practice flourished in the nineteenth and twentieth centuries, and can still be found in some New England towns.[9]

On Christmas Eve in Southern Louisiana, bonfires are built along the Mississippi River levees to light the way for Papa Noël as he moves along the river in his pirogue (Cajun canoe) pulled by eight alligators. This tradition is an annual event in St. James Parish, Louisiana.[10]

In the United Kingdom, bonfires are used in large gardens and allotments to dispose of waste plant material that is not readily composted.[citation needed] This includes woody material, pernicious weeds, diseased material and material treated with persistent pesticides and herbicides. Such garden bonfires may be quite small but are often designed to burn slowly for several days so that wet and green material may be reduced to ash by frequently turning the unburnt material into the centre. Such bonfires can also deal with turf and other earthy material. The ash from garden bonfires is a useful source of potash and may be beneficial in improving the soil structure of some soils although such fires must be managed with safety in mind.[11] Garden and farm bonfires are frequently persistently smoky and can cause local nuisance if poorly managed or lit in unsuitable weather conditions.[12]