Monte Carlo is widely known for its casino and its prominence. The permanent population is about 15,000 in Quarter. Monte Carlo quarter includes not only Monte Carlo proper where the Le Grand Casino is located, it also includes the neighbourhoods of Saint-Michel, Saint-Roman/Tenao, and the beach community of Larvotto. It is also one of Monaco's 10 wards, with a population of 3,500. It borders the French town of Beausoleil (sometimes referred to as Monte-Carlo-Supérieur).

The "Monte Carlo" name is of Italian origin, meaning the "Mount of Charles" named after the Prince Charles III of Monaco during the time of his reign.

Founded in 1866, Monte Carlo has a name of Italian origin meaning "Mount Charles", in honor of the then-reigning prince, Charles III of Monaco. The specific mountain is the escarpment at the foot of the Maritime Alps on which the town stands.

Charles III of Monaco who was responsible for turning the Monte Carlo district and Monaco into a thriving town
Main article: History of Monaco

The history of the area and the ruling Grimaldi family, however, dates back centuries. The port of Monaco is first mentioned in historical records as early as 43 BC, when Julius Caesar concentrated his fleet there while waiting in vain for Pompey. In the 12th century, the area fell under the sovereignty of Genoa, which was granted the entire coastline from Porto Venere to Monaco. After much conflict, the Grimaldis regained the rock in 1295, but suffered a significant amount of opposition in the ensuing years. In 1506 the Monegasques, under Lucien, Lord of Monaco, were under siege for some four months by the Genoan army, which had ten times the number of men. Monaco officially received full autonomy in 1524, but experienced difficulty retaining power, and on occasions briefly fell under the domination of Spain, Sardinia, and France.

By the 1850s, Monaco’s reigning family was almost bankrupt; this was a result of the loss of two towns, Menton and Roquebrune, which had provided most of the principality’s revenues with their lemon, orange and olive crops.[2] At the time, a number of small towns in Europe were growing prosperous from the establishment of casinos, notably in German towns such as Baden-Baden and Homburg[disambiguation needed

]. In 1856, Charles III of Monaco granted a concession to Napoleon Langlois and Albert Aubert to establish a sea-bathing facility for the treatment of various diseases, and to build a German-style casino in Monaco.[2] The initial casino was opened in La Condamine in 1862, but was not a success; its present location in the area called "Les Spelugues" (The Caves) of Monte Carlo, came only after several relocations in the years that followed. The success of the casino grew slowly, largely due to the area's inaccessibility from much of Europe. The installation of the railway in 1868, however, brought with it an influx of people into Monte Carlo and saw it grow in wealth.[2]

In 1911, when the Constitution divided the principality of Monaco in 3 municipalities, the municipality of Monte Carlo was created covering the existing neighborhoods of La Rousse / Saint Roman, Larvotto / Bas Moulins and Saint Michel. The municipalities were merged into one in 1917, after accusations that the government was acting according to the motto "divide and conquer" and they were accorded the status of wards (quartiers) thereafter. Today, Monaco is divided into 10 wards, with an eleventh ward planned (but currently postponed) to encompass land reclaimed from the sea (see the "Administrative Divisions" section of Monaco for additional details).

The quarter of Monte Carlo was served by tramways from 1900 to 1953, linking all parts of Monaco (see transportation in Monaco). In 2003, a new cruise ship pier was completed in the harbour at Monte Carlo. 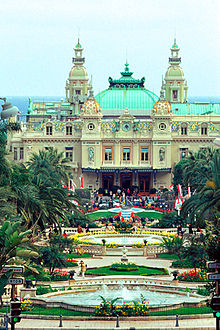 Monte Carlo is host to most of the Circuit de Monaco, on which the Formula One Monaco Grand Prix takes place. It also hosts world championship boxing bouts, the European Poker Tour Grand Final and the World Backgammon Championship as well as fashion shows and other events. Although the Monte Carlo Masters tennis tournament is billed as taking place in the community, its actual location is in the adjacent French commune of Roquebrune-Cap-Martin. Monte Carlo has been visited by royalty as well as the general public and movie stars for decades. The Monte Carlo Rally is one of the longest running and most respected car rallies; from 1973 to 2008, it marked the start of each rally season as the first event on the World Rally Championship calendar, but is now part of the second-tier Intercontinental Rally Challenge. However, the rally takes place outside the Monte Carlo quarter.

Monte Carlo is one of Europe's leading tourist resorts, although many of the key tourist destinations are located in other parts of Monaco, including such attractions as Monaco Cathedral, the Napoleon Museum, the Oceanographic Museum and aquarium, and the Prince's Palace, all of which are located in Monaco-Ville.

The Opéra de Monte-Carlo or Salle Garnier was built by the architect Charles Garnier as an exact replica in miniature of the Paris Opera House. The auditorium of the opera house is decorated in red and gold and has frescoes and sculptures all around the auditorium. It was inaugurated on January 25, 1879 with a performance by Sarah Bernhardt dressed as a nymph. The first opera performed there was Robert Planquette's Le Chevalier Gaston on 8 February 1879, and that was followed by three more in the first season.

With the influence of the first director, Jules Cohen (who was instrumental in bringing Adelina Patti) and the fortunate combination of Raoul Gunsbourg, the new director from 1883, and Princess Alice, the opera-loving American wife of Charles III's successor, Albert I, the company was thrust onto the world's opera community stage. Gunsbourg remained for sixty years overseeing such premiere productions as Berlioz's La damnation de Faust in 1893 and the first appearances in January 1894 of the heroic Italian tenor, Francesco Tamagno in Verdi's Otello, the title role of which he had created for the opera's premiere in Italy.

By the early years of the twentieth century, the Salle Garnier was to see such great performers as Nellie Melba and Enrico Caruso in La Bohème and Rigoletto (in 1902), and Feodor Chaliapin in the premiere of Jules Massenet's Don Quichotte (1910). This production formed part of a long association between the company and Massenet and his operas, two of which were presented there posthumously.

Apart from Massenet, composers whose works had their first performances at Monte Carlo included: Saint-Saëns (Hélène, 1904); Mascagni (Amica, 1905); and Puccini (La rondine, 1917). Indeed, since its inauguration, the theatre has hosted 45 world premiere productions of operas. René Blum was retained to found the Ballet de l'Opéra. The "Golden Age" of the Salle Garnier is gone, as small companies with small houses are not able to mount productions that cost astronomical sums. Nonetheless, the present day company still presents a season containing five or six operas. 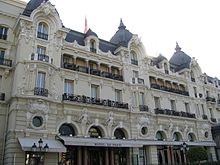 The Hôtel de Paris was established in 1864 by Charles III of Monaco adjacent to the casino. It is a hotel in the heart of Monte Carlo. It belongs to the Société des bains de mer de Monaco (SBM), and is part of the elite Palace Grand Hotels in Monaco with the Hotel Hermitage, the Monte-Carlo Beach Hotel on Monte-Carlo Bay Hotel & Resort, the Metropole Hotel and Fairmont hotel.

Additionally there are 74 suites and junior suites which are grouped similarly, offering more luxury than the rooms. There are Single and Double suites as well as Courtyard Junior suites and Sea/Casino Junior suites.[5] There is also one Presidential suite.[6]

Monte Carlo has featured in numerous films and television series. Most recently in the 2011 movie of the same name

The 1968 Princess Grace of Monaco documentary Monte Carlo: C'est La Rose starring Grace Kelly, Prince Rainier of Monaco, a musical cast of international celebrities and David Winters dancers was designed to show off the beauty and the wonders of Monte Carlo to the world.[7] The Stephen Flaherty/Lynn Ahrens musical Lucky Stiff takes place in Monte Carlo. The 1930 American film Monte Carlo starring Jack Buchanan and Jeanette MacDonald was set in Monte Carlo. The casino featured in the James Bond films Never Say Never Again (1983), GoldenEye (1995), and Casino Royale (2006). To Catch a Thief (1954) was an Alfred Hitchcock film with Monte Carlo and its famous casino as the setting and featured Cary Grant and the future Princess Grace of Monaco as the stars. There is a scene in the movie where the-then Grace Kelly drives a car very quickly - and dangerously - along the steep winding roads of Monaco that surround the heights of Monte Carlo; an interesting coincidence to her actual fate in 1982. Monte Carlo was even a location for the late 1960s British London based series Randall and Hopkirk (Deceased) where in the eleventh episode of the series, "The Ghost who Saved the Bank at Monte Carlo", Mike Pratt, Kenneth Cope and Annette Andre went to Monte Carlo to accompany a highly talented elderly woman to gamble inside the casino and waylay a group of thugs (amongst them Brian Blessed). In 1970, Chevrolet introduced a car called the Chevrolet Monte Carlo which went through six generations of production until 2007. The motor race Monaco World Prix 1 in Monte Carlo also featured in the 2010 film Iron Man 2. Other films such as I Spy and Monte Carlo use the city as a setting. The video game series Gran Turismo often features Monte Carlo as a location.

Panorama of La Condamine and Monte Carlo from the lookout near the Prince's Palace of Monaco in Monaco-Ville.