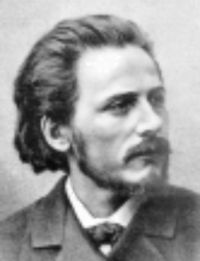 Jules Émile Frédéric Massenet (French pronunciation: [ʒyl emil fʁedeʁik masnɛ]) (May 12, 1842 – August 13, 1912) was a French composer best known for his operas. His compositions were very popular in the late 19th and early 20th centuries, and he ranks as one of the greatest melodists of his era. Soon after his death, Massenet's style went out of fashion, and many of his operas fell into almost total oblivion. Apart from Manon and Werther, his works were rarely performed. However, since the mid-1970s, many operas of his such as Thaïs and Esclarmonde have undergone periodic revivals.

Massenet was born in Montaud, then an outlying hamlet and now a part of the city of Saint-Étienne, in the Loire. When he was six, his family moved to Paris due to his father's ill-health. There his mother (Adélaïde Massenet, née Royer; her husband's second wife) started taking piano pupils. She also taught Jules so well that at the age of 11 he was able to enter the Paris Conservatoire. He was still a student when his family moved from Paris to Chambéry, but Jules returned to Paris after a few months, living with a married member of his father's family by his first wife. To support himself during his studies, he worked as timpanist for six years at the Théâtre Lyrique, playing also other percussion instruments in other theatres, and working as a pianist in the Café de Belleville.

Although at first some of his teachers had not predicted for him any career in music, this changed in 1862 when he won the Grand Prix de Rome with his cantata David Rizzio and spent three years in Rome. There he met Franz Liszt, at whose request he gave piano lessons to Louise-Constance "Ninon" de Gressy, the daughter of a wealthy lady named Mme Sainte-Marie. Ninon became Massenet's wife in 1866. 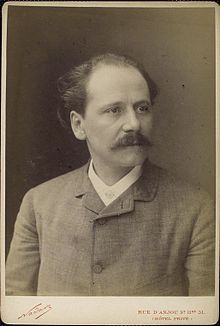 Massenet early in his career.

His first opera, La grand' tante, was a one-act production at the Opéra-Comique in 1867. Nevertheless it was his dramatic oratorio Marie-Magdeleine (first performed in 1873) that won him praise from the likes of Tchaikovsky, d'Indy (who afterwards turned against him), and Gounod. His real mentor, though, was the composer Ambroise Thomas, a man with important contacts in theatrical milieux. Another important early patron was his publisher, Georges Hartmann, whose connections with journalistic circles aided him in becoming better known during the difficult initial years of his composing activity. Even Massenet's marriage to Ninon helped him a great deal in securing commissions and garnering fame in important social circles.

Massenet took a break from his composing to serve as a soldier in the Franco-Prussian War, but returned to his art following the end of the conflict in 1871. From 1878 he worked as professor of composition at the Paris Conservatory where his pupils included André Bloch, Gustave Charpentier, Ernest Chausson, Reynaldo Hahn, Georges Enesco, and Charles Koechlin. His greatest successes were Manon in 1884, Werther in 1892, and Thaïs in 1894. Notable later operas were Le jongleur de Notre-Dame, produced in 1902, and Don Quichotte, produced in Monte Carlo 1910, with the legendary Russian bass Feodor Chaliapin in the title-role.

In 1876 he received the Légion d'honneur, and was appointed a Grand Officer in 1899. In 1878 he was elected a member of the Académie des Beaux-Arts, to the exclusion of Camille Saint-Saëns. He was only 36, the youngest member ever elected to the Académie.

In addition to his operas, Massenet composed concert suites, ballet music, oratorios and cantatas and about two hundred songs. Some of his non-vocal output has achieved widespread popularity, and is commonly performed: for example the Méditation from Thaïs, which is a violin solo with orchestra, as well as the Aragonaise, from his opera Le Cid and the Élégie for cello and orchestra (from his incidental music to Les Érinnyes). The latter two pieces are commonly played by piano students, and the Élégie became world-famous in many arrangements.

There have been periodic performances and recordings of Massenet's orchestral music, especially the seven suites. Naxos has issued the complete suites, as well as ballet music from Herodiade, as performed by the New Zealand Symphony Orchestra, conducted by Jean-Yves Ossonce.[1]

Being a very prolific, hard-working composer (over 25 extant operas, with his daily schedule starting frequently from as early as 4 am), he created his pieces not "at the piano" (as so many other composers do), but entirely from his imagination. That ability greatly helped him to achieve his high standards as an orchestrator. Even in his loudest passages, the instrumental texture is always lucid. It is curious that he was also known to avoid all public dress rehearsals and performances of his works; often he would have to be informed by others of his own operatic successes.

The only known recording by Massenet is a scene from Sapho where he accompanies the soprano Georgette Leblanc on the piano; never published, it is in the Historical Sound Recordings collection of Yale University.[4] 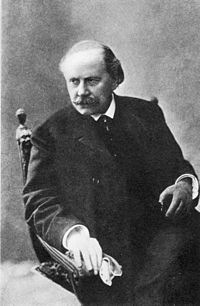 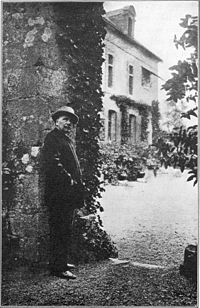 Massenet at his home in Égreville, near Fontainebleau. 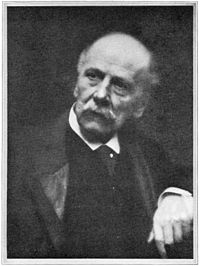