The Red-bellied Macaw, Orthopsittaca manilata, is a medium-sized, mainly green parrot. It is the only species of the genus Orthopsittaca, and it does not have any subspecies.

It is a resident bird in tropical Amazonian South America, from Colombia and Trinidad south to Amazonian Peru and Bolivia, and central Brazil as far as the northwestern cerrado of Brazil. Its habitat is forest and swamps with Moriche Palms (Mauritia flexuosa). Their life revolves solely around this species of palm tree. Although locally common, in places it has been adversely affected by clearing of the palms for use as posts, or to allow cattle ranching; also by capture for the pet trade. 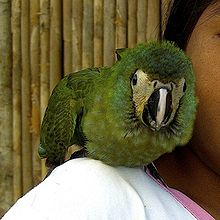 A pet juvenile in Peru

The Red-bellied Macaw a mainly green medium-sized macaw about 300 g in weight and about 46 cm (18 in) in length including its long pointed tail. Male and female have similar external appearances, and the adults have dark-grey beaks. The cere and much of the face are covered with bare mustard-yellow skin, and the irises are dark brown. The forehead is bluish. The chin, throat and upper chest are greyish with some green scalloping, and the lower abdomen is brownish-red. The underwings and undertail are dull yellow. The legs are dark grey. Juveniles are duller in colour than adults and have a grey beak that has conspicuous white mid-line stripe running along the length of the top of the upper beak (along the culmen).[1] The Spix's Macaw is the only other macaw that has a similar white culmen in the juveniles.

Red-bellied Macaws make reedy, high-pitched screams. They eat the fruit and seeds of palm trees, especially the Moriche Palm. They roost communally in these palms, and large numbers can be seen at the roost sites at dawn and dusk; (see crepuscular).

The Red-bellied Macaw nests in a hole in a tree, their primary choice being the Moriche Palm. There are usually two to four white eggs in a clutch. The female incubates the eggs for about 27 days, and the chicks fledge from the nest about 77 days after hatching.[2]

In the Amazon Basin, the North Region, Brazil, the Red-bellied Macaw is throughout, except in the northwest quadrant centered on a large region of the Rio Negro flowing from Colombia-Venezuela; it ranges through the Guianas including the Guiana Highlands into eastern Venezuela, the lower Orinoco River Basin and across to the island of Trinidad.

Its southern limit in Brazil is the south-central and northwestern cerrado bordering the Amazon Basin.