The Cuban Red Macaw, Ara tricolor, is an extinct species of parrot that was native to Cuba and the Isla de la Juventud, an island off the coast of west Cuba. At about 45–50 centimetres (18–20 in) long it was one of the smaller members of the Ara genus of macaws.[1] It was the last species of macaw native to the Caribbean islands to go extinct.[2] Several skins are preserved in museums; however, no eggs have survived.[1]

A pair was kept in the royal menagerie at Schönbrunn Palace, Vienna, Austria from 1760. 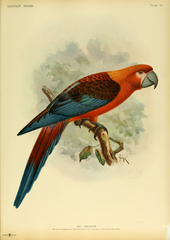 The Cuban Red Macaw was about 45–50 centimetres (18–20 in) long. It had a red forehead fading to orange and then to yellow a the nape of the neck. It had white unfeathered areas around the eyes, a dark brown bill paler at the tip, and yellow irises. The face, chin, chest, abdomen and thighs were orange. The legs were brown. The upper back was brownish red with feathers scalloped with green. The rump, undertail feathers, and lower back were blue. The wing feathers were brown, red and purplish blue. The upper surface of the tail was dark red fading to blue at the tip, and the under surface of the tail was brownish red. The adult male and female birds were identical in external appearance.[1]

The Cuban Red Macaw was reasonably common around 1800 on Cuba, and it probably also lived on Isla de la Juventud (previously called the Isle of Pines).[1] During the early 19th century, the human population in its home range increased dramatically, leading to widespread deforestation. The bird was also hunted for food although its meat tasted bad,[3] and nests were plundered or disturbed to acquire young birds to keep as pets.[2] Until 1849, the species seems to have been able to hold its own at least in remote areas, but subsequently, the population crashed, never to recover. At least 19 specimens are known to exist, the last one being shot in 1864 at La Vega in the vicinity of the Zapata Swamp, which seems to have been the last stronghold of the species.[1][2] Unconfirmed records suggest that birds persisted there until 1885.[2]