Spix's Macaw (Cyanopsitta spixii) is the only member of the parrot genus Cyanopsitta. They are critically endangered, possibly extinct in the wild (IUCN 3.1) The species is conserved through several breeding programs. It was found in Brazil, in parts of the Brazilian state of Bahia. It has a very restricted natural habitat due to its dependence on the Caraibeira (Tabebuia aurea) tree for nesting. 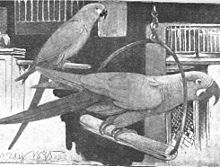 Illustration of Glaucous Macaw (foreground) with Spix's Macaw in Hamburg, 1895

Spix's Macaw is 55–57 cm (21.5–23.5 in) long. It is various shades of blue, including a pale blue head, pale blue underparts, and vivid blue upperparts, wings, and tail.[2] The underside of the wings and tail are black. They have a bare area of grey/black facial skin which sometimes fades to white when they are juveniles. The beak is entirely black except for juveniles which have a white stripe down the center of the beak. The white beak stripe and facial skin of juveniles disappears after 1–2 years. The birds' feet are light grey as juveniles, then become dark grey, and are almost black as adults. The eyes are dark as juveniles but fade to white as the birds mature.The mating call of Spix's Macaw can be described as the sound "whichaka". The sound is made by creating a low rumble in the abdomen bringing the sound up to a high pitch.[3] Its voice is a repeated short grating. It also makes squawking noises.

Spix's Macaw is named after the German naturalist Johann Baptist von Spix, who discovered the species in 1817.[4] The decline of the species is attributed to hunting and trapping of the birds, destruction of its habitat, and the introduction of the Africanized bee, which competes for nesting sites and kills breeding individuals at their nests. The last three birds were captured for trade in 1987 and 1988. A single male, paired with a female Blue-winged Macaw, was discovered at the site in 1990. A female Spix's Macaw released from captivity at the site in 1995 disappeared after seven weeks. The last wild male died at the site in October 2000.[2] The species probably became extinct in the wild around 2000, when the last known wild bird died.[2] No sightings of this macaw have been made in the wild since 2000, but part of the range has not been surveyed, so it can not be presumed to be extinct in the wild.[1] 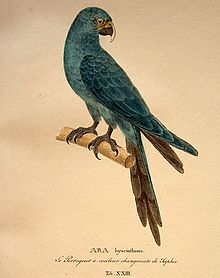 The Instituto Brasileiro do Meio Ambiente e dos Recursos Naturais Renováveis (IBAMA, Brazilian Institute of Environment and Renewable Natural Resources in English) established in 1990 the Permanent Committee for the Recovery of Spix’s Macaw, called CPRAA, and its the Ararinha Azul Project (Little Blue Macaw Project) in order to conserve the species. Other participants included BirdLife International, Birds International, WWF-Brazil, and the American Federation of Aviculture; most of the funding came from IBAMA and the Fundación Loro Parque (Loro Parque Foundation) of Spain.[5] Several exchanges of birds were made between institutions and individuals for increasing the probability of breeding based on DNA analysis as part of the program. "The first breeding occurred in Brazil, in the aviaries of the late Alvaro Rossman Carvalhaes, a once prominent aviculturist from Santos. The number and years in which Carvalhaes has bred Spix's has been the subject of much confusion: Low (1984, 1986 and 1990) and Keller have both written that he kept a pair in the 1950's and that eight young were reared during this period. King (1978-1979), in a presumable reference to the breeding pair reported that they died in the 1970's."[6] Birds International's efforts turned out to be the most successful: "Dr. Hammerli produced young Spix's macaws in 1984, however, Antonio de Dios has had the most successful breeding results at Birds International Inc. This collection has achieved a second generation breeding, a real breakthrough for the future survival of this species.".[7] The committee was dissolved in 2002 due to irreconcilable differences between the parties involved. In 2004 a committee was re-formed and re-structured under the title of “The Working Group for the Recovery of the Spix’s Macaw”.[3]

As at year 2010 there are approximately 85 Spix’s Macaws in captivity. 73 of these are participating in an international breeding program managed by the Institute Chico Mendes of Biodiversity Conservation (ICMBio), the Natural Heritage Branch of the Brazilian Government. 56 of these are managed at Al Wabra Wildlife Preservation (AWWP), State of Qatar, which took over the population of Birds International and where a captive breeding program is guiding Spix’s Macaw a step closer to re-establishment back to its natural habitat in Brazil.[8]

All chicks bred at AWWP have been hand-reared by experienced staff, since it is considered a safer option than parent-rearing and the priority at the moment is to increase the population. When the captive population is considered more secure, breeding pairs will be given the opportunity to raise some of their own young. All Spix’s Macaw chicks bred are required to be close leg banded with a uniquely coded ring and at the time of their first health check, they are also to be implanted with a micro-chip transponder.[3]