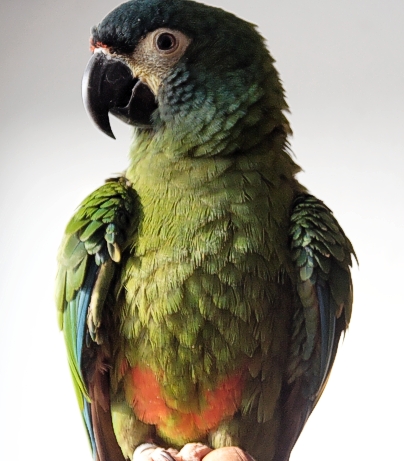 The Blue-winged Macaw ("Primolius maracana"), in more commonly known as Illiger's Macaw, is a of macaw found in central and eastern . It was previously placed in the "Ara" or "Propyrrhura". Blue-winged Macaws have been known to reach an age of 50-60 years.

It has a total length of approximately 40 cm (16 in). It has a heavy black bill, a long tail and a mainly green . The upperside of the and primary coverts are blue, as indicated by its . The underside of the wings is yellowish, the tail-tip, crown and cheeks are bluish, and the tail-base and small belly-patch are red. The iris is amber. It and the are the only macaws where the bare facial-skin is yellowish, but this often fades to white in captivity. Unlike the Red-bellied Macaw, the Blue-winged has a red lower abdomen and a red lower back.

The Blue-winged Macaw occurs in eastern and southern (with a remnant population north-east), eastern and, at least formerly, in far north-eastern . It occurs in and deciduous forests, with a preference for gallery forest. They mainly feed on seeds of , , and the non-native . However, the birds also feed on fruits and nuts.

The Blue-winged Macaw attain sexual maturity between 2 and 4 years after they are born. Adult females usually produce two eggs which take approximately 29 days to hatch. Young Blue-winged Macaws learn to fly about 11 weeks after they have hatched. They stay with their parents for about a year after learning to fly. Relatively little information exists on its reproduction in the wild, but the breeding season in north-eastern Brazil is apparently from December to February.

These birds are affected mostly by . They were also captured for the trade - from 1977 to 1979, 183 birds arrived to the from . It has declined in the southern part of its range, and there are no recent records from the in Argentina. Therefore, it was previously considered vulnerable. Information from Brazil suggests it remains widespread and even has re-colonised areas in its historical range in southern Rio de Janeiro. This has led to it being downlisted to .