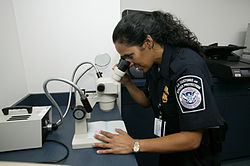 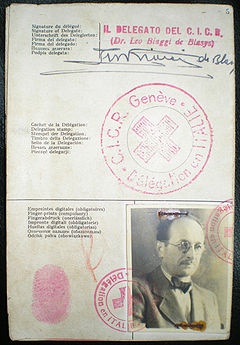 The Red Cross identitity document Adolf Eichmann used to enter Argentine under the fake name Ricardo Klement in 1950, issued by the Italian delegation of the Red Cross of Geneva

A fake passport is a passport (or another travel document) issued by governing bodies and then copied and/or modified by persons not authorized to create such documents or engage in such modifications, for the purpose of deceiving those who would view the documents about the identity or status of the bearer. The term also encompasses the activity of acquiring passports from governing bodies by falsifying the required supporting documentation in order to create the desired identity.

Such falsified passports can be used for escape into exile, identity theft, age deception, illegal immigration, and organized crime.

In comparison, a camouflage passport is an item that was never originally 'real' and then modified, instead it is manufactured to be fake initially. Finally, fantasy passports, as produced by United Passports, are simply novelty items that are meant to be souvenirs and are not intended to trick customs officials.

In June 2005, American actor Wesley Snipes was detained in South Africa at Johannesburg International Airport for allegedly trying to pass through the airport with a fake South African passport. Snipes was allowed to return home because he had a valid U.S. passport.[1]

In May 2001 Kim Jong-nam (the eldest son of the leader of North Korea) was arrested on arrival at New Tokyo International Airport (now Narita International Airport), accompanied by two women and a four-year old boy identified as his son. He was traveling on a forged Dominican Republic passport using a Chinese alias, Pang Xiong.[citation needed]

Alexander Solonik (Russian hitman in the early 1990s) lived in Greece with a fake passport, which he had obtained from the Greek consulate in Moscow.[citation needed]

Adolf Eichmann (high-ranking Nazi often referred to as "the architect of the Holocaust"), after the end of World War II traveled to Argentina using a fraudulently obtained laissez-passer issued by the International Red Cross and lived there under a false identity.[citation needed]

In October, 2000 Alexander Litvinenko (Russian dissident and writer) fled to Turkey from Ukraine on a forged passport using the alias Chris Reid, as his actual passport was confiscated by Russian authorities after criminal charges were filed against him.[citation needed]