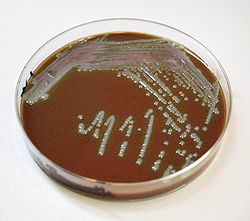 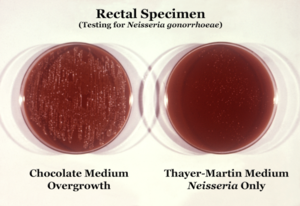 Chocolate agar (CHOC) - is a non-selective, enriched growth medium. It is a variant of the blood agar plate. It contains red blood cells, which have been lysed by heating very slowly to 56 °C. Chocolate agar is used for growing fastidious (fussy) respiratory bacteria, such as Haemophilus influenzae. These bacteria need growth factors, like NAD and hemin, which are inside red blood cells; thus, a prerequisite to growth is lysis of the red blood cells. The agar is named for the color and contains no actual chocolate.

Chocolate agar alone is non-selective, however with the addition of Bacitracin the media becomes selective, most critically, for the genus Haemophilus. A further variant containing an assortment of antibiotics selects for Neisseria.