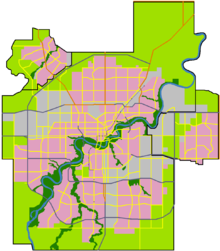 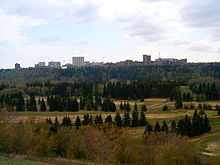 Looking south over the North Saskatchewan River valley, with a view of Victoria Golf Course and the University of Alberta

Wooden stairs into the river valley

Edmonton's river valley comprises over 20 major parks and attractions and forms one of the largest expanses of connected urban parkland in North America.[1][2] Referred to as a "Ribbon of Green",[2] the public river valley parks provide a unique urban escape area with park styles ranging from fully serviced urban parks to campsite-like facilities with few amenities.[citation needed] At 7,400 ha (18,000 acres) in size and 48 km (30 mi) in length, the river valley parks system consists of 22 ravines, which have a combined total length of 103 km (64 mi).[2] It also includes 11 lakes.[citation needed] Most of the city has bike and walking trail connections.[3] These trails are also part of the 235 km (146 mi) Waskahegan walking trail.[citation needed]

Several golf courses, both public and private, are also located in the river valley. The long summer daylight hours of this northern city provide for extended play well into the evening. Golf courses and the park system become a winter recreation area during this season. Cross-country skiing and skating are popular during the long winter. Four downhill ski slopes are located in the river valley as well, two within the city and two immediately outside.

The City of Edmonton has named five parks in its river valley parks system in honour of each of "The Famous Five".

The largest area in the river valley is occupied by municipal parks:

The provincial government owns the following sites in the river valley:

Hiking, cycling, and multi-use trails run throughout these parks and connect to other trails through the city and outside as well forming an integrated system. The river valley parks in particular are part of the Waskahegan and Trans Canada trail systems.

Trail into the river valley, near downtown

The River Valley Alliance is a grouping of municipal governments in the Edmonton region that have committed to expanding the River Valley Parks System outside of Edmonton's city limits. The plan calls for a 18,000-acre (73 km2) zone to be called the "Capital Region Valley Park" stretched over 88 kilometres running from Devon to Fort Saskatchewan.[5]

In January 2008, the City of Edmonton paid a record C$7 million to buy a parcel of land to fill in a gap in the otherwise continuous chain of parks. The city further promised to spend C$20 million of pedestrian bridges and trails, but said that the as yet unnamed park would be left in an undeveloped state.[6]