No Way Out (2005) was the seventh annual No Way Out pay-per-view (PPV) event produced by World Wrestling Entertainment (WWE). It took place on February 20, 2005 from the Mellon Arena in Pittsburgh, Pennsylvania.

The main event featured a Barbed Wire Steel Cage match for the WWE Championship between reigning champion John "Bradshaw" Layfield and The Big Show, in which JBL won via escape.[3] The predominant match on the undercard, was Kurt Angle versus John Cena, where the winner would face the WWE Champion for the title at WrestleMania 21.[1]

The main feud heading into No Way Out was between John "Bradshaw" Layfield (JBL) and The Big Show. At the 2005 Royal Rumble, JBL defended his WWE Championship in a Triple Threat Match against Kurt Angle and Big Show.[4][5] During the bout, members from Team Angle (Luther Reigns and Mark Jindrak) and JBL's Cabinet (Orlando Jordan and the Basham Brothers) interfered, and eventually the Cabinet helped JBL retain his championship by pinning Angle.[4][5] Later in the evening JBL entered the office of SmackDown! General Manager Theodore Long, who immediately announced a Barbed Wire Steel Cage Match between JBL and Big Show at No Way Out.[4][5] On the next edition of SmackDown!, Big Show defeated the Bashams in a handicap match.[6] In the following weeks, JBL and his cabinet attacked Big Show, and Big Show did the same thing to JBL and his cabinet.[7][8] 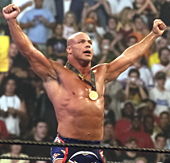 Kurt Angle, who lost to John Cena in the tournament.

The main match on the undercard was the Number One Contender tournament final. It was first announced by General Manager Long on the February 3 edition of SmackDown!, and he booked some of the first-round matches for that night.[6] The winner of the tournament would earn a main event spot challenging for the WWE Championship at WrestleMania 21.[6] The first match of the tournament was The Undertaker versus Rene Dupree.[6] The match ended in a double countout due to Reigns preventing the Undertaker from re-entering the ring.[6] He did this at the request of Angle, who was scheduled to face the winner of that match if Angle won his.[6] The double countout meant that neither man advanced in the tournament, thereby giving a bye in the semi-finals to the winner of the other qualifying match.[6] The next first round match was Eddie Guerrero against Booker T.[6] Booker won the match by pinfall, even after Guerrero had faked a knee injury to try to gain the advantage.[6] The next first-round match in the tournament was John Cena versus Jordan, which Cena won.[7] The next match was Angle against Rey Mysterio, which Angle won by forcing Mysterio to submit by using his Ankle Lock.[7] Due to this win and the double countout the week before, Angle received a bye into the finals of the tournament.[6][7] The following week, Cena had his semi-final against Booker, which he won after an FU.[8] Cena and Angle faced off at No Way Out in the final match of the tournament.[8]

Before the event went live on pay-per-view, Hardcore Holly and Charlie Haas defeated Kenzo Suzuki and René Duprée, with Hiroko, in a match taped for Heat.[1] The match ended after Holly performed an Alabama Slam on Suzuki and pinned him.[1] The first match that aired on pay-per-view was the WWE Tag Team Championship match between the champions, The Basham Brothers, Doug and Danny, and the challengers, Eddie Guerrero and Rey Mysterio.[1][3] Early in the match, the Bashams kept Mysterio isolated from Guerrero, until Mysterio was able to use a moonsault to gain some time.[3] He tagged Guerrero, who hit Doug with a title belt.[3][9] After a 619 from Mysterio, Guerrero pinned Doug for the win and tag team championships.[1][3]

The second match was the bout between Heidenreich and Booker T.[1][3] Heidenreich dominated Booker for the entire match, both out and in of the ring.[3] He ended up being disqualified after hitting Booker in the throat with a Steel chair.[3][9] After he had been disqualified, Heidenreich attempted to pin Booker in the ring.[1][3] The next match was the Cruiserweight Open for the WWE Cruiserweight Championship.[3][9] The first two competitors were the defending champion, Funaki, and Paul London. London pinned Funaki with the help of Spike Dudley, who entered early.[3][9] Then, with the help of the eliminated Funaki, London pinned Dudley.[3][9] The next participant was Shannon Moore, who missed a Corkscrew Moonsault. London performed a 450° splash to gain the pinfall victory.[1][3] The fifth entrant was Akio.[1][3] He was eliminated by countout after he and London collided, but Akio failed to make it back up to his feet in time.[3][9] The final participant was Chavo Guerrero.[1][3] Guerrero took control of the match, and when London tried to use a roll-up, Guerrero countered, and pinned London, using the ropes for leverage.[1][3]

The fourth match on the card was The Undertaker versus Luther Reigns.[3][9] Mark Jindrak accompanied Reigns to the ring, but was thrown out before the match started.[3] Reigns hit the Undertaker with the ring bell, before using submission moves to try and win the match. The Undertaker, however, countered with a Tombstone piledriver to pin Reigns.[3][10] The fifth bout was the final of the Number One Contenders Tournament between Kurt Angle and John Cena.[3][10] Angle performed a German Suplex, throwing Cena into the turnbuckles to gain control in the early stages of the match.[3][10] Angle applied his Ankle Lock, but Cena was able to get out of it, and eventually hit an FU.[3][10] He was unable to capitalise, however, and Angle fought back, applying another Ankle Lock, but this time Cena was able to get the rope-break.[3][10] Angle continued to dominate, until the referee was knocked down.[10] Angle attempted to get Cena's signature steel chain to attack him with, however, Cena quickly countered with the FU to pin Angle, and earn a Championship match at WrestleMania 21.[3][10] 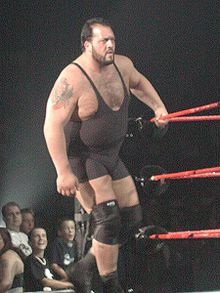 The Big Show who challenged for the WWE Championship.

Immediately before the main event, the third event in the 2005 Rookie Diva of the Year competition took place.[1][11] The participants were Michelle McCool, Joy Giovanni, Lauren Jones, and Rochelle Loewen, and the segments were hosted by Torrie Wilson and Dawn Marie.[9][10] The first event was an "evening gown" competition, which took place after the WWE Tag Team Championship match.[3][10] The next event was the "Talent Contest", and the final one was the "Swimsuit Competition".[3][10] The eventual winner was Giovanni, with 65% of the online votes that took place throughout the show.[3][9][10]

The main event was the Barbed Wire Steel Cage match for the WWE Championship between the champion John "Bradshaw" Layfield (JBL) and the challenger The Big Show.[9][10][12] JBL took the early advantage in the match, and tried to climb the cage to escape, but was stopped by the barbed wire on the top.[3][10] He then sent Big Show head first into the steel cage, cutting him open.[3][10] Big Show retaliated and took control, prompting JBL's Cabinet to run down to try and help.[10][12] Orlando Jordan attempted to climb the cage, while the Basham Brothers used a pair of bolt cutters to cut a small hole in the cage.[3][10] General Manager Theodore Long ejected the Cabinet from ringside, but Jordan passed the bolt cutters through the cage to JBL.[10][12] JBL used them to hit Big Show, but only got a two-count.[10] Big Show recovered and performed a chokeslam from the top rope, sending JBL through the mat.[10][12] Big Show then broke through the door of the cage, but JBL had crawled out from underneath the ring, and had hit the floor first, making JBL the winner.[9][10][12] Big Show then attacked JBL after the match, until the Cabinet intervened.[9][10] They attacked Big Show, until Batista made the save, followed by Cena, who attacked JBL.[9][10] 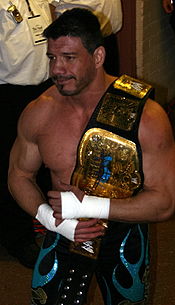 Eddie Guerrero as one half of the WWE Tag Team Champions.

On the following edition of SmackDown!, Eddie Guerrero and Rey Mysterio successfully defended the WWE Tag Team Championship against the former champions, the Basham Brothers.[13] They continued to defend the titles against other teams, including Mark Jindrak and Luther Reigns,[14] John "Bradshaw" Layfield (JBL) and Orlando Jordan[15], and Hardcore Holly and Charlie Haas.[16] Guerrero, however, challenged Mysterio to a match at WrestleMania 21, to find out who was the better wrestler, which Mysterio accepted.[16] The following week, on SmackDown!, Guerrero faced Danny Basham, but Mysterio accidentally cost him the match.[17] Later that night, Guerrero cost Mysterio his match against Doug Basham.[17] At WrestleMania, Mysterio defeated Guerrero.[18] Mysterio and Guerrero lost the tag titles on April 21, to MNM, after Mysterio was pinned while Guerrero was distracted by MNM's manager, Melina.[19]

Booker T and Jon Heidenreich continued their feud, and they had a rematch a few weeks later on SmackDown!. Heidenreich won by Disqualification after Booker performed a DDT onto a steel chair.[14] The following week, in a no-disqualification match, Booker won after a chairshot.[15] Booker then moved on to a feud with Reigns, and was accompanied by his new wife, Sharmell.[17][20] Reigns had fallen out with his tag team partner, Jindrak, just a few weeks prior, setting up matches between them.[14][15]

Kurt Angle entered into a feud with Shawn Michaels, with the pair fighting over who was the better wrestler in WWE. This feud had begun at the Royal Rumble, where Michaels had eliminated Angle.[4] Angle then returned to the ring, and eliminated Michaels, before attacking him.[4] A few weeks later, Michaels challenged Angle to a match at WrestleMania.[27] On February 28, Angle appeared on Raw, attacking Michaels, and accepting his challenge.[23] On the next edition of SmackDown!, Michaels ambushed Angle in the ring, and the two of them brawled, until security broke it up.[14] Angle claimed that he was better than Michaels, and said he would prove it by achieving everything that Michaels had, but doing it faster.[15] He then won a ladder match, mocking Michaels match from WrestleMania X.[15] He then challenged Marty Jannetty, Michaels former tag team partner to a match.[15] He won after Jannetty tapped out.[20] Angle also persuaded Michaels' former manager, Sensational Sherri to do a spoof of Michaels' theme song, "Sexy Boy", calling his version "Sexy Kurt".[16] Michaels, however, interrupted and played a video highlighting all his accomplishments.[16] When Sherri got emotional from watching the video, Angle put her in the Ankle Lock.[16] Angle also interfered in Michaels' matches on Raw.[25] At WrestleMania, Angle won by making Michaels submit to his Ankle Lock.[18][26]

John "Bradshaw" Layfield (JBL) went on to face John Cena at WrestleMania.[18][26] On the SmackDown! after No Way Out, Cena and The Big Show defeated JBL and Orlando Jordan.[13] The following week, JBL cut a promo and Cena, and insulted him, while Cena defended his United States title against Jordan.[14] Jordan won the match after the Basham Brothers distracted the referee, and JBL hit Cena with the WWE Championship belt.[14] They then blew up Cena's customized design of the United States Championship, and replaced it with the original one.[15] Later that night, Cena attacked the General Manager, Long, and was thrown out of the arena.[15] During JBL's match that night, Cena returned and attacked JBL's cabinet.[15] The next week, Long announced that if Cena laid a hand on JBL, apart from in matches, he would lose his WrestleMania match.[20] In a six-person tag team match that night, Cena's team won, but Cena had to stop himself from attacking JBL after the bell had rung.[20] On a later edition of SmackDown!, Long clarifies that if JBL physically provoked Cena, then Cena could retaliate.[16] Cena then attempted to provoke JBL, by vandalising his limousine, and spray painting "FU" on JBL's shirt.[16] On the last SmackDown! before WrestleMania, however, JBL had Cena arrested for vandalism and, once Cena was handcuffed, attacked him.[16] At WrestleMania, Cena pinned JBL after an FU, to win the WWE Championship for the first time.[18][26][28]

The tournament to determined the #1 Contender for the WWE Championship match at WrestleMania 21 was held between February 1 and February 20, 2005. The tournament brackets were: