No Way Out (2007) was the ninth annual No Way Out pay-per-view (PPV) event produced by World Wrestling Entertainment (WWE). It took place on February 18, 2007 at the Staples Center in Los Angeles, California and was the final branded pay-per-view before all pay-per-view events became tri-branded.[3][4]

The main event was an interpromotional tag team match between Batista and The Undertaker (from SmackDown!) and John Cena and Shawn Michaels (from Raw). Cena and Michaels won the match after Cena pinned Undertaker following an FU.[5][6] The main match on the undercard was an interpromotional Six-man tag team match between the team of Chris Benoit and The Hardys (Matt and Jeff) and the team of MNM (Joey Mercury and Johnny Nitro) and Montel Vontavious Porter, which was won by the Hardys and Benoit after Benoit forced Mercury to submit to the Crippler Crossface.[5][7]

The event featured eight professional wrestling matches with outcomes predetermined by WWE script writers. The matches featured wrestlers portraying their characters in planned storylines that took place before, during and after the event. 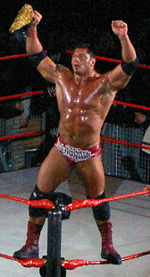 Batista, the World Heavyweight Champion and tag team partner of The Undertaker at this event

The main feud heading into No Way Out was between SmackDown!'s World Heavyweight Champion Batista and his partner, The Undertaker, and Raw's WWE Champion John Cena and Shawn Michaels. This feud began after Undertaker won the 2007 Royal Rumble match.[8] The following week on an episode of SmackDown!, the two world champions demanded an answer from Undertaker as to who he would face at WrestleMania, but Michaels interfered, as he also wanted an answer from Undertaker.[9] As they awaited for Undertaker's answer, Vince McMahon, the WWE Chairman, made an appearance and announced an interpromotional tag team match between the two pairs of brand representatives.[9] On the February 5, 2007 episode of Raw, Undertaker made his decision to face World Heavyweight Champion Batista at WrestleMania 23, sending a message through a chokeslam.[10] Michaels then became Cena's challenger at WrestleMania 23 after winning a Triple Threat match against Randy Orton and Edge.[10] On the February 15, 2007 episode of Raw, the brand representatives were pitted in an eight-man tag-team match against Rated-RKO (Orton and Edge), Mr. Kennedy, and Montel Vontavious Porter in which the brand representatives were victorious.[11] The Raw representatives went on to win the World Tag Team Championship, although Michaels made many attempts to superkick Cena during the road to No Way Out.[12] On the February 16, 2007 episode of SmackDown!, Undertaker and Batista again teamed up to face Rated-RKO and were victorious via pinfall.[13] 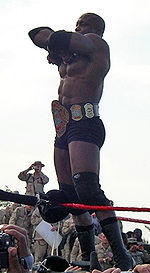 Bobby Lashley, the ECW World Champion heading into the event

The secondary feud heading into No Way Out was between Chris Benoit and The Hardys against MNM and Montel Vontavious Porter (MVP). This feud began shortly after MNM reformed, when they challenged the reunited Hardys at December to Dismember in a losing effort.[14] They then continued to wrestle on episodes of Raw, ECW, and SmackDown! until Armageddon, when Mercury suffered a legitimate severe facial injury.[15] On the February 16 edition of SmackDown!, SmackDown General Manager Theodore Long announced a ladder match between Paul London and Brian Kendrick, Dave Taylor and William Regal, MNM, and The Hardys for the WWE Tag Team Championship, but WWE's official website announced the match had changed to pit The Hardys and Chris Benoit against MNM and MVP, while Brian Kendrick and Paul London faced Deuce 'n Domino in a separate match.[16][17][18] Benoit and MVP were added to the match on short notice, as they were not feuding at the time.[18][19]

The third feud heading into No Way Out was between Kane and King Booker. This feud began during the 2007 Royal Rumble match when Kane eliminated King Booker from the match, but Booker returned unofficially to eliminate Kane.[20] The feud continued on the February 2, 2007 episode of SmackDown! during King Booker's Key to the City ceremony in Houston, Texas, when Kane interrupted the ceremony and attacked King Booker.[9] After they continued to feud during the weeks leading up to No Way Out, Theodore Long booked a match between the two at No Way Out.[16] On the February 16, 2007 episode of SmackDown!, King Booker mocked Kane by dishonestly reviewing Kane's See No Evil movie, but Booker ran out when Kane came in to attack him.[13]

The fourth feud heading into No Way Out was between Bobby Lashley and Mr. Kennedy. This feud began on the February 23 episode of SmackDown! when Lashley made a guest appearance to visit Theodore Long.[13] Mr. Kennedy voiced his opinion to Lashley, reminding Lashley that he had beaten him before and claiming that he could to it again. Long then scheduled a match between the two for the ECW World Championship at No Way Out after contacting ECW officials.[13]

Before the event aired live on pay-per-view, a dark match between Rob Van Dam and Shelton Benjamin took place.[5][21] Van Dam won the match by pinning Benjamin after performing a Five-star frog splash.[5][21]

The first match that aired was the six-man tag team match between the team of The Hardys (Matt Hardy and Jeff Hardy) and Chris Benoit and the team of MNM (Johnny Nitro and Joey Mercury) and Montel Vontavious Porter.[17][21] The match began with Porter and Benoit, and Benoit gained the early advantage over Porter. The Hardys and Benoit remained with the advantage until MNM got involved in the match. MNM illegally double teamed The Hardys while the referee was distracted.[5][6] Benoit was then tagged into the match, and MNM attempted to perform a Snapshot on Benoit. Benoit, however, countered the maneuver into a Crippler crossface on Mercury, who submitted, thus making The Hardys and Benoit the winners.[17][22][23] 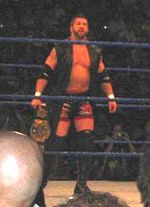 Gregory Helms, the Cruiserweight Champion heading into the event

The next match was the encounter between King Booker and Kane.[5][21][26] The match started off with Kane gaining the advantage over Booker, which he held throughout the beginning of the match. Kane then attempted a chokeslam, but Booker contered the maneuver into a Scissors kick. Kane, however, managed to counter this with a clothesline.[6][7] Queen Sharmell, who was at ringside in Booker's corner, distracted Kane, allowing Booker to hit him with a heel kick. Kane retaliated by performing a chokeslam on Booker and covering him to win the match via pinfall.[5][22][26]

The fifth match was a tag team match for the WWE Tag Team Championship between Deuce 'n Domino and the defending champions, Paul London and Brian Kendrick.[5][21][27] There was back and forth action between the teams in the beginning of the match; however, Deuce 'n Domino gained the advantage over Kendrick and London, as they focused on wearing down London, not allowing him to tag in his partner.[22][23] London was eventually able to tag Kendrick into the match, after which Domino attempted an aerial attack from the top rope. He missed Kendrick with the attack, however, allowing Kendrick to roll him up for the pin. As a result, London and Kendrick won the match and retained the WWE Tag Team Championship.[5][7][27] 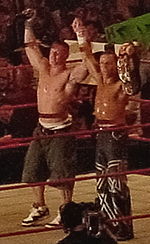 John Cena and Shawn Michaels, the World Tag Team Champions and Raw representatives at this event

The sixth match was an ECW World Championship match between defending champion Bobby Lashley and Mr. Kennedy.[5][21][28] As Kennedy made his entrance towards the ring, Lashley attacked Kennedy in the aisle, delaying the start of the match.[6][23] When Lashley and Kennedy finally entered the ring, Kennedy attempted many submission holds to no avail, but he continued to attack Lashley in an attempt to keep him from getting up.[7][23] Kennedy then left the ring to get a steel chair, but Lashley took the chair and attacked Kennedy with it, which caused the referee to end the match as a result of a disqualification. Kennedy won the match, but due to WWE rules, Lashley retained the ECW World Championship.[22][28] After the match, Lashley hit Kennedy with a steel chair repeatedly until WWE officials ran in to control Lashley.[5][21][28]

After the sixth match, there was a Diva Talent Invitational hosted by The Miz, featuring divas from SmackDown! and Raw as well as vixens from ECW. First, Extreme Expose danced to Rich Boy's "Boy Looka Here".[22][29] Next, Jillian Hall sang a song, but The Miz stopped her from continuing.[6][23] Candice Michelle, Ariel, and Maria came out next, but before they presented their talent, a catfight broke out among the three divas.[5][22] Ashley then came out, but before she made her way down to the ring, she took her top off to reveal her breasts covered with pasties in the form of the Playboy logo. The Miz then declared Ashley the winner of the Diva Talent Invitational.[6][22][29]

The main event was an inter-promotional tag-team match between SmackDown!'s Batista and The Undertaker and Raw's tag team champions John Cena and Shawn Michaels.[5][21][30] The match started off with Cena and Batista, and Batista gained the advantage over Cena. Undertaker and Batista then continued to wear down Cena and Michaels before throwing them over the top rope to ringside.[22][23] As Cena returned into the ring, he attempted to perform an FU on Batista, but Undertaker interfered. This allowed Batista to counter the maneuver into a Batista Bomb, but Cena managed to escape after Michaels interfered.[6][7] As Batista gave Michaels a Spinebuster, Undertaker executed a chokeslam on Cena.[7][30] Undertaker then prepared to perform a Tombstone piledriver on Cena; however, Batista turned on Undertaker by performing a Spinebuster on him. Batista then exited the ring, allowing Michaels to perform Sweet Chin Music and Cena to execute an FU on Undertaker. Cena then pinned Undertaker to win the match for his team.[5][21][30]

Mr. Kennedy winning the Money in the Bank ladder match at WrestleMania 23

After Kane defeated King Booker at No Way Out, the two continued to feud on SmackDown! in a Money in the Bank qualifying match on February 23, 2007. The feud, however, ended after Booker defeated Kane to qualify for the Money in the Bank ladder match. Kane then began a feud with The Great Khali, who came out to the ring to attack Kane after the match.[33] At WrestleMania 23, however, Kane lost to Khali via pinfall.[34]

After No Way Out, The Hardys qualified for the Money in the Bank ladder match at WrestleMania 23 but were unsuccessful in winning the match,[12][35] as Mr. Kennedy won it.[36] Chris Benoit and Montel Vontavious Porter began a feud over the WWE United States Championship, and Benoit successfully defended his championship against Porter at WrestleMania 23.[37] After this event, MNM's reunion ended, as Joey Mercury was released by WWE on March 26, 2007.[38] After Bobby Lashley was disqualified at No Way Out, he was chosen to represent Donald Trump at WrestleMania 23 against Vince McMahon's representative, Umaga, in the Battle of the Billionaires: Hair vs. Hair match.[12] Lashley won the match at WrestleMania and the right for Trump to shave McMahon's head.[39][40]