Dawn Marie Psaltis[3] (born November 3, 1970) is an American former professional wrestler and professional wrestling valet. She is perhaps best known for her appearances with Extreme Championship Wrestling (ECW) and the SmackDown! brand of World Wrestling Entertainment (WWE) under her ring name Dawn Marie, where she was a WWE Diva.

Before entering the sports entertainment industry, Psaltis made her living in real estate.[4] After deciding to pursue a career in modeling or acting, Psaltis began managing wrestlers on the independent circuit after meeting a wrestling promoter.[5][6] She signed a deal with ECW after what was supposed to be a three week stint.[5][6][7] She managed the Impact Players and Simon and Swinger until ECW's bankruptcy in 2001.[3][8]

Psaltis then joined WWE, where her most notable storyline involved her marrying Al Wilson, the father of her rival Torrie Wilson.[9] She was released from her WWE contract in 2005 after revealing that she was pregnant, which resulted in her filing a lawsuit against her former employers.[10]

Psaltis was raised by her father, a zoologist, and together, they spent their time camping and hunting.[4] In her youth, she was a fan of the World Wrestling Federation (WWF), admiring wrestlers such as Bob Backlund, Jimmy Snuka, and Roddy Piper.[4] Psaltis graduated from the New York University Stern School of Business at the age of 22.[4] She then went on to work for a real estate consultancy firm in Manhattan, New York, reaching the position of Director of International Real Estate.[4][5][7]

After meeting an ex-boyfriend who had aspired to play football professionally and finding out that he had been signed by the Chicago Bears, Psaltis decided that she wanted to pursue a career in entertainment.[4] She resigned from the firm and moved into the entertainment industry with the goal of becoming either a model or an actress.[4][5]

While signing modeling posters for Jonathan Gold, a talent agent and professional wrestling promoter, Psaltis jokingly told Gold that she would be interested in pursuing a career in wrestling.[5][6] Gold took her comment at face value and later contacted Psaltis, informing her that she was scheduled to appear at a wrestling show in New Jersey.[5][6] With some trepidation, she went to the show and managed Tony Atlas in his match against Jimmy Snuka.[4][5][6] Psaltis made her professional wrestling debut in January 1995.[2] She met her future fiancé Simon Diamond during her time in the independent wrestling promotions.[7] She also met Buddy Landell and Devon Storm, both of whom helped train her.[4] Psaltis spent four years working on the northeastern independent circuit, appearing with promotions such as Maryland Championship Wrestling and the Mid-Eastern Wrestling Federation.[4]

In 1998, Psaltis was informed that Extreme Championship Wrestling (ECW) employee Buh Buh Ray Dudley was interested in bringing her into ECW.[5] At the behest of Dudley, Psaltis traveled to the ECW Arena in Philadelphia, Pennsylvania, where ECW promoter Paul Heyman told her that he would book her for several appearances in an angle with Lance Storm.[5] She debuted in ECW on August 28, 1998 as the manager of Storm, feuding with Chris Candido and his manager, Tammy Lynn Sytch.[3][5][6] Although she was only supposed to have a three week role in the company,[7] Heyman was impressed by the chemistry between Psaltis and Storm and offered her a contract, which she accepted.[5][6] Psaltis created her character to be in love with Storm and clumsy rather than glamorous.[6]

Storm and Psaltis feuded with Candido and Sytch for several months, during which time Psaltis was renamed "Tammy Lynn Bytch" to spite Candido and his manager.[2] After the respective feuds ended, she used the ring name "Dawn Marie Bytch," which was eventually shortened to simply Dawn Marie.[2] After Storm formed a tag team with Justin Credible known as the Impact Players in the summer of 1999, she managed both men,[3] helping them win the ECW Tag Team Championship on two occasions.[11] Psaltis continued to manage Storm until he left ECW for World Championship Wrestling (WCW) in May 2000.[4][7] Psaltis was also offered a contract by WCW, but declined to leave ECW in order to remain with her fiancé, ECW wrestler Simon Diamond.[7] She also had two years left on her ECW contract.[4]

After Storm departed ECW, Psaltis became a color commentator on ECW pay-per-views and the television series ECW on TNN.[12] On December 3, 2000 at the Massacre on 34th Street pay-per-view, as part of a new angle, she announced that she would become the manager of the winner of the opening match pitting Simon Diamond and Swinger against Christian York and Joey Matthews.[8] Although York and Matthews won the bout, Psaltis opted to join forces with Diamond and Swinger, whom she managed until ECW declared bankruptcy in April 2001.[3][8]

Following the bankruptcy of ECW, Psaltis returned to the independent circuit, managing Diamond.[3] The duo made several appearances alongside Swinger with the short lived X Wrestling Federation in November 2001.[6] During her time on the independent circuit, she trained as a wrestler under Simon Diamond and Mikey Whipwreck.[3][7] Also in 2001, Psaltis worked as a stock trader, and in 2002, she co-hosted a syndicated wrestling radio show known as the "Piledriver Rock and Wrestling Radio Show".[7][13] 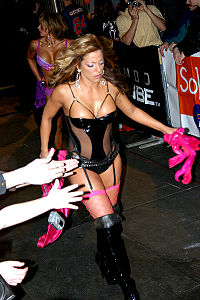 In April 2002, Psaltis began negotiating with the World Wrestling Federation (WWF), eventually agreeing to a deal. She made her World Wrestling Entertainment (WWE) television debut on the May 30 episode of SmackDown! as Vince McMahon's legal assistant.[14] She debuted with the name "Dawn Marie Rinaldi" although it was quickly shortened to the original "Dawn Marie". In her initial storyline, she briefly feuded with Stacy Keibler over McMahon's affections until McMahon turned over the General Management position to his daughter, Stephanie McMahon,[15] which was followed shortly by Keibler's departure for the RAW brand.[16]

Psaltis' most high profile storyline during her first few years with the company was in 2002 and 2003 when she feuded with Torrie Wilson. In the angle, Psaltis attempted to marry Wilson's real-life father Al Wilson.[9][17][18][19] She also revealed that she had developed feelings for Torrie, and the two shared an on-screen kiss.[9][20] Psaltis even offered to cancel the wedding if Torrie would go to a hotel with her for the night.[21] Despite this, as part of the angle, she developed feelings for Al, and the two got married on an episode of SmackDown! in their underwear.[6][20] Al then, in storyline, died from a heart attack after having rigorous sex numerous times in succession on their honeymoon.[6][20][21][22][23] In response, Wilson defeated Psaltis at No Mercy in October.[24] She defeated Psaltis again at the Royal Rumble in 2003 in what was billed as a Stepmother vs. Stepdaughter match.[21][23] The feud lasted approximately nine months.[17]

Later, Psaltis began a second feud with Wilson. As part of the feud, the two had a match with Wilson's career on the line when the SmackDown! General Manager at the time, Kurt Angle, made the stipulation for the match at Judgment Day, which Wilson won.[25] After being on hiatus from SmackDown! programming, Psaltis began a new storyline with Miss Jackie, involving whether she and Jackie's fiancée, Charlie Haas, had an affair.[26] This angle led up to a match between the two at Armageddon, with Haas as the guest referee.[26] Psaltis won the match, but afterward, Haas confirmed their affair and broke off both relationships.[26]

Her last appearance with the company was at ECW One Night Stand,[2] managing Lance Storm for his match against Chris Jericho. Afterward, she was released from her WWE contract on July 6, 2005 while on maternity leave, as she was pregnant.[10]

On November 5, 2005, a visibly pregnant Psaltis appeared at the ECW reunion event Hardcore Homecoming: November Reign, which is unaffiliated with World Wrestling Entertainment, holding the key for the main event steel cage match between Jerry Lynn and Justin Credible.[27] The match was won by Justin Credible after Psaltis, Jason Knight, and Lance Storm interfered on his behalf.[27] In June 2006, she managed Johnny Candido in a match for the National Wrestling Superstars promotion.[2]

In July 2009, Psaltis signed with Dragon Gate USA as the "Live Event Hostess", a role similar to that of the ring announcer.[28]

Psaltis starred in The Vampire Carmilla, a 1999 independent film. In 2008, she appeared in the second installment of Paul Heyman's The Heyman Hustle video blog, which featured her and Heyman on the streets of New York City in winter, with Psaltis wearing only a bikini under a fur coat.[29]

While wrestling in ECW, Psaltis took one college class a semester because of her love of learning and reading.[4] She also took acting classes with the intention of becoming an actress after her career in professional wrestling was over.[4]

Psaltis began dating Simon Diamond in October 1998.[3][4] Before dating, the two had been good friends for almost two years.[4][30] They had planned to be married by the end of 2000 or into 2001.[4][5] They did not wed, but stayed engaged for several years afterwards.[7] After seven years together, their relationship had come to an end.[30]

Later, Psaltis met Matt, whom she married in June 2005 in Las Vegas.[30] On December 20, 2005, Psaltis gave birth to her first child, a boy named Matthew.[2][30] In January 2006, she filed a complaint against WWE with the Equal Employment Opportunity Commission, claiming that her contract had been wrongfully terminated as a result of her pregnancy and that she had suffered mental duress as a result of the release.[2] The case was reportedly settled in late 2007.[10]