Maureen "Big Mo" Harris (née Porter) is a fictional character from the BBC soap opera EastEnders, who has been in the series since 18 September 2000, played by Laila Morse. Mo is also played by Lorraine Stanley in a soap 'bubble' Pat and Mo, delving into her past with Pat Evans, which aired in 2004. Mo provides a background of light entertainment.

Mo Porter was born in 1936, the eldest child of an impoverished family in the East End of London. At the age of 14 she becomes pregnant following a one-night stand with Stuart Mullins, a ticket collector for the Waltzer ride at a fairground in South London, and gives birth to their daughter Vivienne the following year in 1951. Best friends with Pat Harris, Mo falls for Pat's older brother Jimmy and after a whirlwind romance they marry in 1959 and go on to have two children of their own: Billy and Jean. However, Pat threatens to disrupt their marriage due to her alcoholism and eventual prostitution, which diverts Jimmy's attention away from Mo and onto Pat; this results in Mo beginning an affair with Pat's pimp Tony Cattani in 1963. When Pat discovers them together she informs her brother but Mo denies Pat's accusations and as a result Jimmy disowns Pat and they move away to Lewisham. Jimmy later dies of cancer in 1979. His final wish is to make amends with his sister Pat but instead Mo neglects to inform her of both his death and his funeral.

Mo returns to Walford after almost forty years away along with her son-in-law Charlie Slater (Derek Martin) and granddaughters Lynne (Elaine Lordan), Kat (Jessie Wallace), Little Mo (Kacey Ainsworth) and Zoe (Michelle Ryan). Mo's rivalry with Pat (Pam St. Clement) arises again, but they reconcile at Jimmy's grave on the twenty-fifth anniversary of his death. Much of Mo's time is spent selling stolen goods, which are normally of poor quality, and she trades with a man known by "Fat Elvis". She is assisted by both Mickey (Joe Swash) and Darren Miller (Charlie G. Hawkins) and for a while sets up a sex chatline. She works selling clothes for Charlie's great-niece Stacey (Lacey Turner) on her market stall. She has a brief relationship with Bert Atkinson (Dave Hill), but ends it because Bert is sleeping with her friend, Ina. They get back together but break up again when Bert's ex-wife Evie (Marji Campi) arrives in Walford, terminally ill. Mo begins selling cigarettes that she bought in Spain and two of her customers turn out to be Revenue and Customs officers. She is sentenced to 100 hours of community service for tax evasion. After Stacey marries Bradley Branning (Charlie Clements), Mo tries to sell their wedding gifts.

Mo sees Charlie's partner Brenda Boyle (Carmel Cryan) embracing another man at the tube station, but it turns out to be Brenda's brother. Brenda reveals to Mo that she is moving to Madeira with her family, and Mo convinces Charlie not to let her go. However, Brenda and Charlie leave together, leaving Mo devastated. She begins drinking heavily, and protests against the sale of Charlie's taxicab. Charlie then returns to Walford with a woman called Orlenda (Mary Tamm) but Mo does not trust her. Orlenda eventually leaves after admitting she was scamming Charlie, but returns his money. Mo takes charge of a children's nativity play but fails to keep the children under control. In a raffle, she wins Max Branning's (Jake Wood) car but then sells it, to Max's dismay. When Archie Mitchell (Larry Lamb) is murdered, Mo starts a betting circle on who killed him. She runs when she sees a police officer, but later, another officer appears behind her and she asks him if he wants to place a bet. She goes on holiday to Spain with Fat Elvis and when she returns she is surprised to learn that Bradley is dead. Mo attempts to sell Lucas Johnson's (Don Gilet) bibles to the public as gruesome souvenirs of the killer. Her insensitivity gets her thrown out of The Queen Victoria public house.

Mo receives a phone call from Kat who wants Zoe's birth certificate. Mo meets Kat at a café, and gives her the certificate. Kat reveals to Mo that she conned a man, and now needs a new identity. Kat also lies to Mo, and says that her husband Alfie Moon (Shane Ritchie) is dead. Mo persuades Kat to come home to see her family, and Kat reluctantly accepts but when they both get home, men are waiting for Kat and her money. Alfie turns up at the Slater house and chases the men away. Mo is then shocked to learn that Kat is pregnant, and Alfie is not the father. When Kat goes into labour, Mo delivers her son, Tommy, on the floor of The Queen Victoria's barrel store. On the same day, Ronnie Branning (Samantha Womack) gives birth. On New Year's Eve, Ronnie's baby dies of cot death and she secretly swaps the babies. Alfie and the rest of the family then discover the dead baby, believing it to be Tommy. After Kat blames Charlie for Tommy's death, Charlie decides to go and live with Lynne. Mo begs him not to leave but he goes, leaving her upset. Left living alone, Mo asks Kat if she can move into The Queen Victoria with her and Alfie and rent number 23. Kat refuses at first but later agrees when Mo reminds her that she never complained about living with Kat's bad habits. 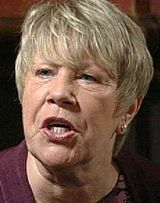 The character of Mo and the rest of the Slater family were created during workshops with Tony Jordan and John Yorke. London actors were invited to improvise in groups, and the characters were created during these improvisations.[1][2] According to the BBC's head of drama series, Mal Young, the family was brought in as the serial did not "have enough solid families in the soap, there were a lot of fractured families and people who were alone."[2] Laila Morse was cast as Mo, and made her first on-screen appearance on 18 September 2000. She was named "Arrival of the Year" by TV critic Ian Hyland in 2000.[3]

The character of Mo has appeared in two spin-offs of EastEnders. She appeared in the 2004 'soap bubble' EastEnders: Pat and Mo, which explored her past with the character of Pat Harris through flashbacks, in which she was played by Lorraine Stanley. The episode was broadcast to give the viewer "and understanding of, and history to [the] characters".[4] In the episode, the reason behind Pat and Mo's dislike for each other and was partly set in the 1950s. A show source said: "When the Slaters arrived in the square three years ago, Pat was horrified. Now the time has come for them to bury the hatchet - or at least try to."[5] Mo also appeared in the straight-to-video spin-off EastEnders: Slaters in Detention in 2003.

Mo has been described as "a very strong person [who] loves the family [and] wouldn't have anything said about them" by Morse.[1] She has been said to "hold the family together … [acting] as a surrogate mum to her granddaughters".[6] Her criminal activity has led to her being described as a "female Fagin or Del Boy"[7] and the "queen of knock-off".[8]