Route 4, also known as the Colonel Rodman Highway, is a 10.37-mile (16.69 km) long numbered state highway located in Washington County and southern Kent County, Rhode Island, United States. The route is a major north–south freeway in the southern Providence metropolitan area, directly linking Providence with eastern Washington County, the beaches of Narragansett and South Kingstown, and the city of Newport. Route 4 begins as a two-lane divided highway at an intersection with U.S. Route 1 (US 1) in the town of North Kingstown, becoming a limited-access freeway after 1.89 miles (3.04 km). The route has four numbered interchanges before terminating in the city of Warwick, where the northbound lanes merge into Interstate 95 (I-95).

The origins of Route 4 date back to 1952, when construction began on a short, unnumbered arterial from US 1 to the modern location of exit 5 at Routes 2 and 102 in Wickford. In 1965, the Rhode Island Department of Public Works began work on a 5.4-mile (8.7 km) freeway from modern exit 6 north to the merge with I-95. The freeway, designated as Route 4, was completed in 1972. At that time, the Route 4 designation was also applied to the Wickford arterial. In 1988, the missing link in Route 4 between exits 5 and 6 was completed and opened. The Rhode Island Department of Transportation has long-term plans to upgrade the southernmost portion of Route 4 to freeway status by constructing overpasses at Oak Hill Road and West Allenton Road and a grade separation with US 1. Although the project was originally scheduled to be completed by 2007, the $55 million project has been postponed indefinitely. 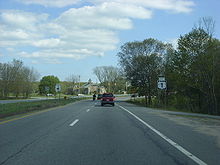 Route 4 begins at a fork in the alignment of U.S. Route 1 in the community of North Kingstown; the two left lanes of US 1 default onto Route 4 north, with the right-hand lane carrying Tower Hill Road and US 1 north into the village of Wickford. Route 4 heads in a northwestern direction as a four-lane divided highway, crossing West Allenton Road at an at-grade intersection with a traffic signal after approximately 0.5 miles (0.80 km).[1] The highway continues on a northwesterly projection, passing to the northeast of Kettle Hole Pond and to the southwest of Secret Lake in a heavily forested region. After Secret Lake, the highway curves to the north, crossing Oak Hill Road at another at-grade intersection.[2]

Shortly after the intersection with Oak Hill Road, Route 4 transitions from a divided arterial highway into a four-lane limited-access freeway. The freeway passes to the west of Belleville Pond and begins to parallel the alignment of Route 102 (Ten Rod Road) near the community of Lafayette.[1] Route 4 passes over Amtrak's Northeast Corridor railroad before entering the business district of Wickford Junction. The freeway interchanges with Routes 2 and 102 at exit 5, a partial cloverleaf interchange.[2] After the interchange, Route 4 bends to the northeast, beginning a parallel alignment with Route 2 that continues to its northern terminus. Route 4 crosses into the town of East Greenwich, passing under South Road before interchanging with Route 2 at exit 6, a partial cloverleaf interchange.[1] 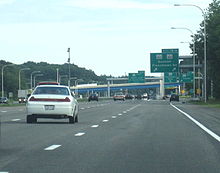 After exit 6, Route 4 passes the Rhode Island Army National Guard base to the east and to the Hunt River to the west. Route 4 northbound interchanges with Route 403 at exit 7; Route 403, or the Quonset Freeway, is a four-lane, limited access freeway and spur route of Route 4 that serves the Quonset Business Park and the village of Davisville. Heading southbound, exit 7 is split into exit 7B, which serves the Quonset Freeway, and exit 7A, which serves Route 402 (Frenchtown Road), another spur route connecting the highway to US 1 and Route 2.[3][4] After exit 7, Route 4 continues northward as a six-lane expressway, passing farmlands to the west and entering a suburban region of East Greenwich.[1] The highway crosses under an overpass at Middle Road before interchanging with Route 401, the freeway's final spur, at another partial cloverleaf interchange.[2] Exit 8 is also used to access Route 2 and I-95 south, which has no direct freeway connection with Route 4 north. Shortly after exit 8, the Route 4 designation ends and the mainline of the highway defaults onto I-95 north.[1] 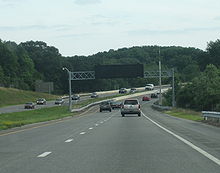 In 1950, the Rhode Island General Assembly passed a $12 million (equivalent to $109 million in 2011)[5] bond issue to fund the construction of a 3-mile (4.8 km), four-lane divided arterial bypass of U.S. Route 1 in Wickford. Construction on the highway began in 1952 and was completed in 1954, at which time the roadway opened as an unnumbered state highway leading from US 1 to Routes 2 and 102 in Wickford.[6]

During the late 1950s, a few years after the completion of the arterial, the Rhode Island Department of Public Works (RIDPW) proposed a relocation of Route 2, which, at the time, was the major thoroughfare in the area.[7] No action was taken until 1964, when the RIDPW introduced a study for the "Relocated Route 2" proposal.[8] During the study, drivers who used the Colonel Rodman Highway arterial and were bound for the state capital of Providence were redirected onto Route 2, an accident-prone, four-lane undivided highway near the modern exit 5. In 1965, the planned Route 2 freeway was given the new number of Route 4, leaving Route 2 on its existing alignment. A public hearing was held by the state of Rhode Island on the proposed freeway, which was to be four lanes and have a divided, grassy median. This proposal was later accepted, and construction began two years later.[9] Construction of a 5.4-mile (8.7 km) long section of Route 4 from what is now exit 6 in East Greenwich to I-95 in Warwick began in 1967 and was completed in 1972. That year, the 3-mile (4.8 km) arterial south of the modern exit 5 was also designated as part of Route 4. The divided highway remains largely intact to this date as the stretch of Route 4 from US 1 to Routes 2 and 102 at exit 5; the only piece of the arterial that has been significantly altered is the construction of a bridge over Amtrak's Northeast Corridor line.[10] By the early 1970s, Route 4 was complete north of exit 6 and south of what would become exit 5, but there was a still a missing piece in the highway between the two exits. In the 1970s, the state of Rhode Island faced several budget problems and environmental concerns, both of which delayed the construction of the missing link for nearly eleven years. Environmental studies on the missing link began in 1977, and the state estimated that the 1.5-mile (2.4 km) long section of freeway would cost $15–21 million (equivalent to $54–76 million in 2011)[5] to construct.[10] Construction began in 1983 and was completed five years later, causing problems for traffic and driver's paticence during the construction.[11] 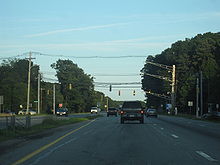 During the 1980s and 1990s, the Rhode Island Department of Transportation brought up plans to eliminate the four traffic lights along the southern end of the highway. They planned to remove the traffic light at U.S. Route 1 for an "extensive" overpass, which would cut-off access to three local roads that also come at the traffic light. With the proposal brought up at a meeting in North Kingstown, local residents cried foul. The plan also included replacing the other traffic light intersections with interchanges and overpasses that access Route 4 and local roads.[12] The Department of Transportation laid the highway out so that Route 4 would cross through wetlands in the area. Environmentalists once again cried foul, saying one of the two wetlands, Froberg's Marsh, was of high value. The Department of Transportation replied saying the only backup plan would be to leave Route 4 as was, and upgrade nearby Route 2 instead. The improvements of Route 2 however, would affect wells in the area. This was the only other way it could meet safe construction standards.[13] The project was originally slated to cost $24 million (1986 USD) to link Narragansett to Providence via a limited-access highway. This $24 million would come from an original $63 million plan for transportation construction.[14] In 1986, during excavation for the new right-of-way, the Department of Transportation found archeological items from the Narragansett Indians dating about 2,000 to 4,500 years prior. Although the findings were not centralized in the area, this caused problems for the extension of the new freeway.[15] On August 6, 1988, the Department of Transportation completed construction and performed a ribbon-cutting ceremony for the new highway. The event caused beach-bound traffic to be congested for miles as ceremony officials walked across the roadway, got into 20 antique cars and became the first drivers to ride the new alignment.[16] 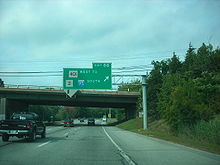 Southbound Route 4 at the interchange with Exit 8B in Warwick

In January 1990, two police cruisers were damaged during a police chase on Route 4. A Chevrolet Camaro was speeding up the highway to the Frenchtown Road interchange, where it got off and two unsuspecting officers wrecked trying to pursuit the vehicle. As a result from the crash, the American Civil Liberties Union began restarting calls to work on police chase policy so no officers would have to be injured in the line of duty.[17] In a study by the Department of Transportation during June 2003, the state recorded the mass running of red lights at the intersection with Oak Hill Road in North Kingstown. At the intersection, 967 people were recorded running the traffic light at either a left turn or heading straight across the light. Of those 967 people, 954 of them went straight across the traffic light, while only thirteen lone drivers violated a red light turning left onto Oak Hill. On the left turn violations, most occurred at least four seconds after the light changed to red. In comparison, most of the straight direction violations occurred when the traffic light was less than two seconds as red. As a result, 15.7% of drivers run a red light at the intersection with Oak Hill Road.[18]

In 2000, construction began on the Quonset Freeway, a relocated Route 403 that serves the Quonset Business Park from Route 4. The project included the reconstruction and reworking of exit 7 off Route 4, which was a southbound-only exit serving both Route 403 and Route 402 (Frenchtown Road) when constructed. The exit was converted into a trumpet interchange with new ramps between Route 4, Route 403 and Route 402 and was completed in December 2008, one year ahead of schedule.[19] The project included the construction of a new northbound exit 7 serving Route 403.[4]

The Rhode Island Department of Transportation (RIDOT) has laid out long-term plans for improvements to both the southern and northern termini of Route 4. Near the southern terminus, the state plans to construct overpasses at both Oak Hill Road and West Allenton Road to replace the existing at-grade intersections. The overpass for West Allenton Road is planned to be constructed as a new exit 4.[20] In the 1990s, the state purchased and demolished several houses in the region to allow for an expanded Route 4 right-of-way in the vicinity of West Allenton Road.[21] The long-term plan for the southern terminus also calls for the reconstruction of the US 1 and Route 4 merge, converting it into a grade-separated interchange to replace the existing, accident-ridden at-grade intersection. Although the project was originally scheduled to be completed by 2007, the $55 million project has been postponed indefinitely. RIDOT also has long-range plans to construct direct freeway connections linking Route 4 north with I-95 south and I-95 north with Route 4 south; however, no dates for construction have been announced.[20]