Gregor Johann Mendel (July 20, 1822[1] – January 6, 1884) was an Austrian[2] scientist and Augustinian friar who gained posthumous fame as the founder of the new science of genetics. Mendel demonstrated that the inheritance of certain traits in pea plants follows particular patterns, now referred to as the laws of Mendelian inheritance. Although the significance of Mendel's work was not recognized until the turn of the 20th century, the independent rediscovery of these laws formed the foundation of the modern science of genetics.[3]

Mendel was born into an ethnic German family in Heinzendorf bei Odrau, Austrian Silesia, Austrian Empire (now Hynčice, Czech Republic), and was baptized two days later as Johann. He was the son of Anton and Rosine (Schwirtlich) Mendel, and had one older sister (Veronica) and one younger (Theresia). They lived and worked on a farm which had been owned by the Mendel family for at least 130 years.[4] During his childhood, Mendel worked as a gardener, studied beekeeping, and as a young man attended Gymnasium (school) in Opava. From 1840 to 1843, he studied practical and theoretical philosophy as well as physics at the University of Olomouc Faculty of Philosophy, taking a year off through illness. When Mendel entered the Faculty of Philosophy, the Department of Natural History and Agriculture was headed by Johann Karl Nestler, who conducted extensive research of hereditary traits of plants and animals, especially sheep. In 1843 Mendel began his training as a priest. Upon recommendation of his physics teacher Friedrich Franz,[citation needed] he entered the Augustinian Abbey of St Thomas in Brno in 1843. Born Johann Mendel, he took the name Gregor upon entering religious life. In 1851 he was sent to the University of Vienna to study under the sponsorship of Abbot C. F. Napp. At Vienna, his professor of physics was Christian Doppler.[5] Mendel returned to his abbey in 1853 as a teacher, principally of physics, and by 1867, he had replaced Napp as abbot of the monastery.[6]

Besides his work on plant breeding while at St Thomas's Abbey, Mendel also bred bees in a bee house that was built for him, using bee hives that he designed.[7] He also studied astronomy and meteorology,[6] founding the 'Austrian Meteorological Society' in 1865.[5] The majority of his published works were related to meteorology.[5]

Gregor Mendel, who is known as the "father of modern genetics", was inspired by both his professors at the University of Olomouc (i.e. Friedrich Franz & Johann Karl Nestler) and his colleagues at the monastery (i.e. Franz Diebl) to study variation in plants, and he conducted his study in the monastery's two hectare[8] experimental garden, which was originally planted by Napp in 1830.[6] Between 1856 and 1863 Mendel cultivated and tested some 29,000 pea plants (i.e., Pisum sativum). This study showed that one in four pea plants had purebred recessive alleles, two out of four were hybrid and one out of four were purebred dominant. His experiments led him to make two generalizations, the Law of Segregation and the Law of Independent Assortment, which later became known as Mendel's Laws of Inheritance.

Mendel did read his paper, Versuche über Pflanzenhybriden (Experiments on Plant Hybridization), at two meetings of the Natural History Society of Brünn in Moravia in 1865. It was received favorably and generated reports in several local newspapers.[9] When Mendel's paper was published in 1866 in Verhandlungen des naturforschenden Vereins Brünn,[10] it was seen as essentially about hybridization rather than inheritance and had little impact and was cited about three times over the next thirty-five years. (Notably, Charles Darwin was unaware of Mendel's paper, according to Jacob Bronowski's The Ascent of Man.) His paper was criticized at the time, but is now considered a seminal work.

Life after the pea experiments

After completing his work with peas, Mendel turned to experimenting with honeybees to extend his work to animals. He produced a hybrid strain (so vicious they were destroyed), but failed to generate a clear picture of their heredity because of the difficulties in controlling mating behaviours of queen bees. He also described novel plant species, and these are denoted with the botanical author abbreviation "Mendel".

After he was elevated as abbot in 1868, his scientific work largely ended, as Mendel became consumed with his increased administrative responsibilities, especially a dispute with the civil government over their attempt to impose special taxes on religious institutions.[11] At first, Mendel's work was rejected and was not widely accepted until after he died. At that time most biologists held the idea of blending inheritance, and Charles Darwin's efforts to explain inheritance through a theory of pangenesis were unsuccessful. Mendel's ideas were rediscovered in the early twentieth century, and in the 1930s and 1940s the modern synthesis combined Mendelian genetics with Darwin's theory of natural selection.

Mendel died on January 6, 1884, at age 61, in Brno, Moravia, Austria-Hungary (now Czech Republic), from chronic nephritis. Czech composer Leoš Janáček played the organ at his funeral. After his death, the succeeding abbot burned all papers in Mendel's collection, to mark an end to the disputes over taxation.[12] 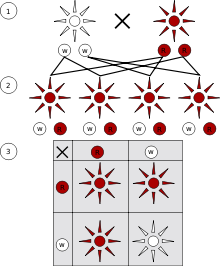 It was not until the early 20th century that the importance of his ideas was realized. By 1900, research aimed at finding a successful theory of discontinuous inheritance rather than blending inheritance led to independent duplication of his work by Hugo de Vries and Carl Correns, and the rediscovery of Mendel's writings and laws. Both acknowledged Mendel's priority, and it is thought probable that de Vries did not understand the results he had found until after reading Mendel.[3] Though Erich von Tschermak was originally also credited with rediscovery, this is no longer accepted because he did not understand Mendel's laws.[13] Though de Vries later lost interest in Mendelism, other biologists started to establish genetics as a science.[3]

Mendel's results were quickly replicated, and genetic linkage quickly worked out. Biologists flocked to the theory; even though it was not yet applicable to many phenomena, it sought to give a genotypic understanding of heredity which they felt was lacking in previous studies of heredity which focused on phenotypic approaches. Most prominent of these latter approaches was the biometric school of Karl Pearson and W.F.R. Weldon, which was based heavily on statistical studies of phenotype variation. The strongest opposition to this school came from William Bateson, who perhaps did the most in the early days of publicising the benefits of Mendel's theory (the word "genetics", and much of the discipline's other terminology, originated with Bateson). This debate between the biometricians and the Mendelians was extremely vigorous in the first two decades of the twentieth century, with the biometricians claiming statistical and mathematical rigor, whereas the Mendelians claimed a better understanding of biology. In the end, the two approaches were combined as the modern synthesis of evolutionary biology, especially by work conducted by R. A. Fisher as early as 1918.

Mendel's experimental results have later been the object of considerable dispute.[12] Fisher analyzed the results of the F2 (second filial) ratio and found them to be implausibly close to the exact ratio of 3 to 1.[14] Only a few would accuse Mendel of scientific malpractice or call it a scientific fraud—reproduction of his experiments has demonstrated the validity of his hypothesis—however, the results have continued to be a mystery for many, though it is often cited as an example of confirmation bias. This might arise if he detected an approximate 3 to 1 ratio early in his experiments with a small sample size, and continued collecting more data until the results conformed more nearly to an exact ratio. It is sometimes suggested that he may have censored his results, and that his seven traits each occur on a separate chromosome pair, an extremely unlikely occurrence if they were chosen at random. In fact, the genes Mendel studied occurred in only four linkage groups, and only one gene pair (out of 21 possible) is close enough to show deviation from independent assortment; this is not a pair that Mendel studied. Some recent researchers have suggested that Fisher's criticisms of Mendel's work may have been exaggerated.[15][16]