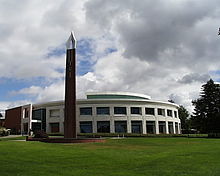 Chime Tower at Clark College, with the Cannell Library behind.

Clark College is a community college located in Vancouver, Washington.

The college, which celebrated its 75th anniversary on October 1, 2008, was founded as a private, two-year, junior college in 1933. Originally known as Vancouver Junior College, the college was located at the old Hidden House at 100 W 13th Street in downtown Vancouver from 1933-1937, moving several times within the city. The main campus was formerly part of the Vancouver Barracks, which extended from Fourth Plain to the Columbia River but were ceded by the U.S. Army to the city to become Central Park. In 1951 the Applied Arts Center became its first building at the current location (its sixth), when the college first offered evening classes. After the Kaiser Shipyards boom of World War II, Clark College rapidly grew to meet the educational needs of the expanded population, the 1944 Serviceman's Readjustment Act and the baby boom.

The school is currently headed by President Bob Knight, a former commander of the Vancouver Barracks and graduate of West Point who also holds an Executive MBA from Golden Gate University. [1]

The college first received state support in 1941, being supervised by the State Board of Education in 1946 with the Vancouver School Board serving as its policy-making body until it was reorganized as a public institution in 1958 and incorporated into the statewide community college system in 1967. 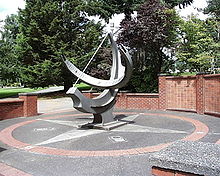 Sun dial near the science buildings.

The college's main campus sits on an 101 acre (0.409 km²) site in Vancouver's Central Park, southwest of Water Works Park and north of Hudson's Bay High School. The college's signature carillon Chime Tower was designed by Richard Stensrude, begun in 1964, and incorporates materials from the local Hidden Brick Company and the nearby Alcoa plant. The main campus has generally expanded from the southeast northward and other structures include an equatorial bow-style sun dial near the science buildings. As part of the college's 75th anniversary celebration, the sundial was refurbished to provide more accurate time.

In addition to providing a variety of associate degrees, general adult education and preparation for four-year university degrees, Clark College has programs in nursing, dental hygiene and industrial arts such as welding and auto maintenance. New programs including medical radiography have expanded the college curriculum.

Clark College's mascot is a Galapagon penguin named Oswald. He appears at many college events and is acknowledged through the college's Healthy Penguin Nation and Sustainable Penguin Nation initiatives.

Clark's Board of Trustees is led by Rhona Sen Hoss. In 2009, fall enrollment reached a record as the college welcomed more than 16,000 students (full and part-time). Clark now has more than 1,600 Running Start students, making it the largest "Running Start" [2] program in the state. 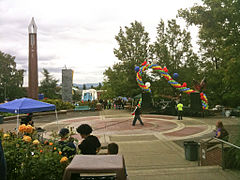 More than 50 chartered student clubs offer a wide array of opportunities for personal growth, development and enjoyment. A student newspaper, The Independent, covers college news. Phoenix is the student literary and art magazine. Students on campus are represented by the Associated Students of Clark College (ASCC).