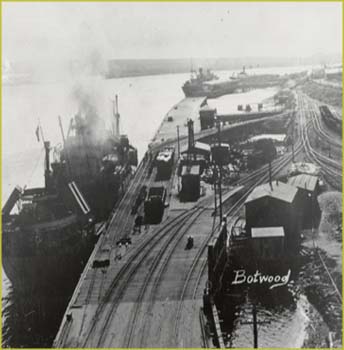 In 1908 construction began on the Botwood Railway, running between Grand Falls and Botwood. It was a joint effort between the A.N.D. Company and the A. E. Reed Company of Bishop's Falls. It was to be the transportation link for the export of pulp and paper from the newly built mill at Grand Falls. The railway became operational by the fall of 1909, and the first shipment of paper from the new mill was sent in February of 1910. The A.N.D. Company took control of the railway operation in 1910, just a year after the line was completed.

The first aircraft facilities to be established in Botwood was by Newfoundland born Captain (1897 - 1945) and Australian-born Major (1894 - 1969). It became host to many dignitaries and celebrities, some as part of official delegations and others who were stalled there waiting out inclement flying weather. Among those were and his wife in 1933. Both and overnighted at Botwood. and his troupe were stormbound there in 1943 and performed for the RCAF Coastal Command.

From 1937 to 1945, both and the used Botwood as a terminal for their Atlantic Crossings. On , the "Yankee Clipper" left Botwood for the first Trans-Atlantic Passenger flight to , .

From the outbreak of , 1940-1945, the changed Botwood into a patrolling and bombing base, home to two squadrons of PBY Canso flying boats equipped with torpedoes and depth charges. A large concrete , two s, a and four were constructed. The Canadian Army was garrisoned in the town, the army built barracks, a water system, and a full scale military hospital. The army was responsible for the manning of gun batteries at Philip's Head and Wiseman's Cove that protected the entrance to Botwood Harbor with 14" guns, as well as numerous anti-aircraft batteries throughout the community. At the war's end Botwood had been home to some 10,000 Canadian and British personnel and had become Canada's most important over-seas base.

In 1942, 11 United States military personnel died when their flying boat, the "", crashed and sank in the Bay of Exploits shortly after takeoff from Botwood.