Convention on the Elimination of All Forms of Discrimination Against Women

Convention on the Elimination of All Forms of Discrimination Against Women

Participation in the CEDAW 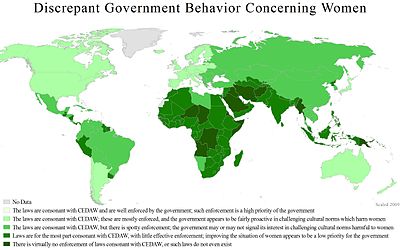 The Convention on the Elimination of all Forms of Discrimination against Women (CEDAW) is an international convention adopted in 1979 by the United Nations General Assembly. Described as an international bill of rights for women, it came into force on 3 September 1981. The United States is the only developed nation that has not ratified the CEDAW. Several countries have ratified the Convention subject to certain declarations, reservations, and objections.[1]

The Convention defines discrimination against women in the following terms:

Any distinction, exclusion or restriction made on the basis of sex which has the effect or purpose of impairing or nullifying the recognition, enjoyment or exercise by women, irrespective of their marital status, on a basis of equality of men and women, of human rights and fundamental freedoms in the political, economic, social, cultural, civil or any other field.

It also establishes an agenda of action for putting an end to sex-based discrimination:

States must take measures to seek to eliminate prejudices and customs based on the idea of the inferiority or the superiority of one sex or on stereotyped role for men and women.

States ratifying the Convention are required to enshrine gender equality into their domestic legislation, repeal all discriminatory provisions in their laws, and enact new provisions to guard against discrimination against women. However, special protection for maternity is not regarded as gender discrimination (Article 4). Appropriate measures, including legislation, to suppress all forms of trafficking in women and forced prostitution are also not regarded as gender discrimination (Article 6). Equal opportunity in education for female students is required, and coeducation is encouraged. (Article 10). States ratifying the Convention must also establish tribunals and public institutions to guarantee women effective protection against discrimination, and take steps to eliminate all forms of discrimination practiced against women by individuals, organizations, and enterprises (Article 2,(e)).

Main article: List of parties to the Convention on the Elimination of All Forms of Discrimination Against Women

The seven UN member states that have not ratified or acceded to the convention are Iran, Palau, Somalia, Sudan, South Sudan, Tonga, and the United States. The United States and Palau have signed it, but not yet ratified it.[2]

The one UN non-member state that had not acceded to the convention is the Holy See/Vatican City.[2][3]

The Republic of China (Taiwan) in 2007 has also ratified the treaty in its legislature, but is unrecognized by the United Nations and is a party to the treaty only unofficially.[4]

Committee on the Elimination of Discrimination against Women

Convention oversight is the task of the Committee on the Elimination of Discrimination against Women, which is made up of 23 experts on women's issues from different UN member states. The Committee meets twice a year to review reports on compliance with the Convention's provisions that the signatory nations are required to submit every four years.

The Committee is one of the eight UN-related human rights treaty bodies.

The Committee's members, described as "experts of high moral standing and competence in the field covered by the Convention", are elected to serve four-year terms in staggered elections held every two years. Its officers are a chairperson, three vice-chairpersons, and a rapporteur. Efforts are made to ensure balanced geographical representation and the inclusion of the world's different forms of civilization and legal systems.

Committee members and experts also attend an annual luncheon, hosted by the NGO Committee on the Status of Women, NY (NGO CSW/NY), where key issues are discusses and the efforts of the committee are honored.[5]

The Optional Protocol was adopted by the UN General Assembly on 6 October 1999 and entered into force on 22 December 2000.[7] Currently it has 79 signatories and 103 parties.[8]

The CEDAW has been controversial for statements seen by a number of states and NGOs as promoting Western-style radical feminism. Often referenced is a 2000 report which said that in Belarus, "the Committee is concerned by the continuing prevalence of sex-role stereotypes and by the reintroduction of such symbols as a Mothers' Day and a Mothers' Award, which it sees as encouraging women's traditional roles."[10] Other controversial positions of CEDAW include supporting the decriminalization of prostitution in specific countries, criticizing Slovenia because only 30% of children are in daycare, and pressuring numerous states to decriminalize abortion.[11] Other requests are seen by groups as a backdoor to forcing states parties to adopt an Equal Rights Amendment or comparable national legislation, which is seen as a violation of the CEDAW treaty mandate and the sovereignty of states parties.[12] Australian and (defunct) New Zealand anti-feminist groups[weasel words] voiced similar concerns in the early eighties.

More recently, the controversy concerning CEDAW has centered around the question of easy access to abortion and contraception. According to C-FAM (the Catholic Family and Human Rights Institute), at UN meetings officials pressed the delegation from Colombia to liberalize its abortion laws and to inaugurate campaigns encouraging contraceptive use and "reproductive health awareness".[13]