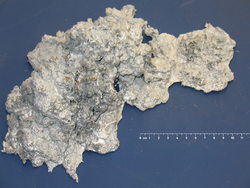 Dross is a mass of solid impurities floating on a molten metal. It appears usually on the melting of low-melting-point metals or alloys such as tin, lead, zinc or aluminium, or by oxidation of the metal(s). It can also consist of impurities such as paint leftovers. It can easily be skimmed off the surface before pouring the metal into a mold or casting flask.

With tin and lead the dross can also be removed by adding sodium hydroxide pellets, which dissolve the oxides and form a slag.

Dross, as a solid, is distinguished from slag, which is a liquid. Dross product is not entirely waste material; aluminium dross, for example, can be recycled and is used in secondary steelmaking for slag deoxidation.[1]

The term dross derives from the Old English word dros, meaning the scum produced when smelting metals. By the 15th Century it had come to refer to rubbish in general.[2] Dregs[2] and the geological term druse are also thought to be etymologically related.[3] Metallurgical dross is referenced as a metaphor for worthless material in the Bible and in other religious texts.[note 1]