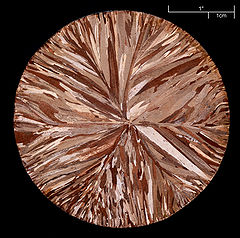 Continuous casting, also called strand casting, is the process whereby molten metal is solidified into a "semifinished" billet, bloom, or slab for subsequent rolling in the finishing mills. Prior to the introduction of continuous casting in the 1950s, steel was poured into stationary molds to form ingots. Since then, "continuous casting" has evolved to achieve improved yield, quality, productivity and cost efficiency. It allows lower-cost production of metal sections with better quality, due to the inherently lower costs of continuous, standardised production of a product, as well as providing increased control over the process through automation. This process is used most frequently to cast steel (in terms of tonnage cast). Aluminium and copper are also continuously cast.

Sir Henry Bessemer, of Bessemer converter fame, received a patent in 1857 for casting metal between two contra-rotating rollers. The basic outline of this system has recently been implemented today in the casting of steel strip. 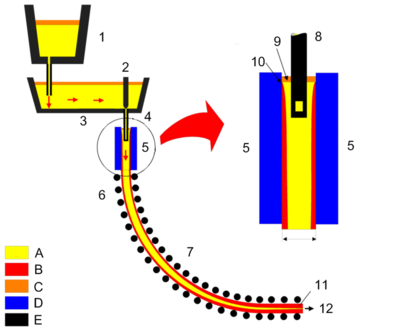 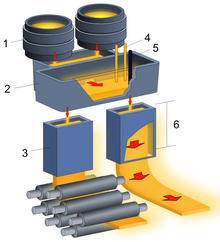 From the ladle, the hot metal is transferred via a refractory shroud (pipe) to a holding bath called a tundish. The tundish allows a reservoir of metal to feed the casting machine while ladles are switched, thus acting as a buffer of hot metal, as well as smoothing out flow, regulating metal feed to the molds and cleaning the metal (see below).

Metal is drained from the tundish through another shroud into the top of an open-base copper mold. The depth of the mold can range from 0.5 to 2 metres (20 to 79 in), depending on the casting speed and section size. The mold is water-cooled to solidify the hot metal directly in contact with it; this is the primary cooling process. It also oscillates vertically (or in a near vertical curved path) to prevent the metal sticking to the mold walls. A lubricant can also be added to the metal in the mold to prevent sticking, and to trap any slag particles—including oxide particles or scale—that may be present in the metal and bring them to the top of the pool to form a floating layer of slag. Often, the shroud is set so the hot metal exits it below the surface of the slag layer in the mold and is thus called a submerged entry nozzle (SEN). In some cases, shrouds may not be used between tundish and mold; in this case, interchangeable metering nozzles in the base of the tundish direct the metal into the moulds. Some continuous casting layouts feed several molds from the same tundish.

In the mold, a thin shell of metal next to the mold walls solidifies before the middle section, now called a strand, exits the base of the mold into a spray chamber. The bulk of metal within the walls of the strand is still molten. The strand is immediately supported by closely spaced, water cooled rollers which support the walls of the strand against the ferrostatic pressure (compare hydrostatic pressure) of the still-solidifying liquid within the strand. To increase the rate of solidification, the strand is sprayed with large amounts of water as it passes through the spray-chamber; this is the secondary cooling process. Final solidification of the strand may take place after the strand has exited the spray-chamber.

In a true "Horizontal Casting Machine", the mold axis is horizontal and the flow of steel is horizontal from liquid to thin shell to solid (no bending). In this type of machine, either strand oscillation or mold oscillation is used to prevent sticking in the mold.

After exiting the spray-chamber, the strand passes through straightening rolls (if cast on other than a vertical machine) and withdrawal rolls. There may be a hot rolling stand after withdrawal to take advantage of the metal's hot condition to pre-shape the final strand. Finally, the strand is cut into predetermined lengths by mechanical shears or by travelling oxyacetylene torches, is marked for identification and either taken to a stockpile or the next forming process.

In many cases the strand may continue through additional rollers and other mechanisms which might flatten, roll or extrude the metal into its final shape.

Casting machines for aluminium and copper

Aluminium and copper can be cast horizontally and can be more easily cast into near net shape, especially strip, due to their lower melting temperatures.

Startup, control of the process and problems

Starting a continuous casting machine involves placing a dummy bar (essentially a curved metal beam) up through the spray chamber to close off the base of the mould. Metal is poured into the mould and withdrawn with the dummy bar once it solidifies. It is extremely important that the metal supply afterwards be guaranteed to avoid unnecessary shutdowns and restarts, known as 'turnarounds'. Each time the caster stops and restarts, a new tundish is required, as any uncast metal in the tundish cannot be drained and instead freezes into a 'skull'. Avoiding turnarounds requires the meltshop, including ladle furnaces (if any) to keep tight control on the temperature of the metal, which can vary dramatically with alloying additions, slag cover and deslagging, and the preheating of the ladle before it accepts metal, among other parameters. However, the cast rate may be lowered by reducing the amount of metal in the tundish (although this can increase wear on the tundish), or if the caster has multiple strands, one or more strands may be shut down to accommodate upstream delays. Turnarounds may be scheduled into a production sequence if the tundish temperature becomes too high after a certain number of heats.

Many continuous casting operations are now fully computer-controlled. Several electromagnetic and thermal sensors in the ladle shroud, tundish and mould sense the metal level or weight, flow rate and temperature of the hot metal, and the programmable logic controller (PLC) can set the rate of strand withdrawal via speed control of the withdrawal rolls. The flow of metal into the moulds can be controlled via two methods:

Overall casting speed can be adjusted by altering the amount of metal in the tundish, via the ladle slide gate. The PLC can also set the mould oscillation rate and the rate of mould powder feed, as well as the spray water flow. Computer control also allows vital casting data to be repeated to other manufacturing centres (particularly the steelmaking furnaces), allowing their work rates to be adjusted to avoid 'overflow' or 'underrun' of product.

While the large amount of automation helps produce castings with no shrinkage and little segregation, continuous casting is of no use if the metal is not clean beforehand, or becomes 'dirty' during the casting process. One of the main methods through which hot metal may become dirty is by oxidation, which occurs rapidly at molten metal temperatures (up to 1700 °C); inclusions of gas, slag or undissolved alloys may also be present. To prevent oxidation, the metal is isolated from the atmosphere as much as possible. To achieve this, exposed metal surfaces are covered – by the shrouds, or in the case of the ladle, tundish and mould, by synthetic slag. In the tundish, any inclusions – gas bubbles, other slag or oxides, or undissolved alloys – may also be trapped in the slag layer.

A major problem that may occur in continuous casting is breakout. This is when the thin shell of the strand breaks, allowing the still-molten metal inside the strand to spill out and foul the machine, requiring a turnaround. Often, breakout is due to too high a withdrawal rate, as the shell has not had the time to solidify to the required thickness, or the metal is too hot, which means that final solidification takes place well below the straightening rolls and the strand breaks due to stresses applied during straightening. A breakout can also occur if solidifying steel sticks to the mould surface, causing a tear in the shell of the strand. If the incoming metal is overheated, it is preferable to stop the caster than to risk a breakout. Additionally, lead contamination of the metal (caused by counterweights or lead-acid batteries in the initial steel charge) can form a thin film between the mould wall and the steel, inhibiting heat removal and shell growth and increasing the risk of breakouts.

Another problem that may occur is a carbon boil – oxygen dissolved in the steel reacts with also-present carbon to generate bubbles of carbon monoxide. As the term boil suggests, this reaction is extremely fast and violent, generating large amounts of hot gas, and is especially dangerous if it occurs in the confined spaces of a casting machine. Oxygen can be removed through the addition of silicon or aluminium to the steel, which reacts to form silicon oxide (silica) or aluminium oxide (alumina). However, too much alumina in the steel will clog the casting nozzles and cause the steel to 'choke off'.

Computational fluid dynamics and other fluid flow techniques are being used extensively in the design of new continuous casting operations, especially in the tundish, to ensure that inclusions and turbulence are removed from the hot metal, yet ensure that all the metal reaches the mould before it cools too much. Slight adjustments to the flow conditions within the tundish or the mould can mean the difference between high and low rejection rates of the product.

The starter bar has a free end portion which is flexible for storage and a substantially rigid portion at the end which plugs the mold. The starter bar is constructed in discrete blocks secured to one side of a planar spine provided in segments and arranged end to end. Adjustable spacers in the form of tapered blocks are disposed between the blocks of the bar to allow the starter bar to be self-supporting in a curved configuration corresponding to the casting path. A more flexible spine in the end portion of the starter bar allows the starter bar to be curved to a tighter radius than that of the casting path while the blocks fan out in an unsupported configuration. A storage ramp is provided to support the flexible end in the stored position.

Direct strip casting is a continuous casting process for producing metallic sheet directly from the molten state that minimises the need for substantial secondary processing.