Downeaster
This article is about the passenger train. For the sailing vessel, see Down East Yachts.

The Downeaster is a 116-mile (187 km) regional passenger train service managed by the Northern New England Passenger Rail Authority (NNEPRA) and operated by Amtrak, connecting North Station in Boston, Massachusetts, to Portland, Maine. With five daily round trips, the route carries 500,000 passengers annually, and was Amtrak's fastest-growing service in fiscal years 2006 and 2008. 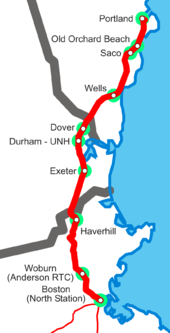 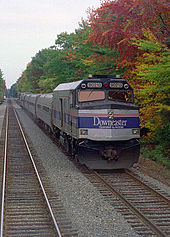 A southbound Downeaster train at Ocean Park, Maine, as viewed from the cab of a northbound train.

The Downeaster uses the MBTA’s Lowell Line from North Station to Wilmington, the Wildcat Branch to Wilmington Junction, and the Haverhill/Reading Line to the Massachusetts-New Hampshire state line. From there to Portland, it uses the Pan Am Railways Freight Main Line. All of these lines were once part of the Boston and Maine Railroad; the part south of Wilmington Junction was once the mainline and a branch of the Boston and Lowell Railroad, and the rest was the mainline of the B&M.

From Portland to Bangor, Concord Coach Lines operates Thruway Motorcoach service, scheduled to connect to the Downeaster, and treated as one continuous route for ticketing purposes. Some Thruway buses run from Portland to South Station, making a direct connection with Amtrak's other services.[2]

The Downeaster offers two classes of service — Reserved Coach and Business Class — as well as a café car. All seats have electrical outlets. Free Wi-Fi (wireless internet) is available to passengers on all Downeaster trains.[3]

The Downeaster also has a "train host" program, coordinated by Trainriders Northeast. Train hosts, available on some trains, are volunteers who provide passengers with information on destinations, attractions, and transfers.[3][4]

The route of the Downeaster is similar to the route historically used by the Pine Tree, which was a joint Boston & Maine / Maine Central train from Boston to Bangor. The primary difference is that a motorcoach (bus) carries passengers for the Portland-Bangor leg of the trip.

North Station in Boston serves the most passengers on the Downeaster route. The Portland Transportation Center is Maine's busiest station, and Exeter has the most boardings and detrainings in New Hampshire.

A southbound Downeaster at Rigby Yard in South Portland, Maine.

The Downeaster is managed by the Northern New England Passenger Rail Authority and operated by Amtrak.[9] As of December 2007, operating the Downeaster costs $13.5 million per year, of which $6 million is covered by fares paid by passengers. The federal government provides $6 million per year through 2008, and Maine $1.5 million per year; after that, Maine will have to take over paying the entire shortfall if service is to continue. Massachusetts and New Hampshire do not contribute directly to the Downeaster's operational budget even though the train stops in those states.[10]

Video of the Downeaster passing through Scarborough, Maine.

An expansion project currently underway will add passenger train service along Maine's Atlantic coastline from Portland to Brunswick. A study by the Chicago-based Center for Neighborhood Technology suggests that the extension, combined with commercial developments along the "Downeaster Corridor," could generate several billion dollars in construction investments plus $55 million annually in tax revenue for the state of Maine.[11]

Ground was broken for the Brunswick station on October 18, 2008. This project is a retail development centered around a new train station with future service south on the Downeaster, and north to Rockland on Maine Eastern Railroad. It will include shops, condominiums, and office space.

On January 28, 2010, the Northern New England Passenger Rail Authority received approval for a $35 million grant from the federal government to fund track and signal upgrades for the Portland-Brunswick line.[12] Pan Am Railways began work on the line in summer 2010. NNEPRA hopes to have passenger rail service to Brunswick by 2012.[13][14]