The Command key, also historically known as the Apple key, open-Apple key or meta key is a modifier key present on Apple Keyboards. The Command key's purpose is to allow the user to enter keyboard shortcut commands to GUI applications. An "extended" Macintosh keyboard—the most common type—has two command keys, one on each side of the space bar; some compact keyboards have one only on the left. The Bowen knot symbol was chosen after Steve Jobs decided that the use of the Apple logo in the menu system (where the keyboard shortcuts are displayed) would be an over-use of the logo.

Apple's computers up through the 1979 Apple II Plus did not have a command key. The first model on which it appeared was the 1980 Apple III, where there are two Apple keys, both to the left of the space bar on the lowest row of the keyboard. Two other early Apple computers, the 1982 Apple IIe and the 1984 Apple IIc, also had two such keys, one to the left and one to the right of the space bar; in these models, they mapped to the first two fire buttons of an attached joystick. This allowed for flexible combinations of a modifier key and base key (such as Open-Apple with C for Copy) with just a few extra wires and no ROM changes, since the Apple II could only register one key press at a time (Shift and Control keys were handled in the keyboard encoding hardware which generated ASCII codes). In all these cases, the left Apple key had an outlined "open" Apple logo, and the one on the right had an opaque, "closed" or "solid" Apple logo key. The Apple Lisa had only the closed Apple logo. When the Macintosh was introduced in 1984, the keyboard had a single command key with a Saint John's Arms (also called a four leaf clover) symbol (⌘, U+2318), because Steve Jobs said that showing the Apple logo throughout the menus as a keyboard shortcut was "taking [it] in vain."[1] Thus, the ⌘ appears in the Macintosh menus as the primary modifier key symbol.

In 1986, the Apple IIGS was introduced. Like the newer Macintosh computers to come, such as the Macintosh SE, it used the new Apple Desktop Bus for its keyboard and mouse. However, it was still an Apple II. Apple changed the keys on the IIGS's keyboard to Command and Option, as on Mac keyboards, but added an open-Apple to the Command key, for consistency with applications for previous Apple II generations. (The Option key did not have a closed-Apple, probably because Apple II applications used the closed-Apple key much more rarely than the open-Apple key; thus there was less need to keep it around.) Because any ADB keyboard could be used with the IIGS, all of Apple's ADB keyboards—even those intended for the Mac—also required the open-Apple, and it stuck for more than twenty years, causing confusion long after the Apple II series went out of production.

The Apple symbol was removed in the keyboard's 2007 redesign, making room for the key's name to appear. In the US, the keyboard now uses the word "command"; in Europe, the word used now is "cmd" printed on the key.

The Command key has a single purpose: allowing the user to enter keyboard shortcut commands to GUI applications. The Macintosh Human Interface Guidelines have always recommended that developers use the Command key (and not the Control or Option keys) for this purpose. A small set of shortcuts (such as cut and paste, open and save) are standard across nearly all applications, and many other shortcuts are standardized (Find, Show Fonts). If an application needs more shortcuts than can be obtained with the twenty-six letters of the Latin alphabet, double modifiers such as Command+Option are used.

One advantage of this scheme, as contrasted with the Microsoft Windows mixed use of the Control and Alt keys, is that the Control key is reserved entirely for its original purpose: entering control characters in terminal applications. (Indeed, the very first Macintosh lacked a Control key; it was soon added to allow compatible terminal software.)

The Macintosh keyboard's other unusual modifier key, the Option key, serves as a modifier both for entering keyboard shortcuts and for typing text—it is used to enter foreign characters, typographical symbols, and other nonstandard characters.

The origin of "⌘" 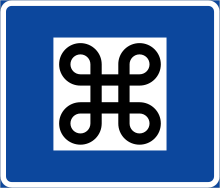 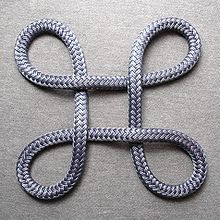 The ⌘ came into the Macintosh project at a late stage. The development team originally went for their old Apple key, but Steve Jobs found it frustrating when "apples" filled up the Mac's menus next to the key commands, because he felt that this was an over-use of the company logo.[1] He then opted for a different key symbol. With only a few days left before deadline, the team's bitmap artist Susan Kare started researching for the Apple logo's successor. She was browsing through a symbol dictionary when she came across the cloverleaf-like symbol, commonly used in Scandinavia as an indicator of cultural locations and places of interest (it's the official road sign for Tourist attraction – Sevärdhet – in Sweden,[2] and the computer key has often been called Fornminne – Ancient monument – by Swedish Mac users[3] and Seværdighedstegn by Danish users). When she showed it to the rest of the team, everyone liked it, and so it became the symbol of the 1984 Macintosh command key.[4]

The "⌘" symbol, known as a Gorgon loop, Saint John's Arms or sometimes referred to as Saint Hannes cross, dates back to pre-Christian times.

The symbol was included in the original Macintosh font Chicago, and could be inserted by typing a control-q key combination.[5]

When used in conjunction with computing the symbol is commonly given nicknames such as "quadfinity", '"cloverleaf", "splat", "splodge", "overpass", "butterfly", "squiggle", "beanie", "flower", "cauliflower", "curly-do", "propeller", "pretzel", "rugbeater" or "shamrock". Sometimes when used in conjunction with a Hot Key it is called "twiddle". Some believe the symbol should be named the "infinite loop", which is also the address for Apple world headquarters: 1 Infinite Loop, Cupertino, CA 95014. In Unicode it is at code point U+2318 and is called "PLACE OF INTEREST SIGN".[6] [7] [8]

Conversely, if an Apple USB keyboard is connected to a PC running Windows, the system assumes the command keys are the Windows keys and assigns them as such. Under some Linux distributions, such as Red Hat and its derivatives, the left command key performs the function of the Meta key and the right one the Compose key.