Monkey Business is a 1931 comedy film.[1][2] It is the third of the Marx Brothers' released movies, and the first not to be an adaptation of one of their Broadway shows. The film stars the four brothers: Groucho Marx, Chico Marx, Harpo Marx, and Zeppo Marx, and screen comedienne Thelma Todd. It is directed by Norman Z. McLeod with screenplay by S. J. Perelman and Will B. Johnstone. The story takes place in large part on an ocean liner crossing the Atlantic Ocean.

While stowing away on a ship to America, four brothers get involuntarily pressed into service as toughs for a pair of feuding gangsters while trying desperately to evade the ship's crew.[3] After arriving stateside one of the gangsters kidnaps the other's daughter, leaving it up to the brothers to save the day.[4]

Two famous scenes include all four brothers trying to sneak through a passenger checkpoint by pretending to be Maurice Chevalier, and Harpo's attempt to hide from the authorities by posing as a puppet in a Punch and Judy children's show.[5]

The film features a fight scene at the end in which Groucho acts as a commentator. 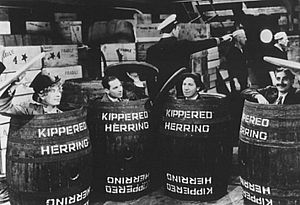 The four Marx Brothers stowing away on an ocean vessel by hiding in barrels in this promotional still for Monkey Business. Left to right: Harpo, Zeppo, Chico, Groucho.

Typical for many Marx Brothers films, production censors demanded changes in some lines with sexual innuendo.[6] Monkey Business was banned in some countries outside of the U.S.A, because censors feared it would encourage anarchic tendencies.

This is the first Marx Brothers film not to feature Margaret Dumont: this time their female foil is comedienne Thelma Todd, who would also go on to star in the Marx Brothers' next film, Horse Feathers. (Supposedly, Todd burst into tears when she was told she would be working with the Marxes.[citation needed]) A few years after the release of Horse Feathers, Todd died in unexplained circumstances. A line of dialogue in Monkey Business coincidentally seems to foreshadow Todd's death. Alone with Todd in her cabin, Groucho Marx quips: "You're a woman who's been getting nothing but dirty breaks. Well, we can clean and tighten your brakes, but you'll have to stay in the garage all night." In 1935, Todd died in her car inside a garage, apparently from accidental carbon monoxide poisoning.[7]

Early on in Monkey Business, the Brothers—playing stowaways concealed in barrels—harmonize unseen while performing the popular song "Sweet Adeline". It is a matter of debate whether Harpo joins in with the singing. (One of the ship's crew asserts to the captain that he knows there are four stowaways because he can hear them singing "Sweet Adeline".) If so, it would be one of only a few times Harpo used speech on screen, as opposed to other vocalizations such as whistling or sneezing. At least one other possible on-screen utterance occurs in the film A Day at the Races (1937), in which Groucho, Chico, and Harpo are heard singing "Down by the Old Mill Stream" in three-part harmony.

This was the first Marx film to be filmed in Hollywood. Their first two films were filmed at Paramount Pictures' Astoria Studios in Queens, New York.

Upon alighting from the ship, the Marx Brothers' real life father (Sam "Frenchie" Marx) is briefly seen in a cameo appearance, sitting on top of luggage behind the Brothers on the pier as they wave to the First Mate.

Chico performs two pieces on the piano, the Pizzicato from Sylvia by Léo Delibes, which then morphs into the song "When I Take My Sugar to Tea" written by Sammy Fain, Irving Kahal and Pierre Norman, in his usual, unique style. Harpo performs "I'm Daffy Over You" by Sol Violinsky and Chico. The most famous sequence from this film involves the four brothers attempting to get off the ship using a passport stolen from famous singer (and fellow Paramount star) Maurice Chevalier. Each brother impersonates Chevalier (complete with straw hat) and sings "You Brought a New Kind of Love to Me" ("If a nightingale could sing like you ...") in turn. This poses a problem for Harpo, who never talks. Yet his rendition is nearly flawless. He is using a hidden phonograph playing a Chevalier record. When the turntable slows down and he has to rewind it, the ruse is uncovered.

According to TCM's Robert Osborne, a sequel was planned for this film that would continue the mafia theme. However, during the planning stages for this next proposed film, famous aviator Charles Lindbergh's son was kidnapped and killed by gang members. The writers quickly shifted gears, and based the Brothers' next film very loosely on the Marx Brothers' earlier stage show Fun in Hi Skule,[8] which would eventually evolve into Horse Feathers.[9]

Monkey Business was a phenomenal success,[7] and is considered one of the Marx Brothers' greatest works.[10] The film was evidently based around two early routines the Marx Brothers did during their early days in vaudeville (Home Again and Mr. Green's Reception), along with a story idea from one of Groucho's friends, Bert Granet, called The Seas Are Wet.[7][9] The passport scene is a reworking of a stage sketch in which the brothers burst into a theatrical agent's office auditioning an impersonation of a current big star. It appeared in their stage shows On the Mezzanine Floor and I'll Say She Is (1924). This skit was also done by the Marxes in the Paramount promotional film The House That Shadows Built (1931).

The concept of the Marx Brothers being stowaways on a ship would be repeated in an episode of their 1933 radio series Flywheel, Shyster, and Flywheel in the episode "The False Roderick" and would also be recycled in their later MGM film A Night at the Opera (1935).[11] Also, the essence of Groucho's joke, "Sure, I'm a doctor—where's the horse?" would serve as an integral element for their later MGM movie A Day at the Races (1937). Also, the uproarious medical examination that Harpo and Chico give opera singer Madame Swempski (Cecil Cunningham) would later be repeated in A Day at the Races.