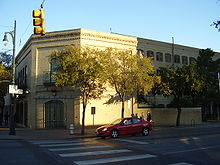 The voters of Texas approved an amendment to the Texas Constitution in November 1991 authorizing lottery sales in Texas.[2]

The Texas Lottery Commission created an unusual contest for the Lottery logo – designs from a contracted ad agency were pitted against designs from the general public. One logo from each source was placed in head to head competition, and the winning logo – a cowboy hat thrown high in celebration (still in current use) – was the public design (the winner was Susan Holten, from Carrollton).[3]

Texas joined the Mega Millions consortium in 2003, with sales beginning December 3 and the first drawing to include Texas was two days later. Though no Texas ticket won the jackpot, one Texas-bought ticket matched the first five numbers for $175,000.[8] The first Texas jackpot winner of Mega Millions was not until the drawing of October 4, 2004; a Carrollton player took home the $101 million (annuity value) prize.

As part of the cross-selling arrangement between the operators of Mega Millions and Powerball, the Texas Lottery Commission agreed to begin selling Powerball tickets on January 31, 2010; the first drawing including Texas was three days later.

In 1997 a major scandal rocked the Texas Lottery. Accusations of fixed contracts with the company that manages the lottery surfaced. The scandal went away when the director simply appointed the previously accused management company as the winning bid after a different company had already been chosen. [9]

As with most US lotteries, players must be at least 18 years of age.

According to the Texas Lottery Commission, the allocation of lottery sales is as follows:[10]

Instant tickets, most changing frequently, cost $1 to $50 each. Texas is the only state lottery to offer $50 scratch off tickets.

Prizes have included not only cash (from $1 to the millions), and free tickets (which can be used to purchase any Texas drawing game), but also trucks, tickets to sports events, and tours of Cowboys Stadium.

Lotto Texas was the first Texas in-house drawing game offered, with sales beginning on November 7, 1992; its first drawing on November 14, 1992, and the first jackpot won on November 28, 1992. By its first anniversary, the Texas Lottery sold over $1 billion in tickets.[13]

Initially sold as an annuity game with no cash option, and the purchaser having to pick numbers, and the drawings held only on Saturdays, Lotto Texas later added the "Quick Pick" option (random selection of numbers, added on May 29, 1993, the Lottery's first anniversary),[14] the "Cash Value" option,[15] and changed the drawings to twice weekly, adding Wednesdays.

Among notable winners was Thomas "Hollywood" Henderson, the former Dallas Cowboys linebacker, who claimed a winning jackpot in excess of $14 million in 2000.[16]

The current format utilizes 54 balls; players choose 6 numbers. The jackpot is paid either in 25 annual payments, or in lump sum (discussed further below). Non-jackpot payments are in lump sum. Each game costs $1, the minimum jackpot is $4 million, and drawings are held at 10:12 PM Central time on Wednesdays and Saturdays.

The current format utilizes a 4+1 matrix using two sets of numbers 1 through 35). Players choose five numbers; four from the first set of 35 white balls, and the fifth Bonus Ball from a set of 35 red balls. All payments, including the jackpot, are in lump sum. Each game is $1, the minimum jackpot is $200,000, and drawings are held at 10:12 PM on Mondays and Thursdays.

Texas Two-Step's jackpot is always paid in lump sum; as such, it is the only Texas Lottery jackpot game not to require players to choose cash or annuity when playing (see below.)

The current format utilizes one set of 37 balls; players choose five numbers. All payments are in lump sum. Each game costs $1; and drawings are held at 10:12 PM Central time Mondays through Saturdays.

Overall odds of winning are 1:8.

For exact odds of winning see this link: How to Play Pick 3

For exact odds of winning see: How to Play Daily 4

In 2003, the Texas Lottery joined the Mega Millions consortium.

The current format utilizes one set of 56 white balls, and a second set, of 46 yellow balls (the "Mega Ball"). Players choose six numbers; five white ball numbers, and the "Mega Ball" from the second set. Jackpots are paid in either 26 annual payments or in cash; see below on jackpot choices. Non-jackpot payments are in lump sum. Each game costs $1, the minimum jackpot is $12 million, and drawings are held at 10:12 PM Central time on Tuesdays and Fridays.

Texas, as in most Mega Millions jurisdictions, offers an option, called Megaplier feature (similar to Powerball's PowerPlay; see below) which multiplies non-jackpot prizes by either 2, 3, or 4.

On October 13, 2009, the Mega Millions consortium and MUSL (the operator of Powerball, the other major US lottery game) reached an agreement in principle for lotteries, at their option, to cross-sell Mega Millions and Powerball; the earliest date agreed on was January 31, 2010.

The Texas Lottery Commission elected to participate in the agreement; on November 17, 2009 voted to publish Powerball rules for public comment. On December 14, 2009 the Commission held a public hearing, receiving comments on the proposal to join Powerball.

On January 6, 2010, the Commission voted 3-0 to join Powerball. Texas sales for the game began on January 31, 2010, with the first drawing including Texas was conducted three days later.[24]

Unusually, Texas Lottery regulations require players to choose either cash value option (CVO) or annual pay (AP) when playing Lotto Texas, Mega Millions, and/or Powerball (other lotteries generally allow players to make the cash/annuity choice after winning, including winners of annuitized scratch-game prizes.) The choice when playing in Texas is binding. All three games mentioned above (including Mega Millions and Powerball within Texas) have "AP" as the default option; that is, if the choice is not marked on the playslip, or if the player selects "Quick Pick" and the retailer does not press the CVO button, the ticket(s) is/are marked "ANNUAL PAY". The Texas Lottery is the only one offering Powerball that does not allow CVO to be chosen after winning Powerball.