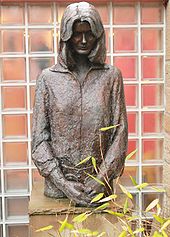 Statue of Maggie Jencks at Maggie's Centre in Edinburgh

Maggie's Cancer Caring Centres are a network of drop-in centres in Great Britain, which aim to help anyone who has been affected by cancer. They are not intended as a replacement for conventional cancer therapy, but as a caring environment that can provide support, information and practical advice. They are located nearby, but are separate from, existing NHS hospitals.

The Scottish registered charity (registration number SC024414) which promotes, builds and runs the centres is formally named the Maggie Keswick Jencks Cancer Caring Trust, but refers to itself simply as Maggie's. It was founded by and named after the late Maggie Keswick Jencks, who died of cancer in 1995. Like her husband, architectural writer and critic Charles Jencks, she believed in the ability of buildings to uplift people. The buildings that house the centres have been designed by leading architects, including Frank Gehry, Zaha Hadid and Richard Rogers.[1]

The first Maggie's Centre opened in Edinburgh in 1996, and is located within the Western General Hospital on Crewe Road. The centre is housed in a converted stable block. The conversion, designed by Richard Murphy, was nominated for 1997 Stirling Prize. The centre was extended, again by Murphy, in 1999.

The Maggie's Centre in Glasgow is located at the Western Infirmary on Dumbarton Road, near the Kelvingrove Museum. The centre is housed in a former gatehouse lodge of the University of Glasgow, renovated and altered by Page\Park Architects. Charles Jencks designed the landscaping around the site, and contributed a DNA sculpture for the garden. 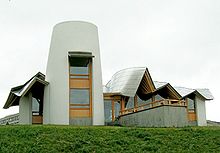 Frank Gehry's first building in the United Kingdom was the Maggie's Centre at Dundee. The centre opened in September 2003 at Ninewells Hospital. Gehry's design was named "Building of the Year" by the Royal Fine Art Commission for Scotland, and was also nominated for the 2004 RIAS Andrew Doolan Award for Architecture.

The Maggie's Centre in Inverness, Highland, is at Raigmore Hospital, and was designed by Page\Park Architects. Landscape design and sculptures were again the work of Charles Jencks. The building opened in 2005, and won the 2006 RIAS Andrew Doolan Award for Architecture. 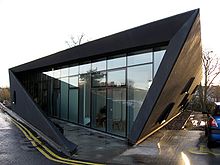 The Maggie's Centre in Kirkcaldy, Fife, opened in November 2006 at the Victoria Hospital. The building was designed by Zaha Hadid, and is her first built work in the UK.[3] 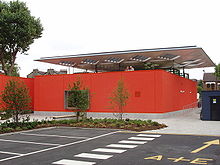 The Maggie's Centre in London is located at Charing Cross Hospital, west London. Opened in April 2008, the centre was designed by Rogers Stirk Harbour + Partners and is the first purpose-built Maggie's Centre in England. In May 2009 the centre won a RIBA award for architectural excellence and was named as London Project of the Year.[4] On October 17, 2009 Richard Rogers and his team at Rogers Stirk Harbour + Partners were awarded the Stirling Prize for the building, and subsequently donated the £20,000 prize money to the cancer care centre.

Maggie's Cheltenham, beside Cheltenham General Hospital, was opened by HRH The Duchess of Cornwall in October 2010. The centre was designed by Sir Richard MacCormac and the landscaping was designed by Dr Christine Facer.[5]

In addition to its established centres, Maggie's also has an Online Centre, free for anyone affected by cancer to use. The centre acts as a way for people to meet others in similar circumstances, support each other, learn about healthy living and relaxation and also get help in coping with difficult emotions. The Online Centre also offers users the opportunity to take part in live online chat sessions led by a clinical psychologist.

Maggie's offer an interim service in the following areas:

Christian Voice has been criticised for its role in causing Maggie's Centres to decline a four-figure donation from the proceeds of a special performance of Jerry Springer: The Opera. The charity had been due to receive £10 per ticket for an afternoon gala but declined the donation after CV had threatened to picket their centres.[6]