The Partridge Family is an American television sitcom about a widowed mother and her five children who embark on a music career. The series originally ran from September 25, 1970 until August 31, 1974, the last new episode airing on March 23, 1974, on the ABC network, as part of a Friday-night lineup. It had subsequent runs in syndication.

Created for television by Bernard Slade, the series' Executive Producer was Bob Claver. It was inspired by and loosely based on The Cowsills,[1] an actual pop music family that had been famous in the late 1960s. In its early development, the Cowsill children were considered by the producers for featuring on The Partridge Family, but because they were not trained actors, Slade and Claver decided to abandon that idea.[2] Shirley Jones had already been signed as mother Shirley Partridge and star of the show. 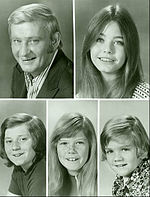 In the pilot episode, a group of musical siblings in the fictitious city of San Pueblo, California convinces their recently widowed mother, Shirley Partridge (Shirley Jones), to help them out by singing as they record a pop song in their garage. Through the efforts of precocious 10-year-old Danny, they find a manager, Reuben Kincaid (Dave Madden), who helps make the song a Top-40 hit. After some more persuading, Shirley agrees that the family can go on tour. They acquire an old school bus for touring, paint it with Mondrian inspired patterns, and depart to Las Vegas for their first live gig at Caesars Palace. The Partridge children were played by David Cassidy (Jones' real-life stepson) as her eldest son Keith, Susan Dey as Laurie, Danny Bonaduce as Danny, Jeremy Gelbwaks as Chris, and Suzanne Crough as Tracy.

Subsequent episodes usually feature the band performing in various venues or in their garage. The shows would often contrast suburban life with the adventures of a show business family on the road. After the first season, more of the show's action took place in their hometown rather than on tour.

At the end of the first season, Jeremy Gelbwaks' family moved out of the Los Angeles area, and the part of Chris was recast with actor Brian Forster.[3] A dog named "Simone" was featured in the first season, but was phased out during the second season. At the beginning of the fourth season, a four-year-old neighbor named Ricky Stevens (Ricky Segall) was featured and would sing a children's song during each episode, but was dropped mid-season. ABC moved the show from its 8:30 p.m. Friday night slot to Saturday at 8:00 p.m. (opposite CBS' top-rated All in the Family), and after 96 episodes and eight Partridge Family albums, the show ended. 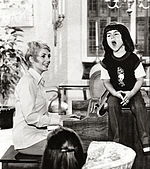 During its four season run, many actors made guest appearances on the show.

Bobby Sherman appeared in episode 25 (the last episode of the first season) as struggling songwriter Bobby Conway; this episode led into a short-lived spinoff series on ABC, Getting Together, starring Sherman and Wes Stern as Bobby Conway's business partner Lionel Poindexter.

Cast of The Partridge Family. Jeremy Gelbwaks was a cast member at the time; Brian Forster took over for him later.

The Partridge Family was produced for ABC by Screen Gems. The company promoted the show by releasing a series of albums featuring the family band, though most cast members did not actually play on the recordings.[6] Led by music producer Wes Farrell, a group of hired studio musicians (informally referred to as the Wrecking Crew) actually created the Partridge Family's sound. The harmonious background vocalists were brothers John and Tom Bahler, Jackie Ward and Ron Hicklin (initially the Ron Hicklin Singers). David Cassidy was originally to lip sync with the rest of the cast, but he convinced Farrell just weeks into production that he could sing and was allowed to join the studio ensemble as the lead singer.[6] He and Shirley Jones, who sang background, were the only cast members who were actually featured on the recordings.

Despite best attempts, the Partridge Family Theme, shown over opening credits, underwent more than one incarnation. Initial episodes feature the song "When We're Singin'" in place of the popular title later used, "C'mon Get Happy". The latter -- a play upon the 1920s song "Get Happy" which also features the tag "Come on, Get Happy (were gonna chase all your blues away)" -- was likely a hidden influence in the "wide-audience appeal" approach of the show and its music. Significant is the verse lyric that began the initial theme "When We're Singin'":

"Five of us, and Mom working all day,
we knew we could help her if our music would pay,
Danny got Reuben to sell our song, and it really
came together when Mom sang along..." (from "When we're Singin')

Later, when the new version appeared, it featured new lyrics sung to the "When We're Singin'" tune. With the new chorus finalized, "C'mon Get Happy" showcased the new verse:

"We had a dream, we'd go travelin' together,
We'd spread a little lovin' then we'd keep movin' on.
Somethin' always happens whenever we're together
We get a happy feelin' when we're singing a song... (from "C'Mon Get Happy")

Also of interest, when the first theme is replaced by Danny Janssen's new lyric, the "outro" credits music bed is also replaced, from the organ/horn call-and-response music, to a newer jazzy instrumental of the title theme, which Janssen likely saw no profit from, as it featured no lyric, only the Wes Farrell tune. In the pilot episode, an unreleased song, "Together (Havin' A Ball)", is featured prominently. This song is not the Partridge Family that we eventually would know, and does not feature Cassidy/Jones vocal layering later added to studio musicals and singers. The lyrics of "Together (Havin' A Ball)", as transcribed, were clearly intended to be in contention for the series theme. This song, which was never available on any Partridge LP, was likely buried by producers. However, thankfully for many fans, the song was finally released 35 years after the fact in 2005 on a 'Very Best of' CD compilation. The production was "very Saturday Morning" sounding, being written and recorded by the same folks who composed the theme for Josie and The Pussycats, among others. The lyric combines elements of current pop, The Beatles' Come Together, and Elvis Presley's personal slogan "TCB", or Taking Care of Business, along with narrative, "Just doin' their number" and "playin' and singin'" their "new sound." The song has been credited to The Love Generation, a group of LA studio musicians [similar to the Wrecking Crew] and jingle singers, but in reality these featured the background vocalists who recorded on ALL of the Partridge Family platters, so it is considered a lost track.

As the show and other associated merchandising took off,[clarification needed] David Cassidy became a teen idol.[7] The producers signed Cassidy as a solo act as well. Cassidy began touring with his own group of musicians, performing Partridge songs as well as hits from his own albums, to thousands of screaming teenagers in major stadiums across the USA, UK, Europe, Japan and Australia.

The Partridge Family's biggest hit came in 1970 with the song I Think I Love You, written by Tony Romeo (who had previously written several of the Cowsills' hits), peaked at Number 1 on the Billboard charts in December of that year. It sold over five million copies, was awarded a gold disc, and made the group the third fictional artist to have a #1 hit (after The Chipmunks and The Archies).[8] The song's companion LP, The Partridge Family Album, reached Number 4 in the Billboard 200. It was also awarded a gold disc by the R.I.A.A. in December 1970, having sold over one million copies.[8] A string of hit Partridge singles followed: "Doesn't Somebody Want to Be Wanted", "I'll Meet You Halfway", "I Woke Up In Love This Morning", "It's One Of Those Nights (Yes Love)", "Am I Losing You", "Looking Through The Eyes Of Love", "Breaking Up Is Hard To Do", and "A Friend And A Lover."[9] These singles were showcased on million selling albums including "Up To Date", "Sound Magazine", "Shopping Bag", "Notebook", "Crossword Puzzle", and "Bulletin Board."[10] The Partridge Family's "Christmas Card" album was the #1 selling Christmas record of 1971. Record sales success was replicated internationally with The Partridge Family achieving huge hits in Canada, Great Britain, Europe, Japan, Australia and New Zealand.

In the midst of his rise to fame, David Cassidy soon grew tired of the show.[11] In the summer of 1972, he gave an interview to Rolling Stone magazine in which he attempted to distance himself from the squeaky-clean image of Keith Partridge.[citation needed]

Though Danny Bonaduce was not part of the session band, he, too, got a recording contract, and circa 1972 released a self-titled album, Danny Bonaduce. Though Bonaduce was credited as lead singer on all the songs, he insists that he had a very weak voice and that Bruce Roberts provided most of the vocals on the album. The first track on the album, a song entitled "I'll Be Your Magician", in which the 13-year-old Bonaduce seduces a woman into having sexual intercourse with him, has developed a cult following for its campy entertainment value. The original, watered-down, version of the song was recorded with Cassidy for the "Sound Magazine" album, but it was discarded and never released. In fall 2010, Cassidy dared Bonaduce to learn how to play the bass guitar lines on the songs the Partridge Family performed. Bonaduce learned the bass guitar line for "Doesn't Somebody Want to Be Wanted", stating that although he had no ability to read music, the song was relatively easy to learn; Cassidy and Bonaduce have performed together on rare occasions since that time.[12]

The Partridges had a brief resurgence in animated form which saw the family propelled into the future. The animated Partridges first appeared when the kids did a series of guest spots on Goober and the Ghost Chasers. That idea evolved into a CBS Saturday morning Hanna-Barbera-produced cartoon in 1974, Partridge Family 2200 A.D. (also called The Partridge Family in Outer Space when rerun later as part of Fred Flintstone and Friends). Shirley Jones and David Cassidy did not voice their animated counterparts, and Susan Dey and Dave Madden had very limited involvement with this cartoon. During a Feb. 2, 2008 interview with Mark Simone on WABC Radio's Saturday Night Oldies show, Jones had no recollection of any animated version of the series ever being produced.[citation needed]

Nickelodeon featured a run of The Partridge Family in the mid-90s as part of its Nick-At-Nite lineup. The network used interviews and commercials featuring cast members, and created a new version of the bus for promotion. The show also aired at various times on Fox Family, ION Television, and Hallmark Channel. As of January 2011[update], it airs on Antenna TV.

The cast was reunited in the 90's on the Arsenio Hall Show and The Danny Bonaduce Show and were featured on The E! True Hollywood Story, Biography and VH1's Behind The Music.

When the digital subchannel Antenna TV premiered in January 2011, The Partridge Family became one of its offerings through the network's distribution agreement with Sony Pictures Television (parent company of series producer Screen Gems).[13][14][15][16]

Sony Pictures Home Entertainment has released all 4 Seasons of The Partridge Family in DVD Region 1. Seasons 1 and 2 have been released in region 2 and 4.