Aldbourne is a village and civil parish about 6 miles (10 km) northeast of Marlborough in Wiltshire, England. It is in a valley in the south slope of the Lambourn Downs, part of the North Wessex Downs Area of Outstanding Natural Beauty. From here an unnamed winterbourne flows and joins the River Kennet 4 miles (6.4 km) south near the village of Ramsbury.

The Church of England parish church of Saint Michael overlooking the village green is medieval and a Grade I listed building.[2] The nave and aisles were built around 1200, although some earlier Norman arches and other traces remain. There are four arches on the north arcade and three on the south. The chancel is Early English, with north and south chapels, and a sanctuary with lancet windows.

The Perpendicular Gothic three-stage tower was added in 1460. It is ashlar, has angled buttresses and transomed three-light bell openings, with gargoyles above. There are also transepts with three-light windows, a tall south porch – originally two-storey – and a bay between the porch and south transept. There was also formerly a north porch. The external walls are of flint and limestone with some chequer work and sarsen, and are crenellated. The roofs are lead and slate. The interior contains a number of monuments and monumental brasses. 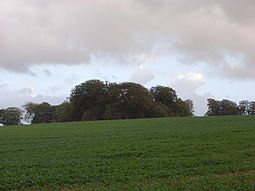 Lewisham Castle is a small medieval ringwork about 1.5 miles (2.4 km) south-west of the village.[4] It is not certain whether it was in fact a castle.[4]

During the English Civil War Prince Rupert and his Cavaliers fought the Parliamentarian Army in a skirmish at Aldbourne Chase on the 18th September 1643, two days before the First Battle of Newbury.[5]

Easy Company of the US Army 101st Airborne Division was based at Aldbourne in the weeks before D-Day.[6] Easy Company was featured in the HBO series Band of Brothers.

In 1971 BBC Television used Aldbourne extensively as a location for the village of Devil's End in its science fiction drama Doctor Who in a series called The Daemons. St Michael's parish church was destroyed at the climax of the series and one viewer wrote to complain about this wanton piece of destruction for the sake of drama, but the BBC had used a model for this special effect.[7] 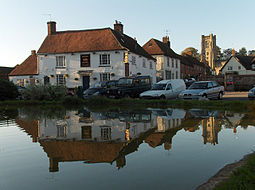 Aldbourne has two public houses: the Blue Boar[8] and The Crown.[9]

People from Aldbourne are nicknamed "Dabchicks", after the Little Grebe. This is said to have begun as an insult by the residents of nearby Ramsbury, but it has been adopted as a badge of pride.

The Aldbourne Band is an award-winning brass band that has won many national competitions.[10]