Nanyang Technological University (Abbreviation: NTU) is one of the two largest public universities in Singapore with the biggest campus in Singapore and the world's largest engineering college. Its lush 200-hectare Yunnan Garden campus was the Youth Olympic Village[2] of the world's first 2010 Summer Youth Olympics[3] in 2010. One of the fastest-growing research universities in the world, NTU's share of competitive research funding has increased sevenfold since 2005, with significant funds devoted to the setting up of two Research Centres of Excellence – the Earth Observatory of Singapore[4] and the Singapore Centre on Environmental Life Sciences Engineering.[5]

School of Art, Design and Media 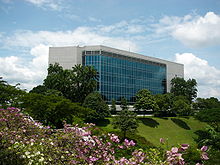 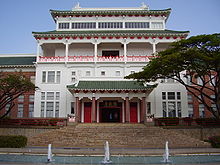 NTU has 33,500 undergraduate and postgraduate students in the colleges of Engineering, Business, Science, and Humanities, Arts, & Social Sciences, and many world-class scientists[6] among its faculty. In 2013, NTU will accept its first batch of medical undergraduates at its new joint medical school[7] with Imperial College London, the Lee Kong Chian School of Medicine, which received philanthropic support of S$400 million within months of its establishment in Singapore. NTU will have its third campus in Novena, Singapore's medical district, and its first campus in China, the NTU Tianjin College,[8] by 2013. NTU is also the first Kauffman Campus outside the United States, spearheading entrepreneurship in Asia.

A founding member of the Global Alliance of Technological Universities,[9] NTU aims to groom active citizens of the world who can lead and manage new complex global challenges, such as in the energy, environment and healthcare sectors. The university has launched its five-year strategic blueprint, NTU 2015,[10] to scale Five Peaks of Excellence – Sustainable Earth, Future Healthcare, New Media, New Silk Road and Innovation Asia – and set new global benchmarks in research, education and innovation. NTU is already a world leader in sustainability research and education, having clinched more than S$830 million in research funding in this area to date.[11]

Two major initiatives complement the NTU 2015 strategic blueprint. They are an ambitious Campus Master Plan,[12] which will integrate teaching, research, residential and recreational functions campus-wide to foster greater interactivity among members of the NTU community, and a makeover of undergraduate education with holistic changes to the curriculum and campus environment.[citation needed]

Other Institutes and Centers

The Campus Master Plan is guided by sustainability principles and involves transforming the campus grounds into a "univer-city" with a bustling campus centre, new halls and trendy spaces that sustain new approaches to learning, research and relaxation.[13]

NTU initiated its makeover of the undergraduate experience[14] to give NTU students the edge in tomorrow's global economy – as creative leaders with a strong social conscience, a love for learning, strong leadership and teamwork skills, and familiarity with real-world issues such as new sustainability challenges. The education revamp covers five broad areas – the academic experience, student life, career development, teaching excellence and infrastructural changes. Students will have more time for group-based learning and self-reflection, as well as the flexibility to tailor their curriculum to meet their unique interests and strengths. New interdisciplinary options in Liberal Studies and a compulsory core module in Environmental Sustainability will be introduced. Students can also look forward to new opportunities for overseas exchange and an enhanced IT-enabled campus environment as part of NTU's "Cool Campus"[15] drive. New academic programmes include the dual-degree Renaissance Engineering Programme[16] that melds engineering with business to groom future CEOs and CTOs; new double degree programmes; a new undergraduate degree programme in Earth and Environmental Sciences (to be offered from 2012); and the much-anticipated undergraduate medical degree programme with Imperial College London at the Lee Kong Chian School of Medicine in 2013.

NTU’s College of Engineering is the 7th most cited in the world,[19] while its business school's MBA is ranked among the top 35 worldwide[20] . The S Rajaratnam School of International Studies is ranked first among university-affiliated think tanks in Asia and 13th globally.[21]

The Nanyang Chronicle is the campus' largest print and web news outlet, with a print circulation of approximately 15,000. Serving primarily NTU staff and students, the Chronicle is distributed across the campus on newsstands and is published once every three weeks. It is run entirely by a team of student editors with guidance from teacher advisors from the Wee Kim Wee School of Communication and Information (WKWSCI).

It was first published in July 1994 with the aim of providing timely campus news and information, as well as being the voice of the campus population. The paper also provides practical training for undergraduates who are keen to work in the field of journalism after graduation.[22]

As of 2011, the chief editor is Cassandra Yeap and the Chinese editors are Teo Jion Chun and Grace Chew.

To supplement the fixed-line campus network, NTU implemented a campus-wide wireless network in 2000. This high-speed wireless network, capable of a transfer rate of up to 11 megabits per second, enables NTU staff and students equipped with mobile devices such as notebooks, PCs and PDAs to access all networked services from practically anywhere on the campus without the need of a hardwired network connection.

NTU provides e-learning services via edveNTUre, which is based on BlackBoard technology, provides the framework and eco-system for learning and teaching. Besides providing a repository of lecture recordings, lecture notes, it also facilitates learning activities for collaboration, discussion, assessment and project work. During term time, the usage typically by faculty and students exceeds nine-million page views weekly (Jan 2010).