The earliest source of information for the life of Muhammad (ca. 570/571 – June 8, 632 AD) is the Qur'an, which gives very little information, and is of questioned historicity itself.[1][2] Next in importance is the sīra literature and Hadith, which survive in the historical works by writers of third and fourth century of the Muslim era (900−1000 AD).[3] There are also a few non-Muslim sources which are valuable both in themselves and for comparison with the statements in the first two sources.[4]

At present, the study of Muhammad, the founder of the Muslim community, is obviously caught in a dilemma. On the one hand, it is not possible to write a historical biography of the Prophet without being accused of using the sources uncritically, while on the other hand, when using the sources critically, it is simply not possible to write such a biography [2]

Sources for the historical Muhammad 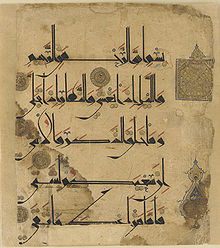 The main source on Muhammad's life are Muslim sources written in Arabic, which include the Qur'an and accounts of Muhammad's life written down by later Muslims, based on oral traditions. These sources are known as sīra and hadith.

There are also non-Muslim sources written in Greek, Syriac, Armenian, and Hebrew by the Jewish and Christian communities.[2]. These non-Muslim written sources go back to about 636 AD and many of the interesting ones date to within some decades later. One, attributed to a 7th century Armenian scholar Sebeos, states that Muhammad was a merchant and that his preaching revolved around the figure of Abraham. There are also confirmations of Muhammad's migration from Mecca to Medina in them. However, they also contain some essential differences with regard to Muslim sources and in particular about chronology and about Muhammad's attitude towards the Jews and Palestine.[2]

The Qur'an itself has some, though very few, incidental allusions to Muhammad's life.[2] However, the "Qur'an responds constantly and often candidly to Muhammad's changing historical circumstances and contains a wealth of hidden data that are relevant to the task of the quest for the historical Muhammad."[1]

In the sīra literature, the most important extant biography are the two recensions of Ibn Ishaq's (d. 768), now known as Sīrat Rasūl Allah ("Biography/Life of the Messenger/Apostle of Allah"), which survive in the works of his editors, most notably Ibn Hisham (d. 834) and Yunus b. Bukayr (d.814-815), although not in its original form.[1] According to Ibn Hisham, Ibn Ishaq wrote his biography some 120 to 130 years after Muhammad's death. Many, but not all, scholars accept the accuracy of these biographies, though their accuracy is unascertainable.[2] After Ibn Ishaq, there are a number of shorter accounts (some of which are earlier than Ibn Ishaq) recorded in different forms (see List of earliest writers of sīra). Another biography of Muhammad is that of al-Waqidi's (d. 822) and then Ibn Sa'd's (d.844-5). Al-Waqidi is often criticized by early Muslim historians who state that the author is unreliable.[1] These biographies are hardly biographies in the modern sense. The writers did not wish to record the life of Muhammad, but rather to describe Muhammad's military expeditions and to preserve stories about Muhammad, his sayings and the reasons of revelations and interpretations of verses in the Qur'an.[1] In addition to sīra, the biographical dictionaries of Ali ibn al-Athir and Ibn Hajar provide much detail about the contemporaries of Muhammad but add little to our information about Muhammad himself.[7]

Lastly, there are the hadith collections, which include traditional, hagiographic accounts of the verbal and physical traditions of Muhammad. These date two to three hundred years after after the death of Muhammad. The main feature of hadith is that of Isnad (chains of transmission). The majority of Western academics view the hadith collections with caution as accurate historical sources.[8] However, other Western historians have also defended hadith and the general authenticity of Isnad.[9]

Historical authenticity of the Qur'an

The Uthman Qur'an, dated to the early 9th century. It is an alleged 7th century original of the edition of the third caliph Uthman but this is disputed by some owing to its 9th century kufic script. This Qur'an is located in the small Telyashayakh mosque in Tashkent.[citation needed]

All or most of the Qur'an was (according to traditional Islamic scholarship) written down by Muhammad's companions while he was alive, but it was primarily an orally related document. The written compilation of the whole Qur'an in its definite form as we have it now was not completed until many years after the death of Muhammad.[10]

The Qur'an is widely regarded by Muslims to be that which issued from Muhammad's mouth from AD 610-632. F.E. Peters states, "Few have failed to be convinced that what is in our copy of the Quran is, in fact, what Muhammad taught, and is expressed in his own words... To sum this up: the Quran is convincingly the words of Muhammad, perhaps even dictated by him after their recitation".[6] Peters argues that "The search for variants in the partial versions extant before the Caliph Uthman’s alleged recension in the 640s (what can be called the 'sources' behind our text) has not yielded any differences of great significance." . [6]

Patricia Crone and Michael Cook challenge the traditional account of how the Qur'an was compiled, and the historicity of Muhammad himself, writing that "there is no hard evidence for the existence of the Koran (or Muhammad) in any form before the last decade of the seventh century." They also question the accuracy of some the Qur'an's historical accounts.[11] It is generally acknowledged that the work of Crone and Cook was a fresh approach in its reconstruction of early Islamic history, but their alternative account of early Islam has been almost universally rejected.[12] Van Ess has dismissed it stating that "a refutation is perhaps unnecessary since the authors make no effort to prove it in detail...Where they are only giving a new interpretation of well-known facts, this is not decisive. But where the accepted facts are consciously put upside down, their approach is disastrous."[13] R. B. Sergeant states: "Hagarism [the thesis of Crone and Cook]…is not only bitterly anti-Islamic in tone, but anti-Arabian. Its superficial fancies are so ridiculous that at first one wonders if it is just a ‘leg pull’, pure ’spoof’." However, it has attracted praise as well as criticism, although it has been so poorly received by Muslims, that, in an attempt to at least superficially vindicate the traditional hagiographic historiography of early Islam and Muhammad, that a hoax has circulated since 2006, relating a supposed phone conversation the originator of the hoax had with Ms Crone, wherein she was claimed to have retracted the work.[14]

Gerd R. Puin's initial study of ancient Qur'an manuscripts found in Yemen led him to conclude that the Qur'an is a "cocktail of texts", some of which may have been existent a hundred years before Muhammad. He later stated that "these Yemeni Qur'anic fragments do not differ from those found in museums and libraries elsewhere, with the exception of details that do not touch the Qur'an itself, but are rather differences in the way words are spelled."[15][11][16] Karl-Heinz Ohlig comes to the conclusion that the person of Muhammed was not central to early Islam at all, and that at this very early stage Islam was in fact an Arabic Christian sect (likely Ebionite, Arian and/or Nestorian, based on the recorded Ebionite faith of Khadija, Muhammad's first wife, and the Arianism and/or Nestorianism of her cousin, the monk Bahira, recorded by John of Damascus in the early 8th century) which had objections to the concept of the trinity, and that the later hadith and biographies are in large part legends, instrumental in severing Islam from its Christian roots and building a full-blown new religion.[17] John Wansbrough believes that the Qu’ran is a redaction in part of other sacred scriptures, in particular the Judaeo-Christian scriptures.[18][19] Prof. Herbert Berg writes that "Despite John Wansbrough's very cautious and careful inclusion of qualifications such as "conjectural," and "tentative and emphatically provisional", his work is condemned by some. Some of negative reaction is undoubtedly due to its radicalness...Wansbrough's work has been embraced wholeheartedly by few and has been employed in a piecemeal fashion by many. Many praise his insights and methods, if not all of his conclusions."[20]

There is considerable academic debate over the real chronology of the chapters of the Qur'an.[21] Carole Hillenbrand holds that there are several remaining tasks for the Orientalist Qur'anic scholars: Few Qur'anic scholars have worked on the epigraphy of the Dome of the Rock in Jerusalem whose foundation inscription dates to 72/692 and the antique Qur'an recently discovered in the Yemen, the Sana'a manuscripts. The Carbon-14 tests applied to this Qur'an date it to 645-690 AD with 95 percent accuracy. Their real age may be a good deal younger, since C-14 estimates the year of the death of an organism, and the process from that to the final writing on the parchment involves an unknown amount of time, and parchments were also re-used often.[21] Paleography has dated the San'a manuscripts to 690-750 AD.

It is often noted that a coherent image of Muhammad cannot be formed from the literature of sīra, whose authenticity and factual value have been questioned on a number of different grounds.[22] Wim Raven lists the following arguments against the authenticity of sīra:

Historical authenticity of the hadith literature

Early Muslim scholars were concerned that some hadiths may have been fabricated, and thus developed a whole science of hadith criticism (see Hadith studies) to distinguish between genuine sayings and those that were forged, recorded using different words, or were wrongly ascribed to Muhammad.

In general, the majority of western academics view the hadith collections with caution. Bernard Lewis states that "the collection and scrutiny of Hadiths didn't take place until "several generations" after Muhammad's death and that "during that period the opportunities and motives for falsification were almost unlimited."[8] However, some Western historians have defended hadith and the general authenticity of Isnad (chain of transmission).[9]