Muhammad's letters to the Heads-of-State

Muhammad's letters to the Heads-of-State

This is a sub-article to Muhammad in Medina.

Purported letter sent by Muhammad to Heraclius, emperor of Byzantium

After the Treaty of Hudaybiyyah, Muhammad decided to send letters to many rulers of the world, inviting them to Islam [1] [2][3]

Muhammad, according to the usually told Islamic historiography, sent ambassadors with such letters to Heraclius the emperor of Byzantium, Chosroes II the emperor of Persia, the Negus of Ethiopia, Muqawqis the ruler of Egypt, Harith Gassani the governor of Syria and Munzir ibn Sawa the ruler of Bahrain. The account as transmitted by Muslim historians reads as follows:

The letter to Chosroes II is similar except that it refers to Magians instead of the Arians. 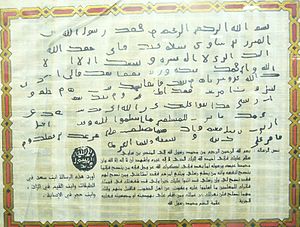 Letter of the Prophet Muhammed to Munzir ibn Sawa Al Tamimi.[5]. The top shows an original copy while the bottom is a modern reprint for clear representation.