The company is wholly owned by Chow Tai Fook Enterprises and NWS Holdings, which together also own the third largest operator, New World First Bus.[1]

From 1984 to 2001 the company offered a cross-border service (Hong Kong <> China) using mainly Leyland Olympians, but this was discontinued due to stiff competition. However, from 2007, Citybus began route B3, which goes to Shenzhen's Bay Port.

The livery of Citybus's buses is yellow, red and blue. 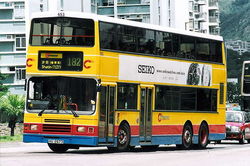 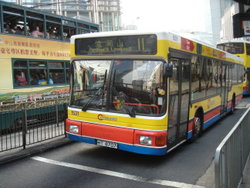 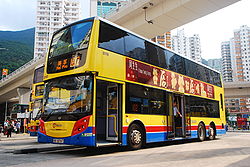 In 1979, Citybus began its operation in Hong Kong with one double deck bus (Volvo B55), providing shuttle service for the Hong Kong United Dockyard in Hung Hom. It later expanded into operating a residential bus route between City One Shatin and Kowloon Tong MTR station.

In 1991, the Hong Kong Government awarded Citybus its first franchised route 12A (Admiralty Tamar St <> Macdonnell Rd) on Hong Kong Island, which was originally operated by China Motor Bus and then withdrawn in the 1980s. It marked the arrival of Citybus as a franchised bus company serving Hong Kong Island routes. Also in 1991, several thousand miles away in London, Citybus launched a new company called Capital Citybus with an all-yellow livery for the routes in North and East London and a red and yellow livery for central London. This was sold to FirstGroup in 1998 and now trades as First Capital. In 1993, Citybus took over 28 franchised routes from China Motor Bus after winning a competitive tender. A further 14 franchised routes were awarded to the company in 1995 without tendering, with the fleet now expanded to more than 500 buses. During these years Citybus expanded its penetration of the Hong Kong Island market pushing nearly all CMB routes into low profitability. The areas of Hong Kong Island, especially Central, Wanchai and Causeway Bay, more and more CMB passengers chose Citybus rather than CMB.

In 1996, with the Tsing Ma Bridge coming into operation and commencement of settlement in the Tung Chung new town, Citybus won another tender to operate 13 new franchised routes serving Tung Chung and the new Hong Kong International Airport. The airport bus service, started in 1998, is called Cityflyer which is part of Citybus and is solely used for Airport express routes to the city. The Cityflyer service consisted of a series of 4 routes: A11, A12, A21 and A22, with A10 being added to the mix in 2006. Citybus also operates various Overnight Airport routes and Airport Shuttle Routes.

Its business was expanded into mainland China with a joint venture operation in Beijing through Citybus (China) Limited. It was not only Beijing's first joint venture bus operation, but it also marked the introduction of air-conditioned buses for the first time in the capital city. Following the success of this route, a second urban express coach route was introduced in Beijing. However, the services in Beijing were terminated shortly after the disposal of shares of Citybus (China) Limited from Citybus to Kingsman Global Limited, another Hong Kong company, in June 2004. Citybus had also once operated a route (route 658) in Tianjin. The service is now operated by another company after Citybus disposed all its interest in Citybus (China) Limited.

In 1999, Citybus was acquired by Stagecoach Group of the United Kingdom.

In 2001, Citybus discontinued the cross-boundary coach service between China and Hong Kong.

Refuses to rent bus for the First Hong Kong Pride 2008

Hong Kong Pride 2008 Organising Committee asks to rent an open top Double-Decker bus for the parade. However, Hong Kong Citybus refused to rent by base on concerns about its image. "This was a blatant act of discrimination, especially seeing the fact that this is a legal parade and the Hong Kong police have granted a permit," says Betty Grisoni, co-founder of a lesbian-rights organisation called Les Peches, which helped organise the parade. [2] A Citybus spokeswoman said on Dec. 11 that it would not discriminate against any party and that it was a commercial decision.