NWFB was established in 1998, taking over China Motor Bus's franchise on 1 September 1998 to provide bus services on Hong Kong Island together with Citybus. The company is wholly owned by Chow Tai Fook Enterprises and NWS Holdings, which together also own the second largest operator, Citybus.[1]

The company currently possesses just below 700 buses and operates just below 100 franchised routes. It has a patronage figure of 180 million every year. Since 18 August 2002, the entire bus fleet is air-conditioned (with the exception of one open-top bus until January 2008). All buses are equipped with the Octopus smart card payment system. Near 80% of the buses are Super Low Floor.[3]

Before NWFB started its operation, the franchised bus service in Hong Kong Island was provided by 2 companies, China Motor Bus (CMB) (franchisee since 1933) and Citybus (franchisee since 1991). In the early 1990s, the service of the CMB was in a steady decline. Therefore, the Government started to introduce new competitors by transferring the franchise of CMB routes to other companies.

As a result, Citybus became the 2nd franchisee of the bus service on Hong Kong Island. Over 40 routes were transferred between 1991 and 1995.[4][5](See the history part of Citybus for more details). 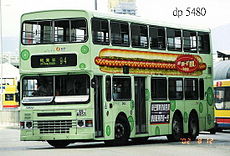 In spite of the loss of many profitable routes, the service of China Motor Bus did not show any significant improvement. On the contrary, CMB began to focus on its profitable real estate business. At the same time, negotiations between CMB and the Government on service improvements failed.

Finally, on 17 February 1998, the Government withdrew the franchise of all 140 routes operated by China Motor Bus, with effect from 1 September 1998. 88 of the 140 routes were placed on open tender, 12 routes were transferred directly to Citybus, 1 cross-harbour route to Kowloon Motor Bus, and the remaining routes were cancelled.

Back then, a joint venture called New World First Holdings, was established to bid on the tender. The company was owned by the First Group of UK with a 26% stake, and NWS Holdings Limited (SEHK: 0659, a subsidiary of New World Development) with 74% stake. In total 6 companies placed bids for the tender, those included: 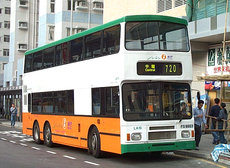 During the handover in mid-1998, NWFB faced a lot of difficulties since China Motor Bus was reluctant to cooperate with New World First Bus. After transport chaos when the old Hong Kong International Airport was moved to Chek Lap Kok on 6 July 1998, the Government and public were concerned about the handover of CMB on 1 September that year.

Eventually NWFB started its operation successfully at midnight 1 September 1998 after a series of negotiations and help from the Government. The official maiden departure of NWFB took place at 00:15 that night on Route N8,[7] with the first new bus in the fleet (Fleet No. 1001). However, NWFB had already started its operation of other non-overnight routes at midnight as CMB refused to operate after that time.

On its first day of operation, around 50 new buses were put into service. The remaining buses put in service are former CMB buses, with the New World First Bus logo stuck over the CMB logos and blue patches over the CMB corporate flag. 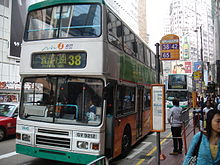 Refurbished Volvo Olympian VA42 in service. The vehicle in pre-refurbished state is as shown below.

Having purchased large numbers of second-hand buses from China Motor Bus, New World First Bus started an extensive program to refurbish them.[8] The floor, handrails, lighting system and seating layout were all upgraded from CMB-era designs to what they are today. The seating arrangement of buses were slightly modified. A typical refurbished bus accommodates 10 fewer passengers than one before refurbishment.

Air pollution problems were also addressed in the refurbishment program. When the buses were first acquired, none of them had catalytic converters installed. Now, they have been installed, reducing emission of polluting exhaust gases and particulates by 50%.

In 2004, it expanded its service to Kunming in Yunnan by setting up the joint venture Kunming New World First bus with the Kunming Government.[10] NWFB (China) is the major shareholder, holding 51% of share.

In June 2003, Citybus was acquired by NWS Holdings, the parent company of New World First Bus. As a result, the bus service of Hong Kong Island was once again under control of a single organisation.

Before the acquisition, many of the two companies' competing routes overlap each other. In order to make better use of company resources, many routes were reshuffled. Redundant routes were cancelled, and Octopus Card bus-bus interchange discounts were introduced between routes of both companies.[11] 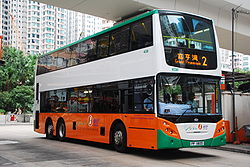 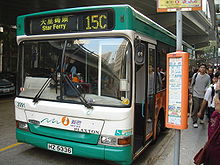 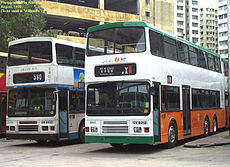 Two second-handed air-conditioned Volvo Olympian 11-metre buses from CMB. The right one had been repainted with the livery of NWFB, while the left one was still in the CMB livery.

The numbering of bus routes follow a logical pattern. 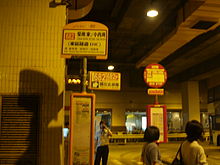 Most of these routes are jointly operated with Kowloon Motor Bus, but routes 680A, 682, 682P, 694, 970, 970X and 971 are solely operated by New World First Bus. For the jointly-operated routes, NWFB is responsible for all bus stop facilities in Hong Kong Island.

The same colour codes as those on Hong Kong Island apply for NWFB's Kowloon and New Territories Network. To distinguish NWFB routes from Kowloon Motor Bus routes, each route's number has 3 digits and all begin with 7.

All passengers on New World First Bus are required to pay the exact fare upon getting on the bus. The bus fare can be paid by cash or by Octopus Card. Children and Senior Citizens (people aged 65 or older) pay a Concessionary Fare, which is half of the full fare.

Sectional fares apply to some of the longer routes. If a passenger gets on the bus after a specified stop that situates further away from the start of the route, he/she may pay less. Furthermore, passengers of routes 14, 15 and N8P may also pay less if they do not wish to travel the entire length of the route.

The rebate can be accessed by Octopus Card or cash.

Apart from that, the passenger can place the sectional fare into the farebox. However, this is permitted at the discretion of the driver.

Ever since Citybus was acquired by NWFB's parent company, NWS Holdings introduced the Bus-bus Interchange Scheme to encourage passengers to change buses. Not only does this allow the passenger to save money, it also allows redundant routes to be cancelled.

The scheme is only available to users of Octopus Cards. When a commuter pays with an Octopus Card, the record of the bus route will be stored in the card. Then, as he boards any bus route supported by the scheme to continue his journey, a discounted fare will be deducted from his Octopus card, rather than the full fare.

For example, if a passenger boards route 23, and changes to route 23A in the Admiralty Gardens, he will not be charged any fare when he boards the 23A, as long as both journeys were paid for by Octopus Cards.[13]

As long as the passenger uses the same Octopus Card on both of his journeys, the discounted fare will be automatically deducted from his octopus card in the second journey.

For example, the single journey fare for route 682 is $18.20, hence the passenger will be charged only $16.40 on his second journey if he uses an Octopus Card.

To encourage people to go sightseeing on NWFB buses, a Value Pack[15] has been set up for the following 3 sets of routes:

From Central/North Point to Stanley:

From Stanley to Sai Wan Ho:

From Sai Wan Ho to Central:

The passenger is encouraged to travel around Hong Kong Island either in a clockwise or anticlockwise direction starting at Central or North Point, stopping at Stanley on the way. As long as he uses an Octopus Card and takes the bus in the correct sequence of routes, he will receive a $1 interchange discount on the 2nd and 3rd rides. 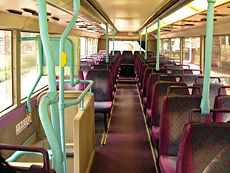 Interior of a NWFB Dennis Trident

In most buses, there are television screens installed on both the lower and upper saloon, known as FirsTVsion. They provide various entertainment programs, programs of Radio Television Hong Kong, as well as some advertisements. The television on NWFB was once operated by a Star East's (now See Corporation) subsidiary called M-Channel, and later it turned to be operated by NWFB's sister company and named the TV FirstVision. In 2005, RoadShow acquired FirstVision and started to broadcast their own programs on NWFB since early 2006.

Next stop indication and sight explanations

On routes like 15, a public address system has been installed on the bus, which tells the passengers where the next stop is. When the bus passes through certain sightseeing points, the PA system will also give a brief introduction of the sights. (e.g. Causeway Bay) Also, all Rickshaw Sightseeing buses (VA51-VA55) are fitted with PA systems.