Covance, Inc. (NYSE: CVD), formerly Corning Incorporated,[1] with headquarters in Princeton, New Jersey, USA, is a contract research organization (CRO), providing drug development and animal testing services. According to its website, it is one of the largest companies of its kind in the world, with annual revenues of over US$1.9 billion, operations in more than 25 countries, and over 10,000 employees worldwide.[2] It provides the world's largest central laboratory network, and employs a global team of clinical-trial professionals and cardiac-safety experts.[3] It became a publicly traded company after being spun off by Corning, Inc., in 1997. 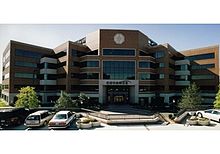 In the late 1980s and early 1990s, Corning Incorporated acquired numerous best-of-class drug-development companies, some with roots dating back to the 1940s. Covance began when Corning Glass Works consolidated its life sciences division in 1977. During this time, Corning acquired a small stake in Hazleton Laboratories Corp. This move lead to the full acquisition of Hazleton by Corning in 1987,[4] followed by the acquisition of clinical testing company G.H. Besselaar Associates in 1989[5] and SciCor Inc. in 1991.[6] These companies were merged under the subsidiary, Corning Lab Services, Inc., which later included Microtest, Ltd., a molecular-toxicology center.[7] In January 1997, Corning spun off these businesses as two publicly traded, independent companies called Covance, Inc., and Quest Diagnostics, Inc.

The company's primary focus is serving the pharmaceutical and biotechnology industries. As part of its clinical and non-clinical development services, Covance provides testing services to the environmental, food, and nutritional-supplement industries, and provides custom antibody products and services to the research community for neurological disorders. It also offers cell-type-specific marker antibodies for neuroscience; suites of products for both Alzheimer’s and Parkinson’s disease; and an online antibody store, including phospho-specific and secondary antibodies.

In May 2006, Covance also acquired Signet Laboratories, Inc., which is a provider of monoclonal antibodies used in the research of cancer, infectious disease and neurodegenerative disease.[13] On August 6, 2008, Covance purchased early drug development facilities in Greenfield, Indiana, from Eli Lilly for $50-million. In a contract valued at $1.6-billion, Covance will provide Eli Lilly with drug development services for the next 10 years. Covance will also provide services to other pharmaceutical and biotechnology clients at the Greenfield site. Covance will assume ownership of the site and operations on or about October 1, 2008.[14]

A division of the company, called Covance Research Products, Inc. (CRP), based in Denver, Pennsylvania, offers antibody products and antibody-development services to the research community. CRP also deals in the import and sale of laboratory animals.[15] It is the largest importer of primates in the U.S. and the world's largest breeder of laboratory dogs.[16]

According to its website, CRP provides canines, rabbits, and non-human primates for testing purposes. CRP has created and trademarked new breeds of animals, including the "Mini-Mongrel" dog.[15] The company also imports wild-caught primates. Covance's animal-testing programs and facilities are AAALAC-accredited, ISO 9001:2000-registered, OLAW-assured, and USDA-research registered.[17] The company claims that CRP programs and facilities are overseen by attending staff veterinarians and AALAS-certified technicians.[18]

Documents obtained from Hazleton in Yorkshire in 1984 by animal rights activists offered information about LD50 tests the company conducted on rabbits in 1980, which reportedly showed that paraquat was applied to the intact and abraded skin of New Zealand white rabbits. The animals were said to have had difficulty breathing, some were unable to move, and some suffered from anal bleeding and bleeding from the penis.[19] Former research chemist Robert Sharpe writes that, in the early 1980s, Hazleton in Harrogate stated that they had expertise in “non-standard” tests in the field of inhalation-testing and explosive gases, and used °non-standard” animal “models,” such as Japanese and Bobwhite Quails, Light Sussex Hens, Ring Necked Pheasants and Starlings, Rainbow Trout, Mirror Carp and Fathead minnows.[19]

In 2003, the British Union for the Abolition of Vivisection sent German journalist Friedrich Mülln undercover into the German Covance facility in Münster, Europe's largest primate-testing center. There, Mülln obtained photographs, video, and other evidence of alleged abuse of monkeys and other non-human primates.[20] The laboratory in Münster specializes in reproduction toxicology and primate toxicology, which includes testing on pregnant primates. It is believed to be one of the largest users of non-human primates in Europe.[21]

The undercover footage shows staff making monkeys dance in time to blaring pop music, handling them roughly, and screaming at them. The monkeys are shown isolated in small wire cages with little or no natural light and no environmental enrichment, and living with high noise levels caused by staff shouting and playing the radio.[22] In response, Covance maintained that clips showing different technicians working in different buildings had been edited together, resulting in a sequence of events that did not take place.[23]

Primatologist Dr. Jane Goodall described the living conditions of the monkeys as horrendous.[22] "To see a monkey alone in a cage like that, with nothing to do so that they go completely crazed with boredom and sadness probably, it's deeply, deeply disturbing."[21] Primatologist Stephen Brend told BUAV that using monkeys in such a stressed state is "bad science" and that trying to extrapolate useful data in such circumstances is an "untenable proposition."[22] The publicity in Germany gave rise to the "Close Covance" (Covance Schliessen) animal rights' campaign there, as well as campaigns launched in Britain by the BUAV, and in the U.S. by PETA. Nature reported that the company was in danger of losing its license.[20]

According to the European Biomedical Research Association, the local authorities in Munster inspected Covance after the video footage was shown on German television, and insisted that Covance install video cameras to monitor staff working with primates.[23] Covance appealed through the courts, which decided that video monitoring would infringe the rights of the staff. The public prosecutor's office also viewed the film and questioned witnesses. The prosecutor's office concluded that Covance "had not rendered themselves liable to prosecution," thus clearing the company of all charges.[23]

After parts of Mülln's footage were shown on German television and in major newspapers, Covance filed a lawsuit, leading a German court to forbid further distribution of the material. The publication ban led to major protests from animal-rights advocates and anti-censorship activists. A first ruling confirming Covance's claims was partially reversed by a higher court's ruling that the right of the public to be informed on the subject prevailed over the company's privacy rights. The video footage may now be displayed publicly, albeit not in the form of the existing television edition, but it may not be used by animal-rights groups.

Monkey in a restraint tube in a Covance lab in Vienna, Virginia, filmed undercover by People for the Ethical Treatment of Animals

People for the Ethical Treatment of Animals (PETA) found similar conditions in Covance's Vienna, Virginia, lab during an undercover investigation in 2004-5.[25]

In June 2005, Covance filed a lawsuit against PETA and its former employee for fraud, breach of employee contract, and "conspiracy to harm the company's business by deceitfully infiltrating and videotaping the company's Vienna, Virginia facility." Covance and PETA agreed to a settlement in which PETA accepted a five-year ban on attempts to infiltrate Covance facilities.[26] In a March 2006 statement, Covance announced that inspections of the Vienna, Virginia, facility by the Food & Drug Administration (FDA) “resulted in no findings to substantiate any claims made against the facility.” Inspections by the United States Department of Agriculture (USDA) resulted in sixteen citations ranging, according to Covance, from "administrative issues to scope of veterinary authority." The company agreed to pay a settlement of $8,720.[27]

In response to the controversy, Covance issued a statement undertaking to observe a number of principles, including treating the animals in its care with respect, abiding by all applicable laws and regulations, employing alternatives where appropriate, minimizing animal discomfort and stress, training employees, and encouraging them to report any misconduct.[28]